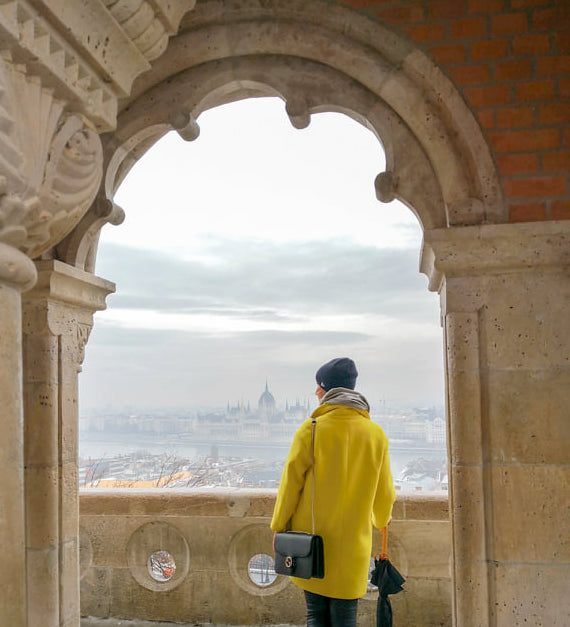 Yes, I know, I said I wouldn’t visit Budapest again in winter but I did, another 48 hours in Budapest!

Following an important meeting that my husband secured for his fund in London, we figured we’d extend our travels and fly out of another city in Europe, outside of Zagreb. Budapest seemed like the perfect option, the airport has great connecting flights to and from London and my husband had never been there before. It was my third visit to Budapest, again in winter. My pictures are no different to every other time, they are grey and gloomy… is the sky ever blue in Budapest? Also, this time around it was raining and it had recently snowed giving the rooftops an added winter in Europe look and feel. Regardless of it being winter, dull and cold, Budapest was still beautiful. 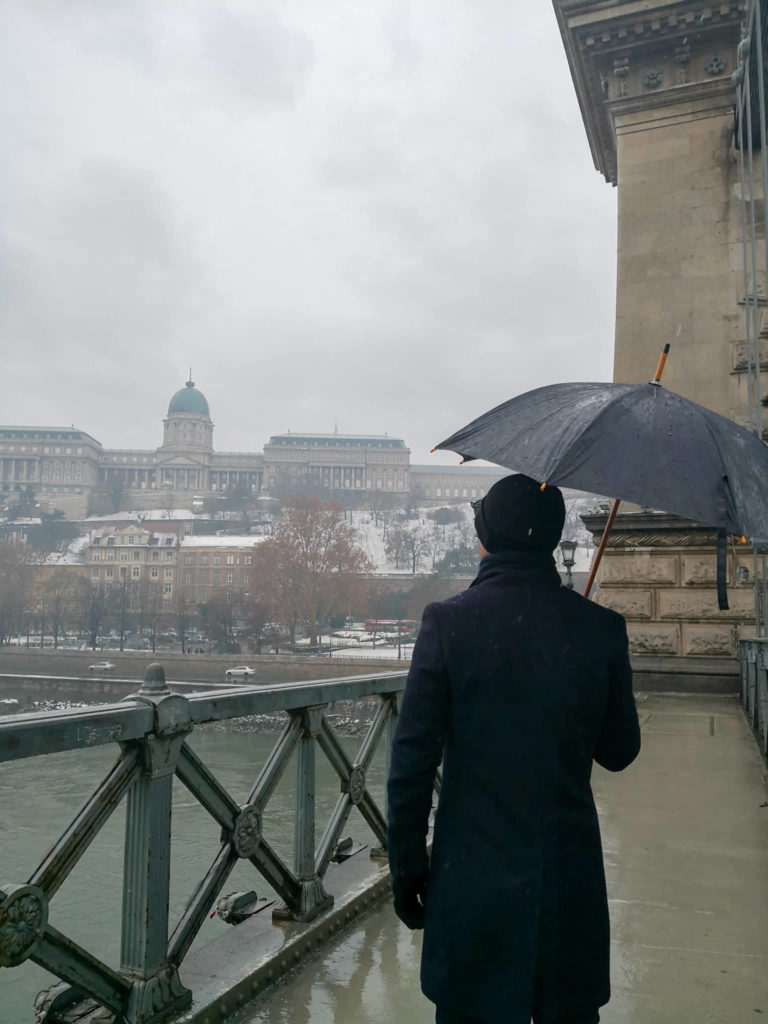 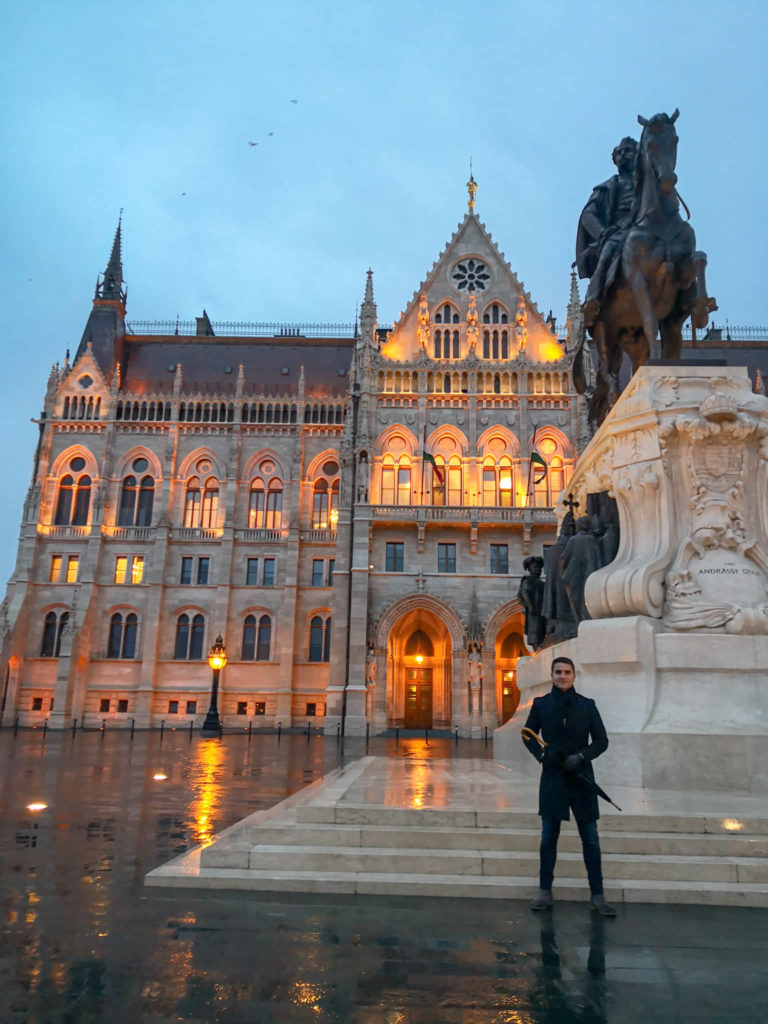 A friend in Zagreb asked me about how Advent was in Budapest. Truth is, it’s beautiful and very Christmassy but it has nothing on Zagreb, Advent in Zagreb has literally become an institution, one that gets better each year. I’m not being biased, it’s just a fact… Zagreb has the best Christmas market in Europe. That doesn’t detract away from the beauty and effort put into the Christmas markets in Budapest, it was still worth wandering around in and everything that you would expect from a European Christmas Market could be found at Advent in Budapest. 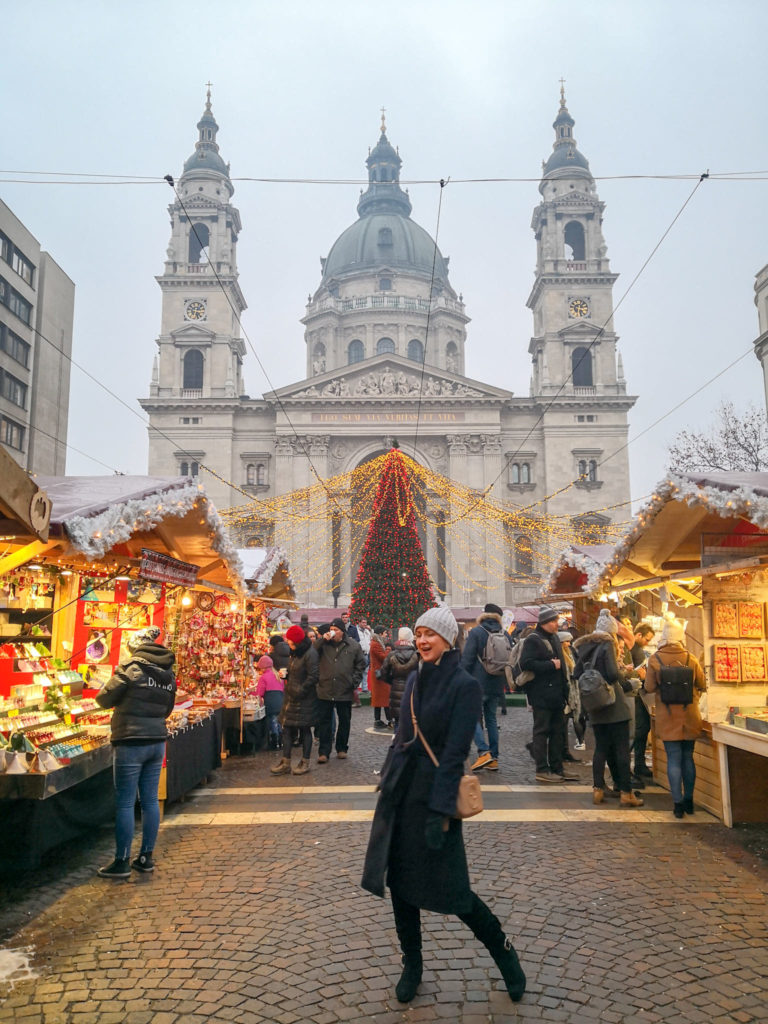 One of the main locations for Advent in Budapest the square in front of St. Stephen’s Basilica, which is also the largest Church in Budapest. 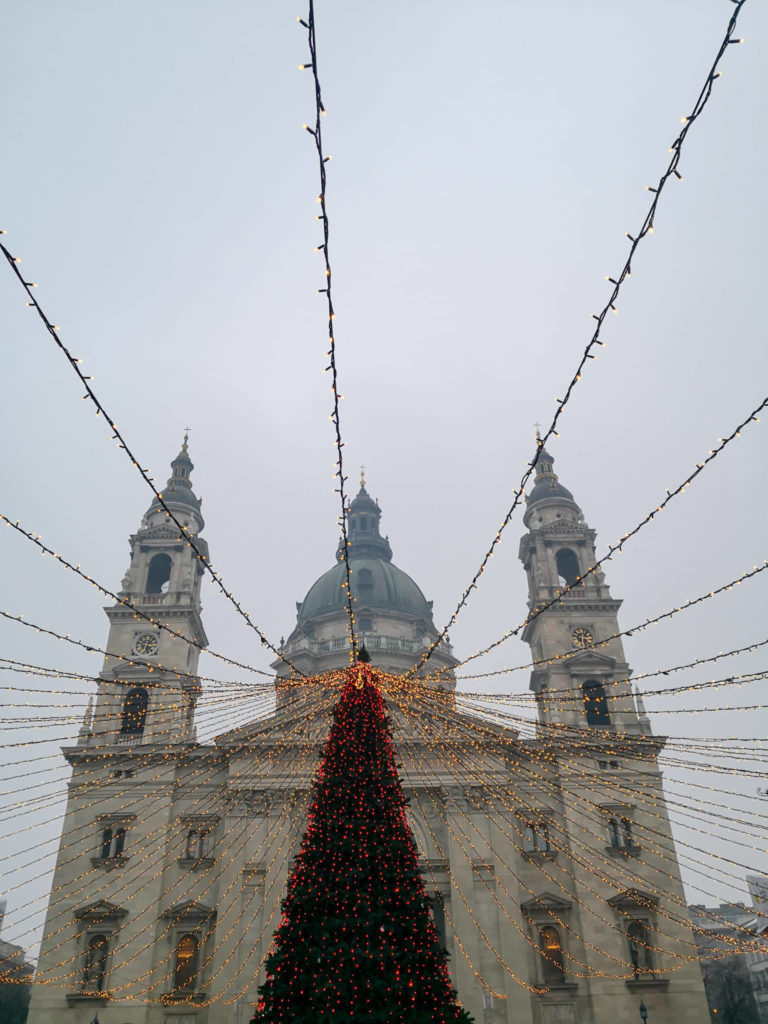 It was extremely cold and wet in Budapest when we visited but that didn’t stop us from heading out and exploring. Our hotel was located moments from Chain Bridge on the “Pest” side of Budapest but gave us the luxury of being able to walk to all attractions and monuments the city had to offer.

We walked by The Parliament building which is extremely easy to identify in Budapest, even more so at night when the entire building lights up the Danube River.

The Chain Bridge also comes to life at night, along with the Buda Castle which we had an incredible view of from our hotel room at the Intercontinental in Budapest. 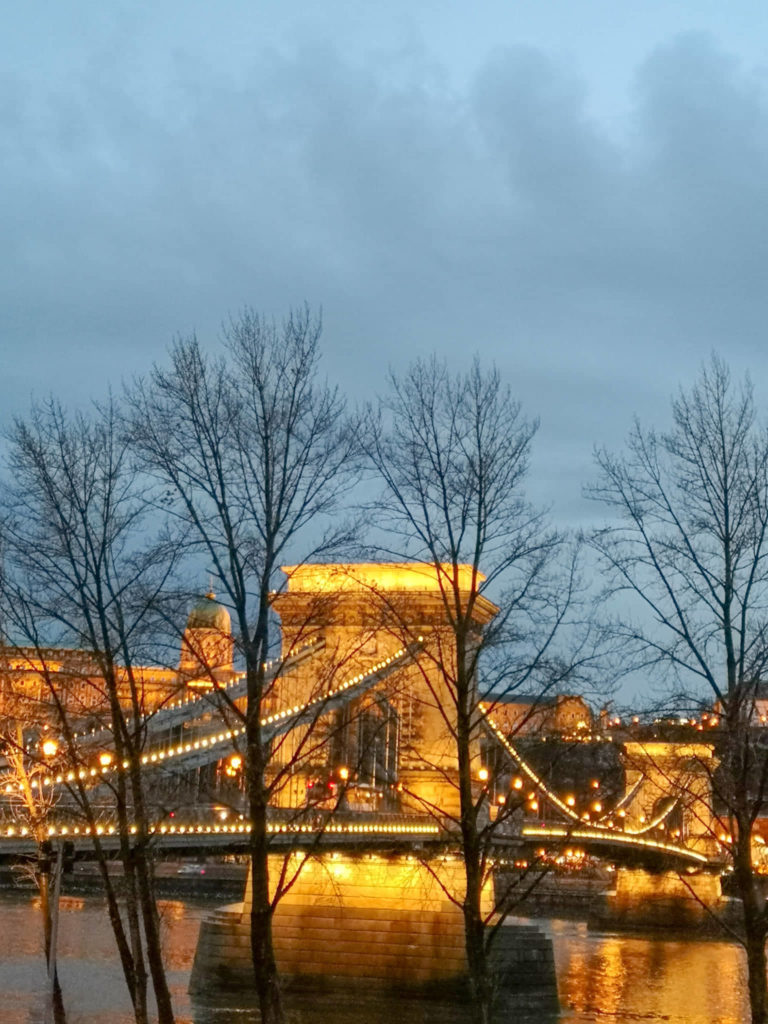 The Chain Bridge is about a 5-7minute walk from one end of Budapest to the other.

My favourite part of Budapest has always been Matthias Church. Not only is the Church absolutely breathtaking but also gives you uninterrupted views of Budapest’s “Pest” side. Matthias Church has been there since 1015 but like many churches around Europe was also a Mosque for 150 years once the Ottoman Turks took over. Today it is a Roman Catholic Church. 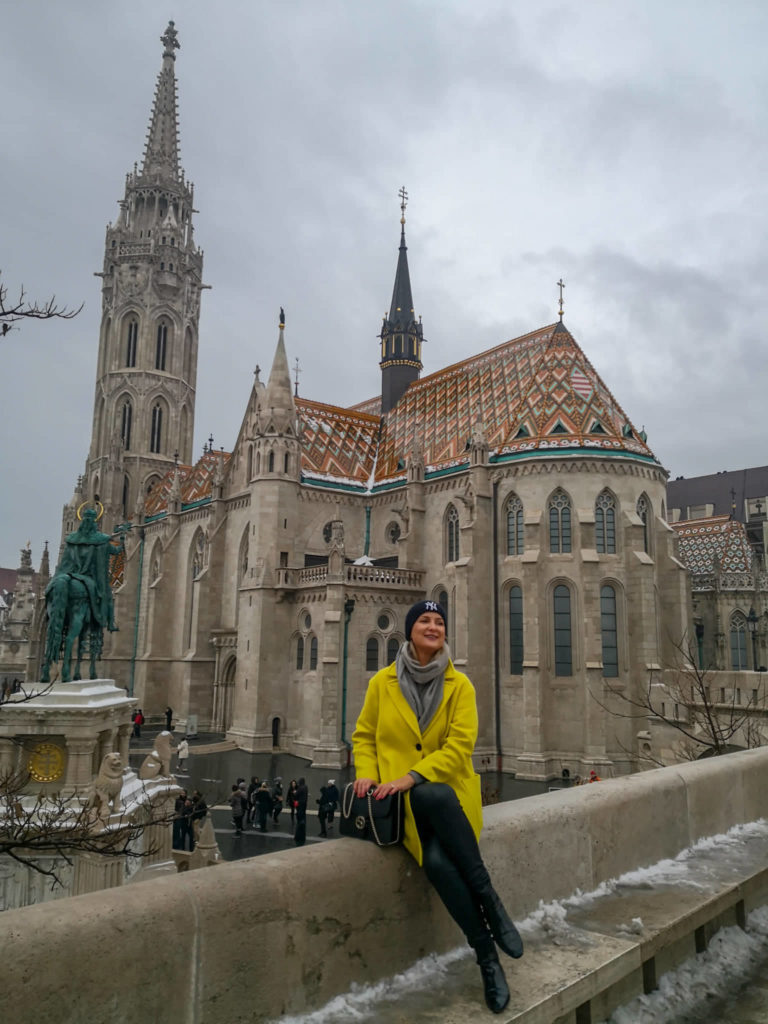 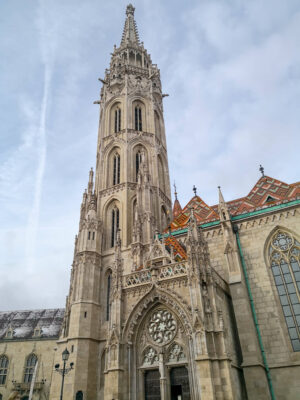 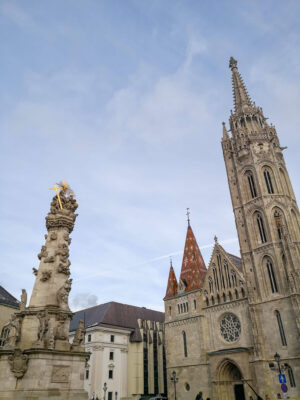 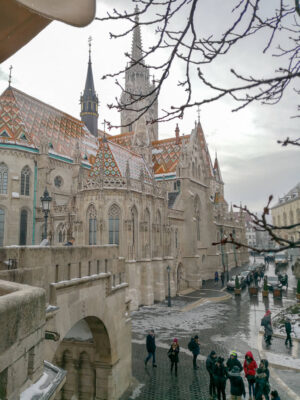 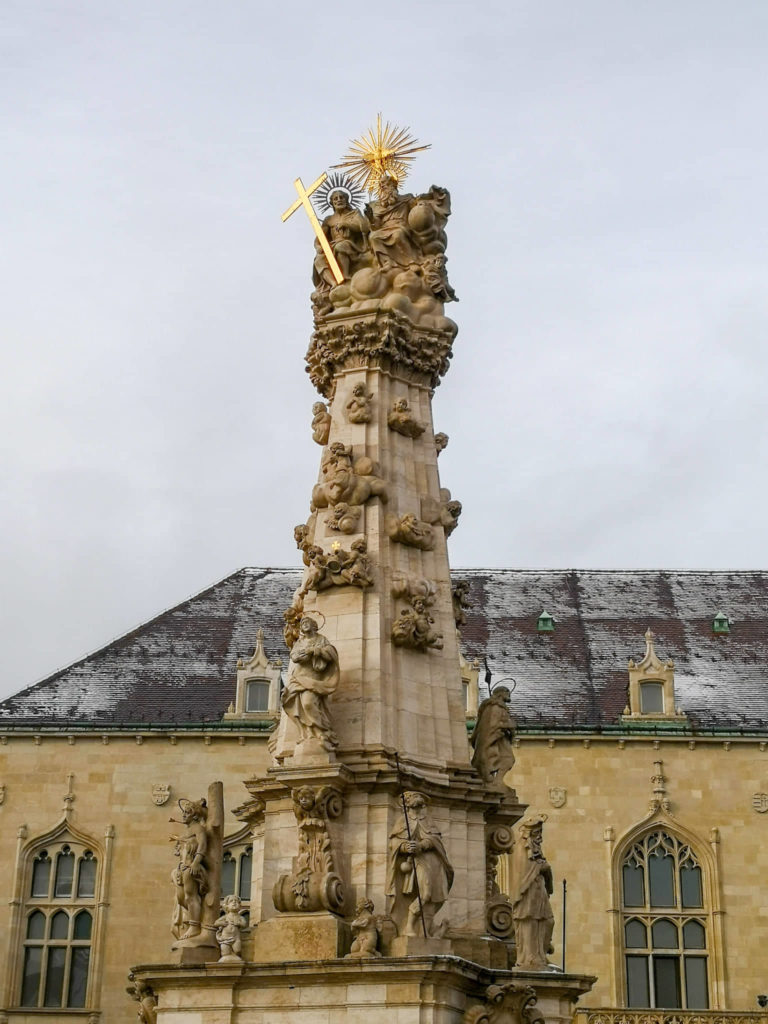 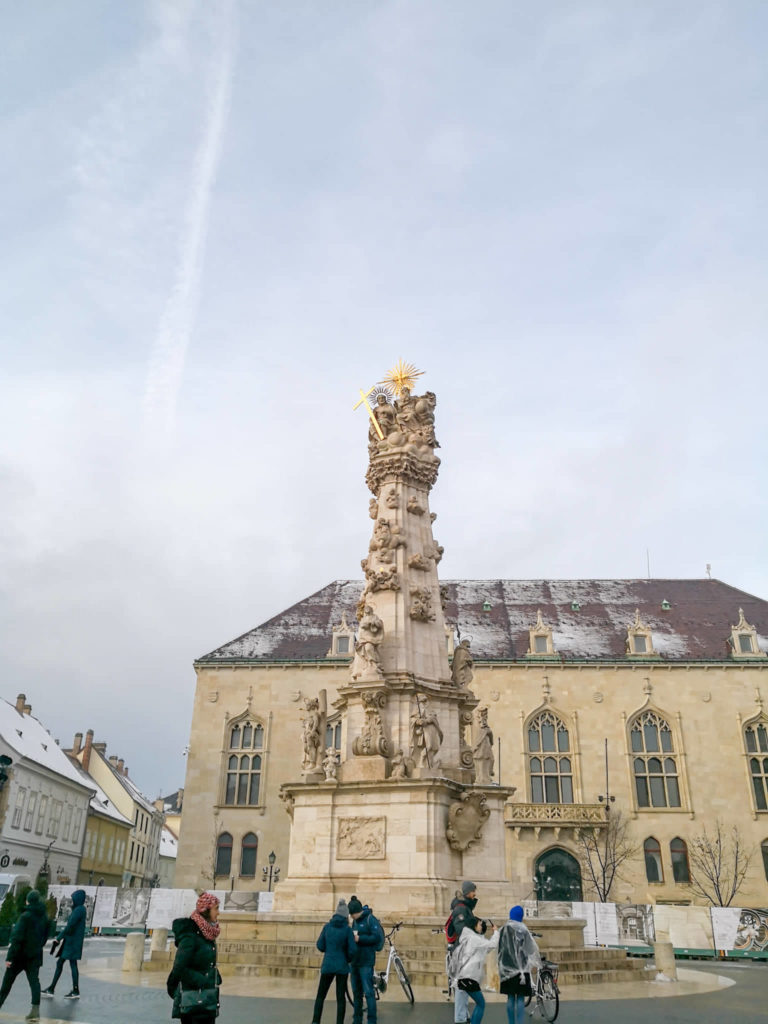 From this trip, these are my favourite photos from Budapest, how beautiful does it look with the snow? 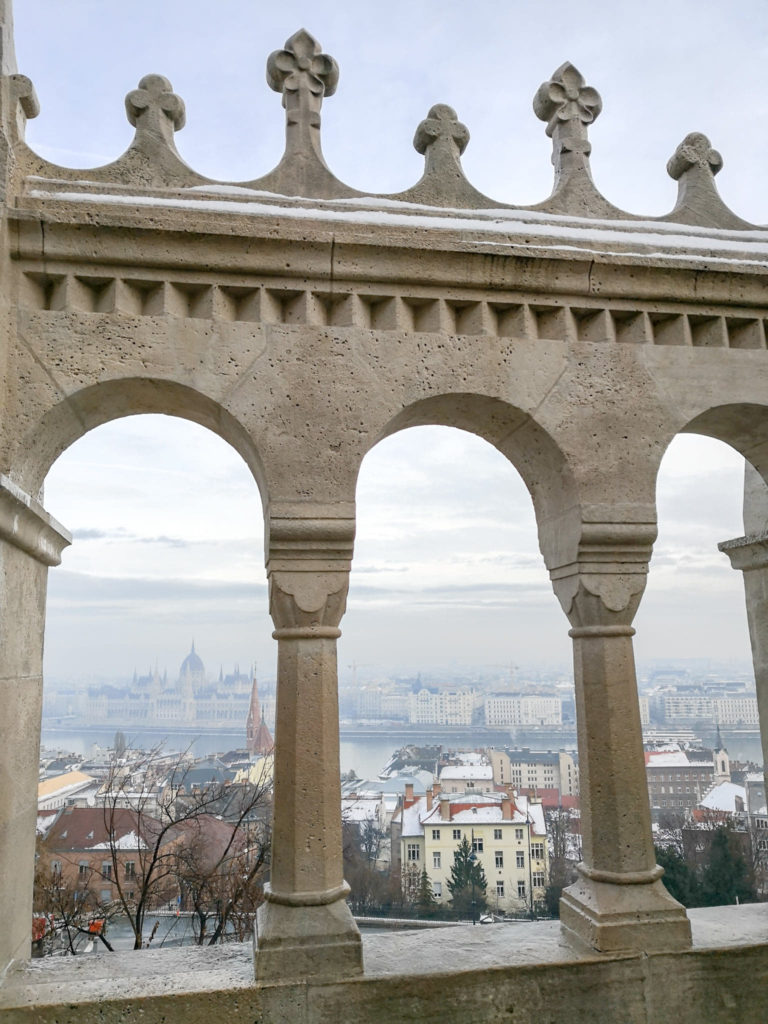 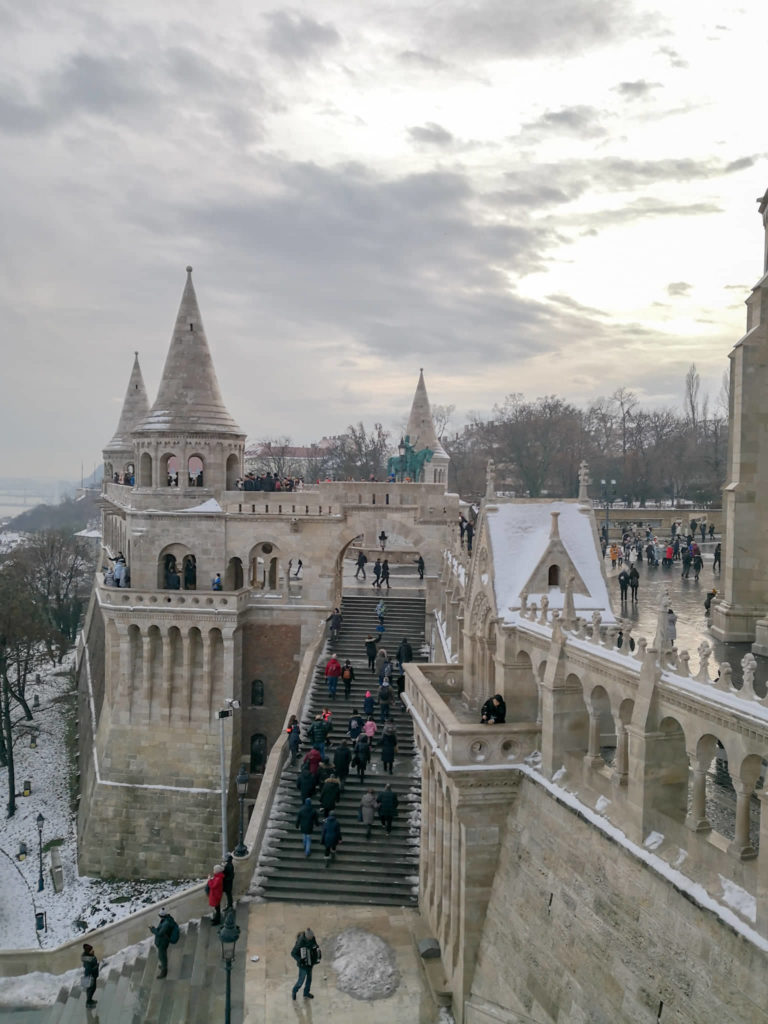 On my first visit to Budapest, I did the walking tour around the Jewish District. It was very insightful and I highly recommend it. Dohany Street Synagogue is the second largest Synagogue in the world and the largest Synagogue in Europe. It’s located in a Jewish neighbourhood of Budapest, also known for it’s tight-knit Jewish Orthodox Community. Built in 1859, it can seat 3000 people.

The garden of the Synagogue is also the burial place for over 2600 Jewish people who perished during the Holocaust. You’ll also notice ‘Emanuel Tree‘, a weeping willow tree where 30,000 names of victims of the Holocaust have been inscribed on its leaves. Upon closer inspection, you’ll see that the willow tree is also an upside down Menorah. Dohany Street Synagogue was also once the border of the Jewish Ghetto during WWII and the Nazi’s used the House of Worship as their watchtower and base. There’s also a Jewish Museum inside that I’ll visit next time.

Where to eat ・Knrdy Steakhouse

KNRDY American Steakhouse was recommended to us by the Hotel Concierge at The InterContinental after we both requested a good quality steak. I lower my expectations with hotel concierges because I often believe that they are more likely to send you to a tourist trap type restaurant they are somewhat affiliated with. Well, in this case, I was wrong. KNRDY was a fantastic recommendation and one I highly recommend too. It’s up there as one of the best steaks I’ve had in my life. 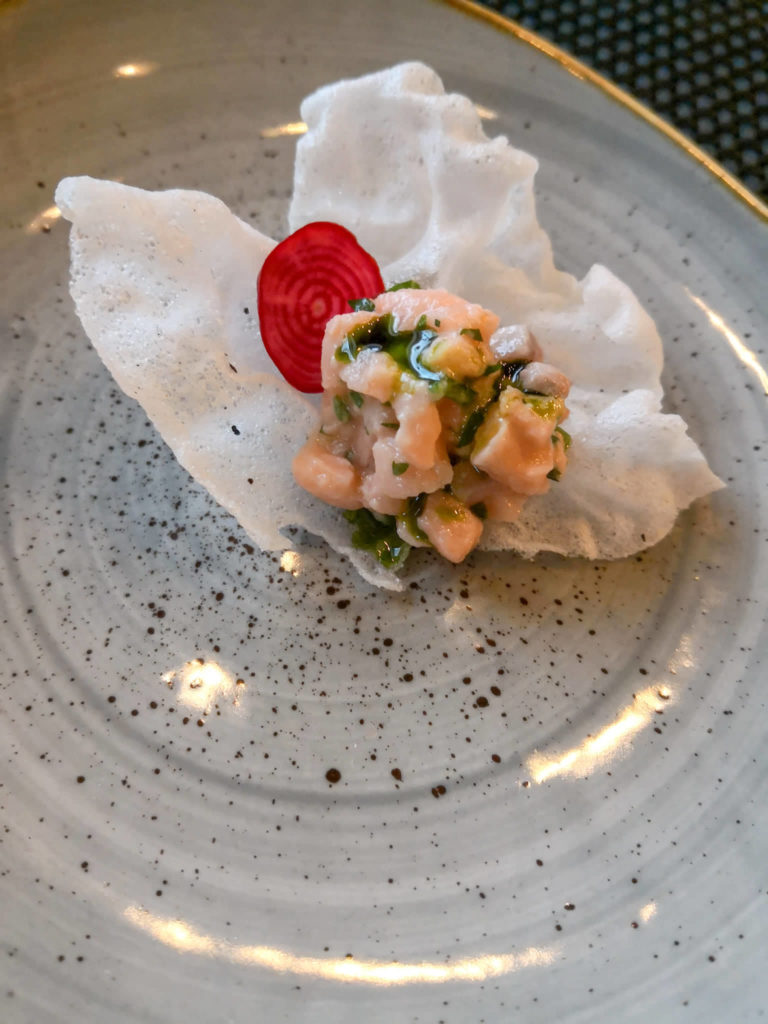 If you do end up dining at KNRDY, make sure you order the seared scallops with peas. This is one restaurant that does not get it wrong, like wow. Also, I ordered the filet mignon and asked for it to be cooked at medium, which as you can see below, it was done perfectly. Macaroni cheese also is a great side to add to your main. 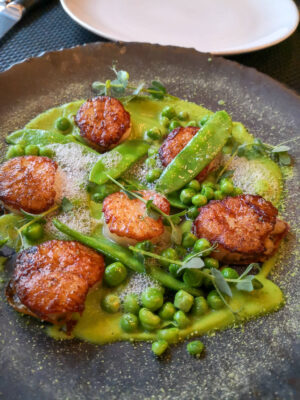 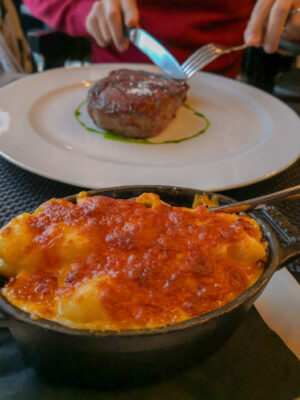 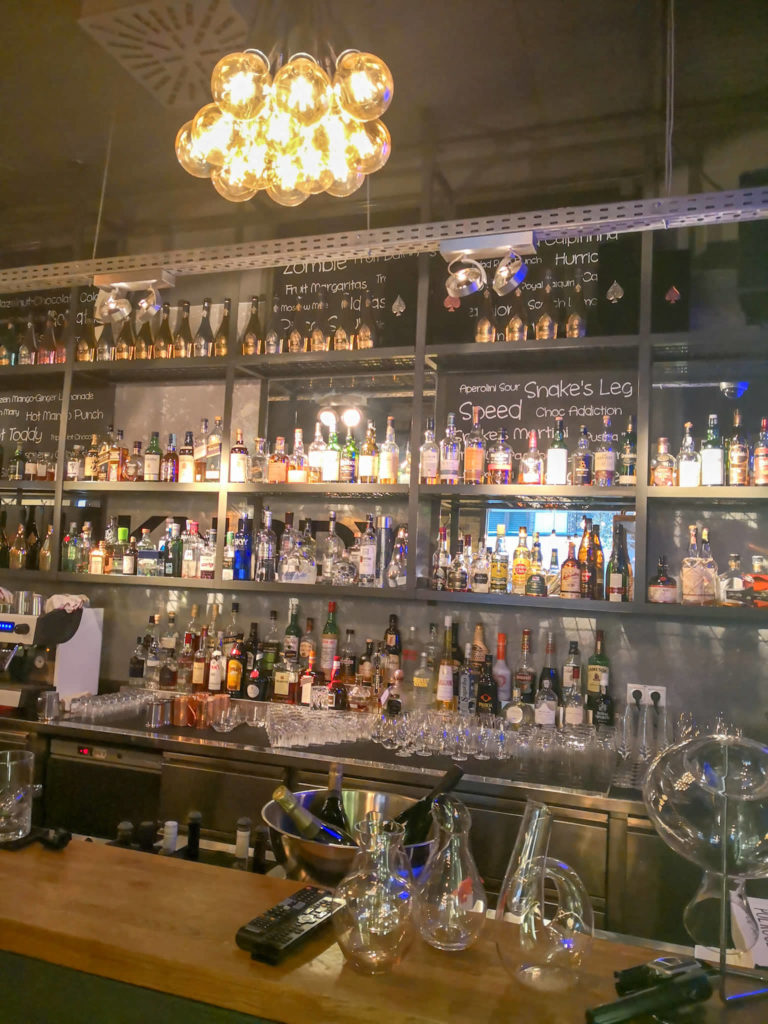 Where to eat ・Mazi Greek Kitchen

According to TripAdvisor, Mazi Greek Kitchen is the best Greek restaurant in Budapest. Why the hell are we even looking for Greek food in Hungary? No idea. You can take us out of the Mediterranean but we will take the Mediterranean with us. To be honest, my husband had a craving for halloumi cheese which is where it all began and suggested we visit Mazi for lunch. It’s still fairly central and located in the district behind the Parliament. 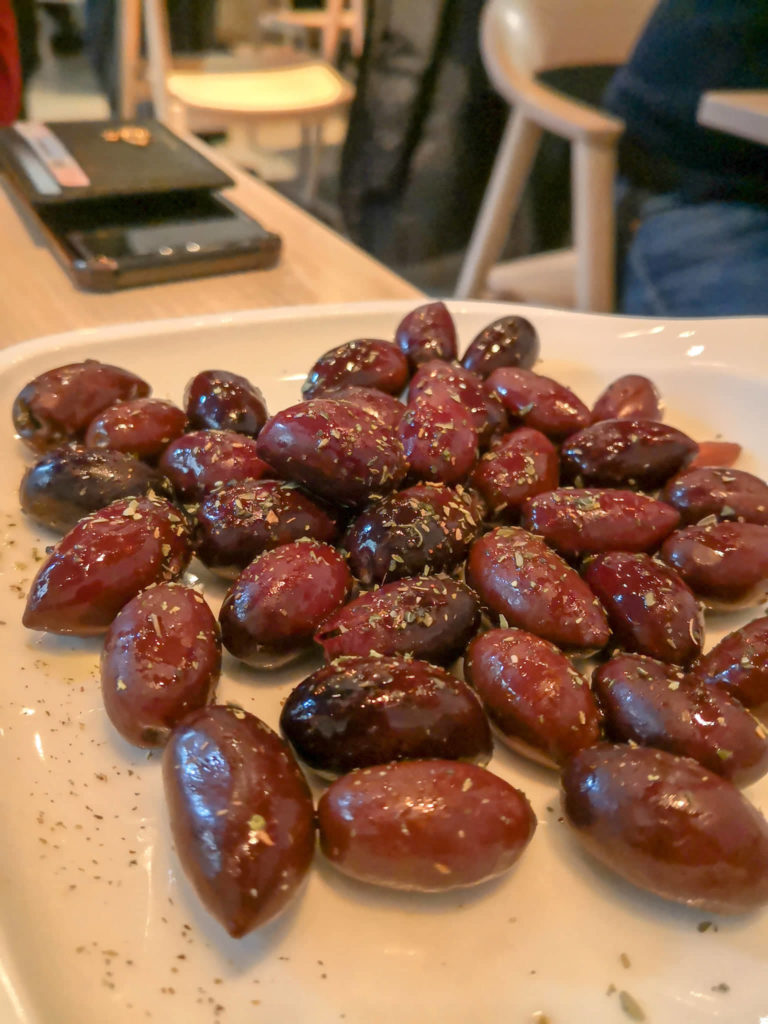 Mazi was busy when we walked in but there was a table for 2 available so we were a bit lucky. There was no halloumi cheese but we ended up ordering the grilled goat’s cheese instead which ended up being a great substitute. Kalamata olives are always a must when in a Greek restaurant and I wanted to try the octopus leg. 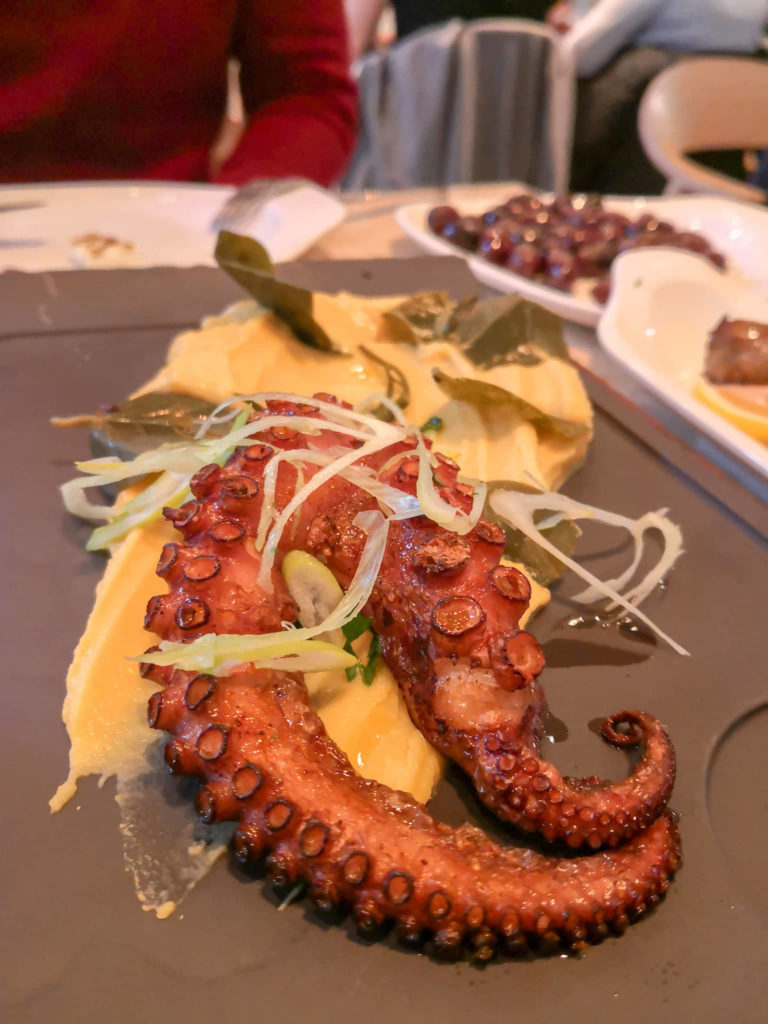 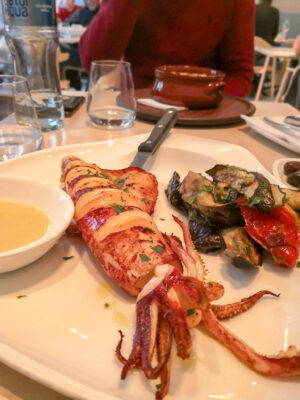 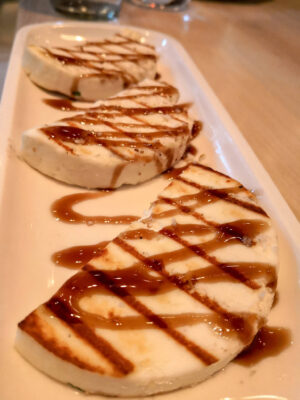 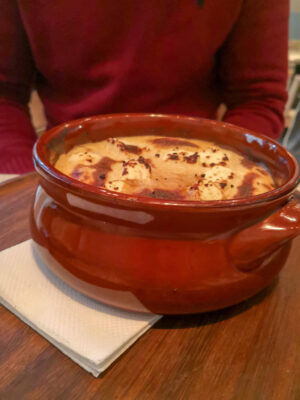 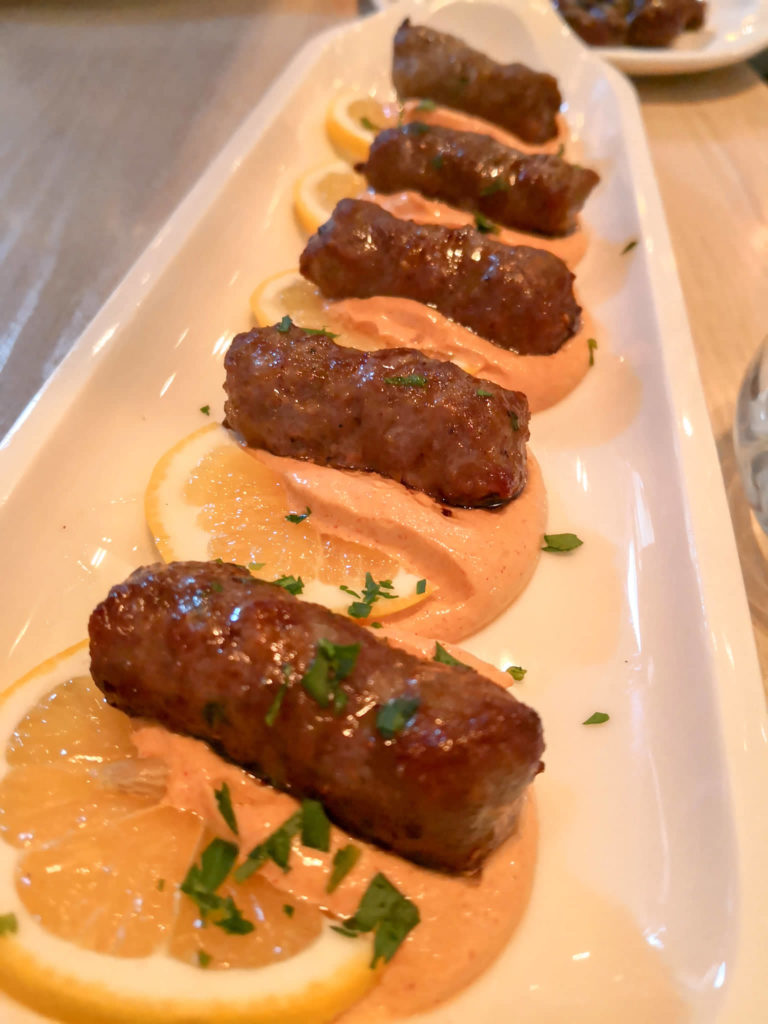 For mains, we had eggplant souvlaki and grilled calamari which came out as a full grilled squid with grilled seasonal vegetables and dressing. I loved it and if you’re in the mood for Greek in Budapest, visit Mazi.

WHERE I STAYED ・ INTERCONTINENTAL BUDAPEST

Last time I visited Budapest, I stayed at the Art’ Otel on the Buda side, a hotel opposite the Budapest Parliament and I loved it. I had a very spacious suite and I stared out at the Danube River all night drinking my local red wine. This time I knew I wanted to be based on the Pest side as it was closer to the Christmas Markets and Andrassy Avenue, meaning that we wouldn’t have to cross the Chain Bridge every single day to get to our hotel. 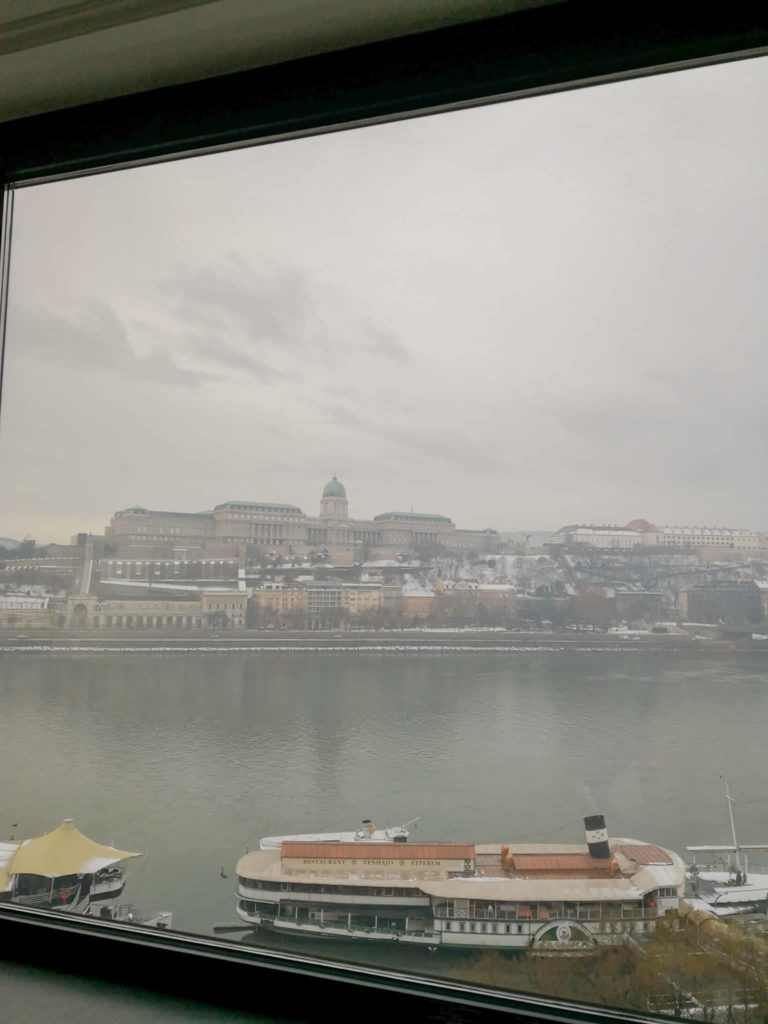 Budapest has so many luxury 5 star hotels to choose from, it really depends on the type of 5 star hotel you like. What I mean by this is, you’ve got your old money type hotels such as Kempinski Hotel Corvinus, Corinthia and The Ritz Carlton that are grand and historical. Then you have hotels such as InterContinental, Sofitel, Four Seasons, The Hilton and The Marriott that can all be found in all international cities and pretty much uniform in style. Or smaller boutique style hotels or luxury apartments. Budapest kind of has it all, depending on your budget and expectation. It’s as expensive or as cheap as you want it to be.

Can you see Budapest on a budget?

Yes, certainly. But it can also be quite expensive too, depending on your lifestyle.

The InterContinental was great for us as we wanted to be based centrally and be able to walk everywhere, particularly across The Chain Bridge. We upgraded our room for an extra 30€ per night and had front row seats to the Buda Castle, a view my husband still declares the best he’s ever experienced. I’ll ask him the same question in 12 months time.

Next time we’re in Budapest we will definitely visit one of the Turkish Baths and most likely stay at one of the more old money type hotels, just for the experience.

・Just like in most European cities, taxi’s can be one hell of an (expensive) experience. The local currency in Hungary is the Forint, not the Euro. Hungary has one of those currencies that literally go into the 10s to 100,000s which can get rather confusing very quickly when you’re trying to convert back to your native currency. Local opportunists are aware of this. Try and install a currency exchange app on your phone before you visit Hungary, preferably one that works offline so you’ll be able to track how much you’re spending or how much something many end up costing. A lot of the taxi’s that operate at taxi stands at bus/train stations are what locals refer to as “mafia taxi’s.” Try to avoid these as they will most likely rip you off as you are a tourist. The best way to get a taxi in Budapest is to call one up and they must have a logo stating they are “City Taxi” and a yellow registration plate, not a white one. White registration plate = Mafia Taxi. There is no Uber in Hungary as the Government is opposed to the company and always make sure the meter is reset when you get in the car. Seems like logic but you’d be surprised how often these things are forgotten. ALL taxi’s in Hungary accept card payment so if you have a driver that is pushing you to pay cash, don’t get in his car.