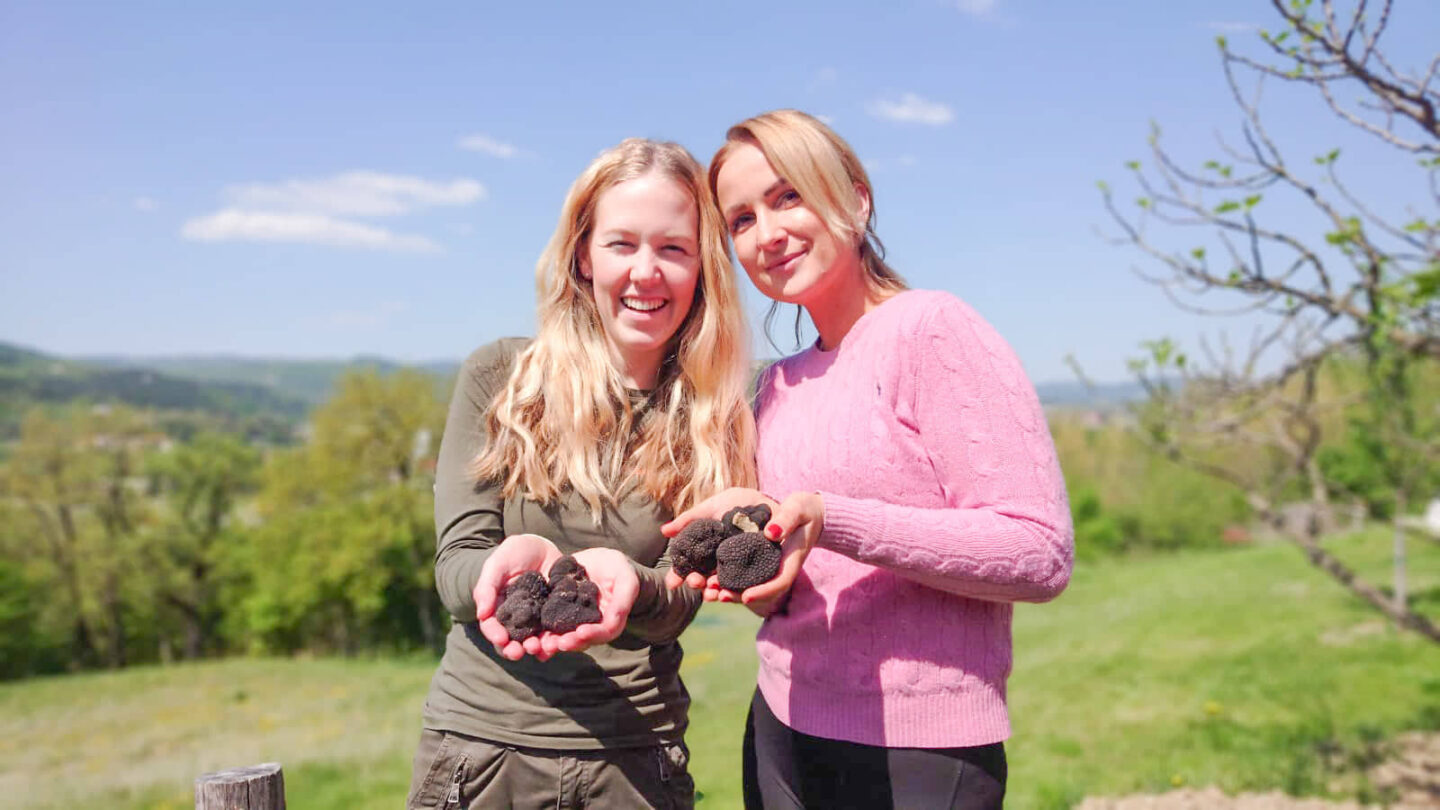 I finally did it!

I went truffle hunting in Istria! Truffle hunting has been on my bucket list of things to do in Croatia for the last three years and after meeting Visnja Prodan two years ago at the Pasta festival in Zminj, my wish was her command. The Prodan family are a third-generation truffle hunting family and have opened up their Buzet premises in Istria for guests to come along to go truffle hunting in the forest and indulge in the delicacies afterwards.

We decided to get away from Zagreb over the Easter long weekend with my cousins and there was no better weekend. The sun and blue skies had aligned, the day could not have been more perfect. My three year long dream came true at Prodan Tartufi in Buzet, Croatia, the Istria region of Croatia and by far, my favourite part of the whole country!

One of the perfect ways to experience Istria with locals is by truffle hunting through a forest. Although you can find truffles in many parts of Croatia (Slavonia included, it’s just rare and most locals are unaware they have truffles in their land), the Istria region of Croatia is renowned as the truffle capital of Croatia, mostly due to the land and weather conditions (and as I discovered, the cycle of life) creating the perfect synergy for the production of this underground gem!

Given Prodan Tartufi’s semi-secluded location among the hills and valleys of continental Istria, you are surrounded by serene nature. One of the first things you’ll notice when you arrive at Prodan Tartufi is the town of Buzet, nestled on top of a large hill in the distance adding to the picturesque unspoiled nature. 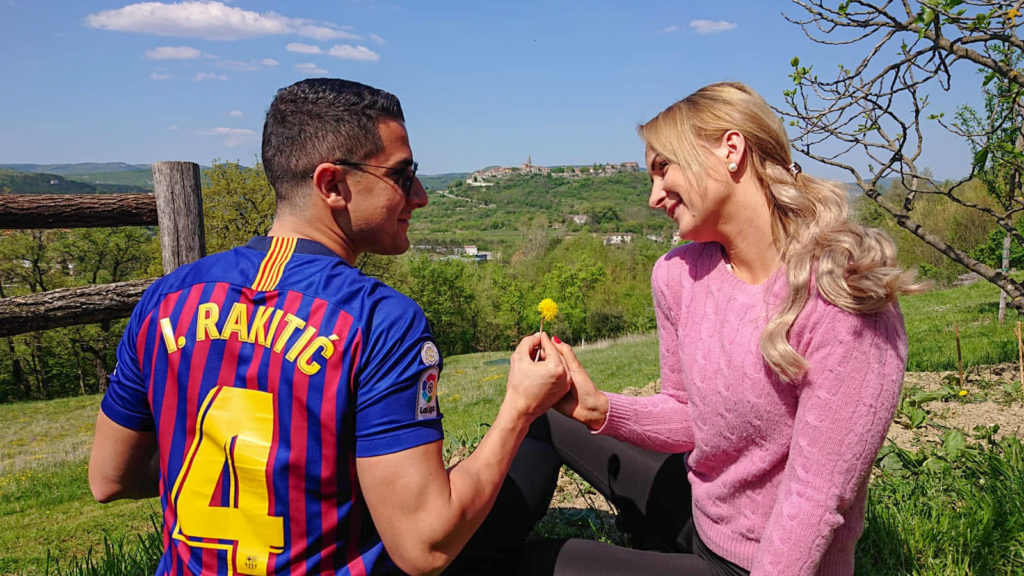 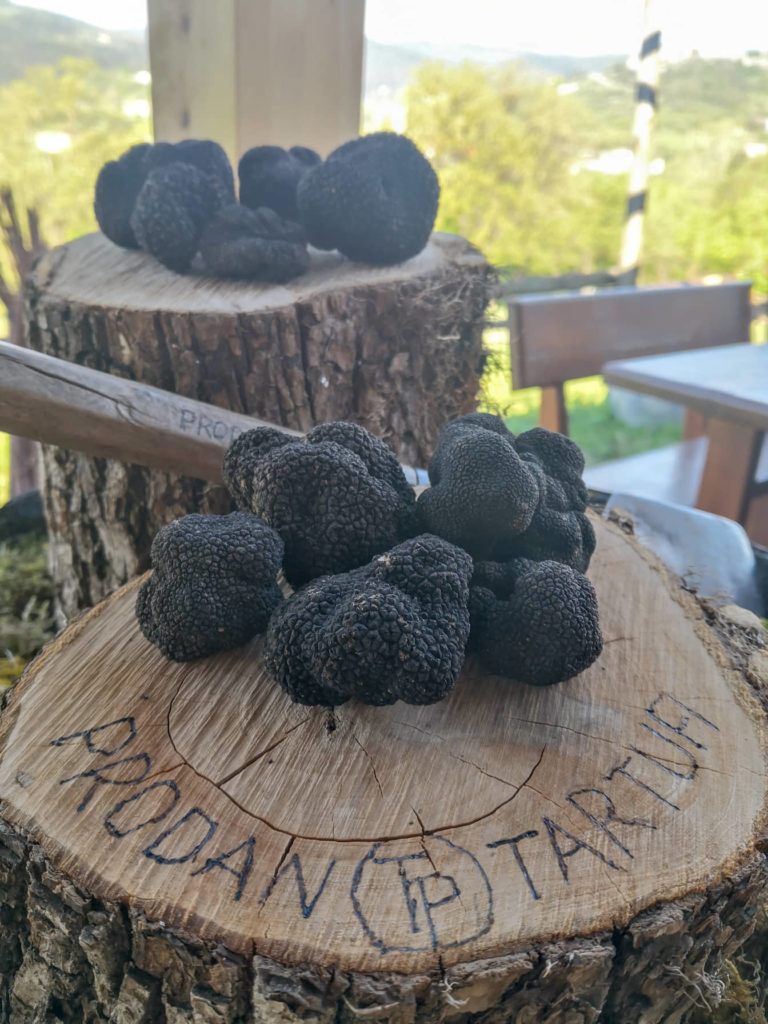 Considering our visit to Prodan Tartufi was during April, we were more than likely going to come across the basic black truffle that is found throughout the year. However, there’s nothing “basic” about the white truffle that is highly sought after, fetching up to 2,000-5,000€ per kilo (wholesale) and commonly found during mid-September right through till the end of January. Istria is also the home to where the largest white truffle had ever been found and entered the Guinness Book of Records. At a record 1.3kg, this truffle treasure wasn’t sold. Larger ones have been discovered since by the Italians however, this one was the heaviest and first of its kind in the world.

The owner, Giancarlo Zigante, decided to host an extravagant dinner, inviting locals and media to enjoy his unexpected and historic find in the Motovun Forest. As you can imagine, this also put Istria on the map as one of the leaders of truffles in the world! 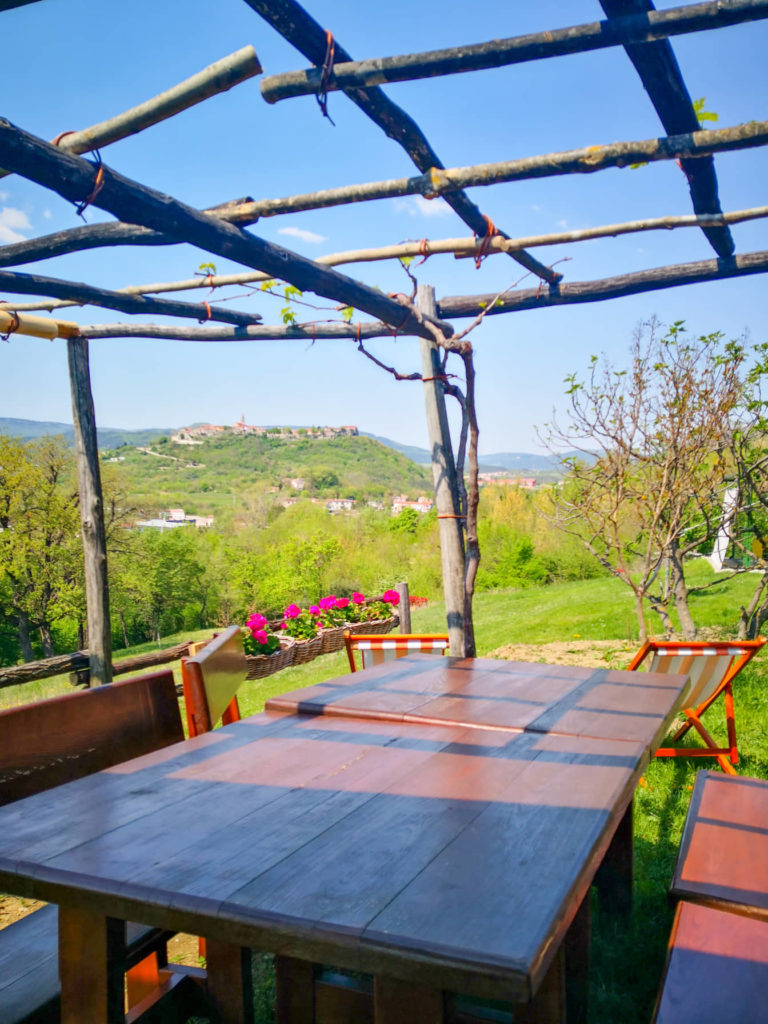 Visnja has trained four dogs who are basically an extension of the Prodan family, Brum, Stiv, Mel and Pico, all equally as adorable as one another to search for the treasures of nature, truffles. 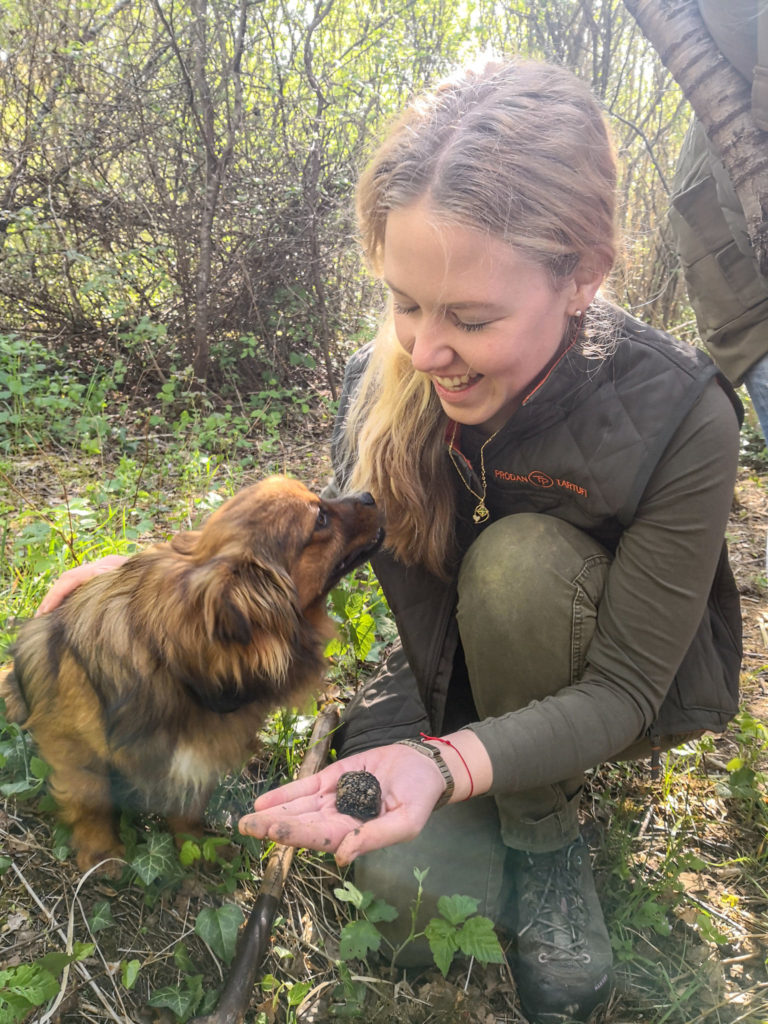 During our truffle hunt, we took two dogs with us as it is far easier to manage than all four and came across three black truffles!

The truffle hunting tour through the forest took about 45 minutes. I would say that it is child friendly as long as your child is comfortable walking through a forest, often uphill and downhill. If you’re injured then I wouldn’t recommend this tour, you should probably wait back at the house for brunch.

Due to your immediate excitement, you’ll forget what time it is and most likely give the green light for a glass of wine. Not me of course, I kept to my elderflower juice made fresh by Visnja’s mother, Vanda. My husband and cousins, on the other hand, found themselves a little tipsy before noon and long before they realised it was before noon. Two local and traditional Istrian wines were also served, white was Malvazija and the red was Teran.

A platter then arrived with local truffle specialities that you can purchase as part of the Prodan truffle empire. From truffle olive oil, truffle salami, truffle jam, truffle spreads and my personal favourite, truffle cheese. You can imagine the silence at the table as we ate through our platters! 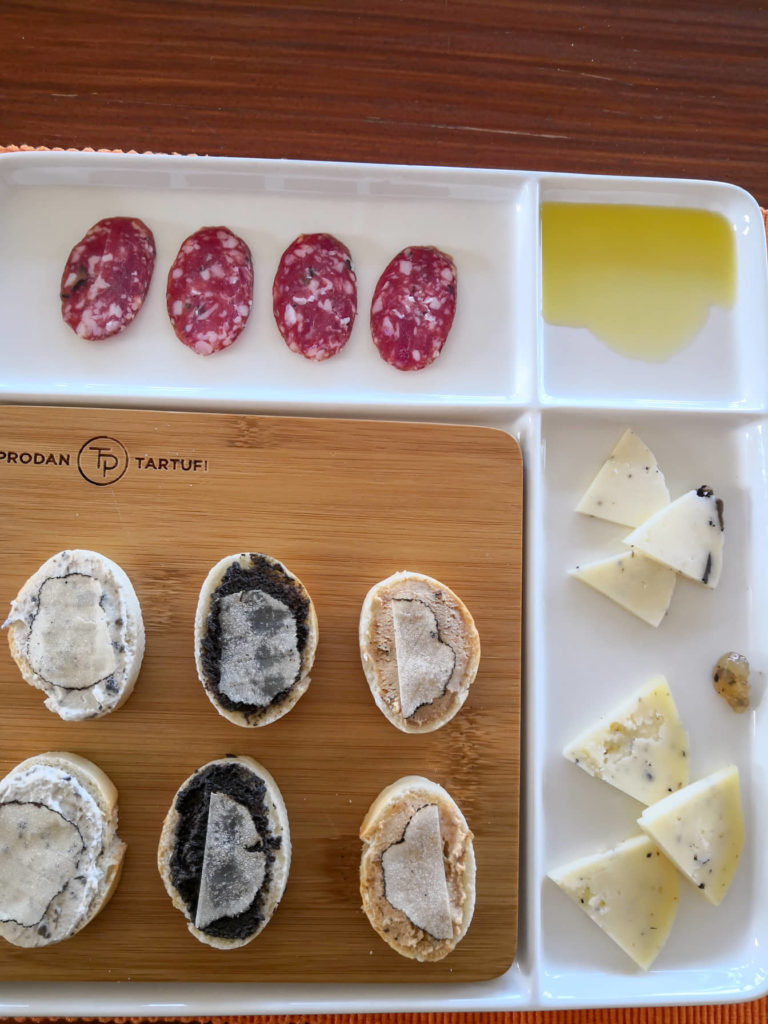 Prodan Tartufi recently received one of their greatest compliments as a truffle-hunting family. Last year, Anna Tyler from Lonely Planet visited Buzet for her very own truffle hunting experience with the Prodan family and made one very serious observation. “For the Prodans, no dish is complete without truffles, and they liberally sprinkle the flavourful shavings on all of their meals as if it were salt.“

I can officially confirm this.

Vanda Prodan introduced us to a whole new breakfast/brunch experience with life-changing scrambled eggs. Don’t think I throw the word “life-changing” around so easily, I am difficult to impress these days when it comes to food. After Vanda’s truffle scrambled eggs, breakfast will never be the same again! 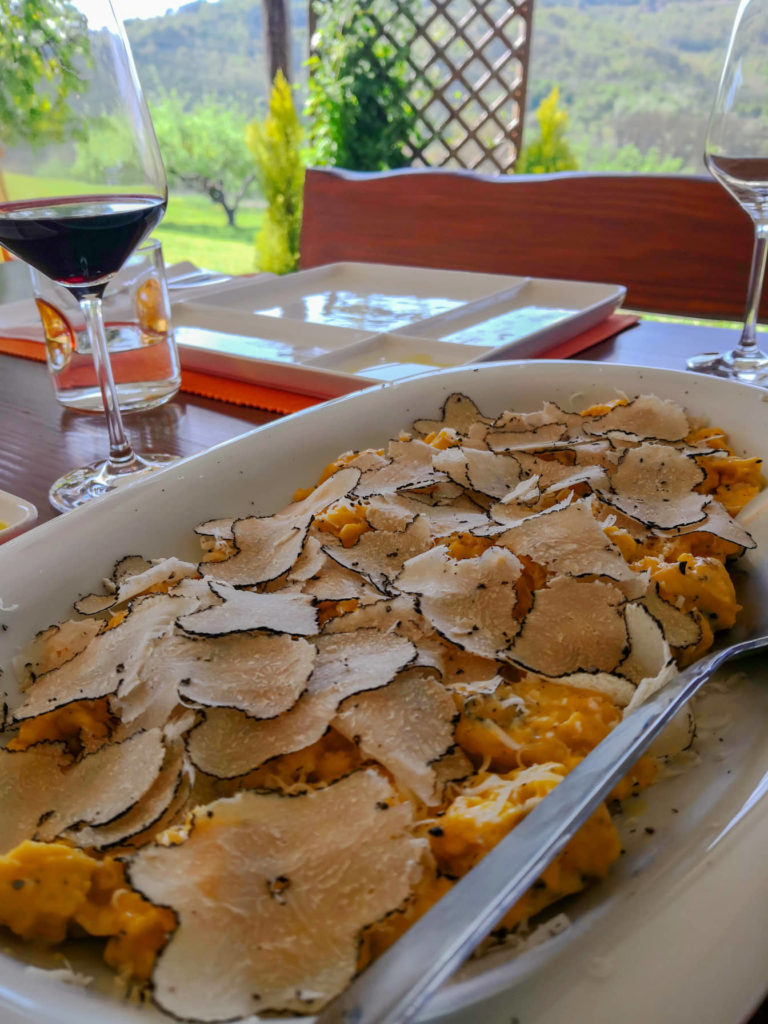 Once we finished our delicious brunch, we were offered dessert, truffle ice cream. This was vanilla bean ice cream with truffle honey from the Prodan product collection drizzled on top. Absolutely divine! 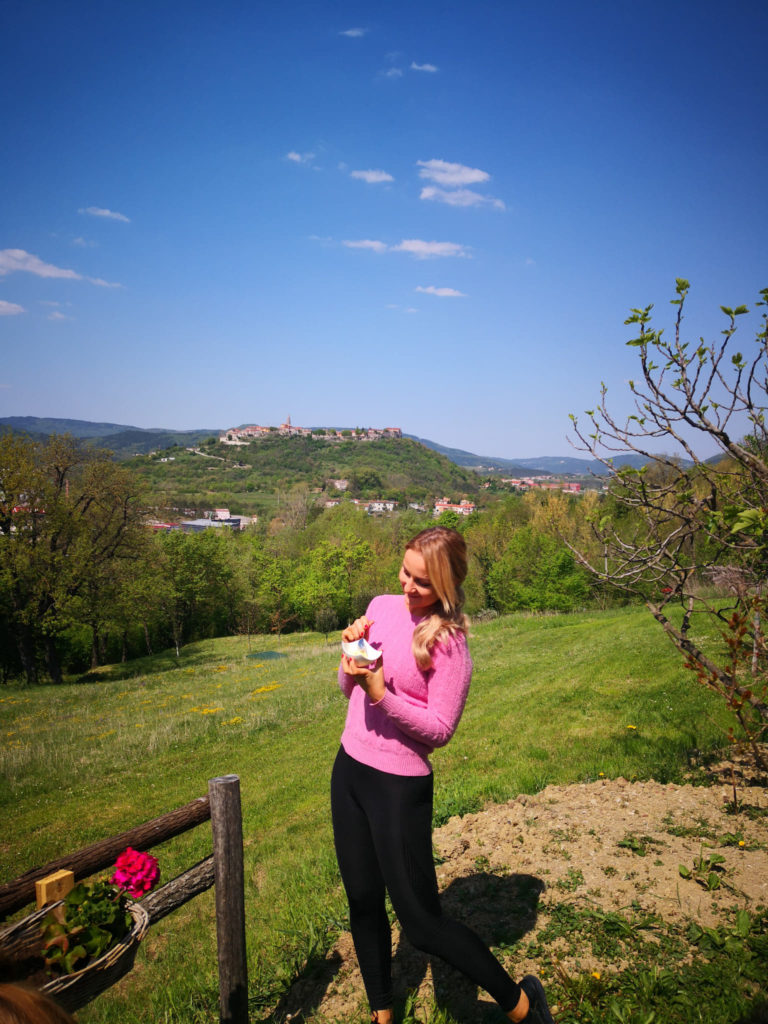 During my stay at Prodan, Tartufi was one of the rare occasions I forgot about the faster-paced city life, I felt connected to and wanted to stay out in nature. We continued what we called our “zen-mode“, soaking it all in from the terrace overlooking Buzet town. 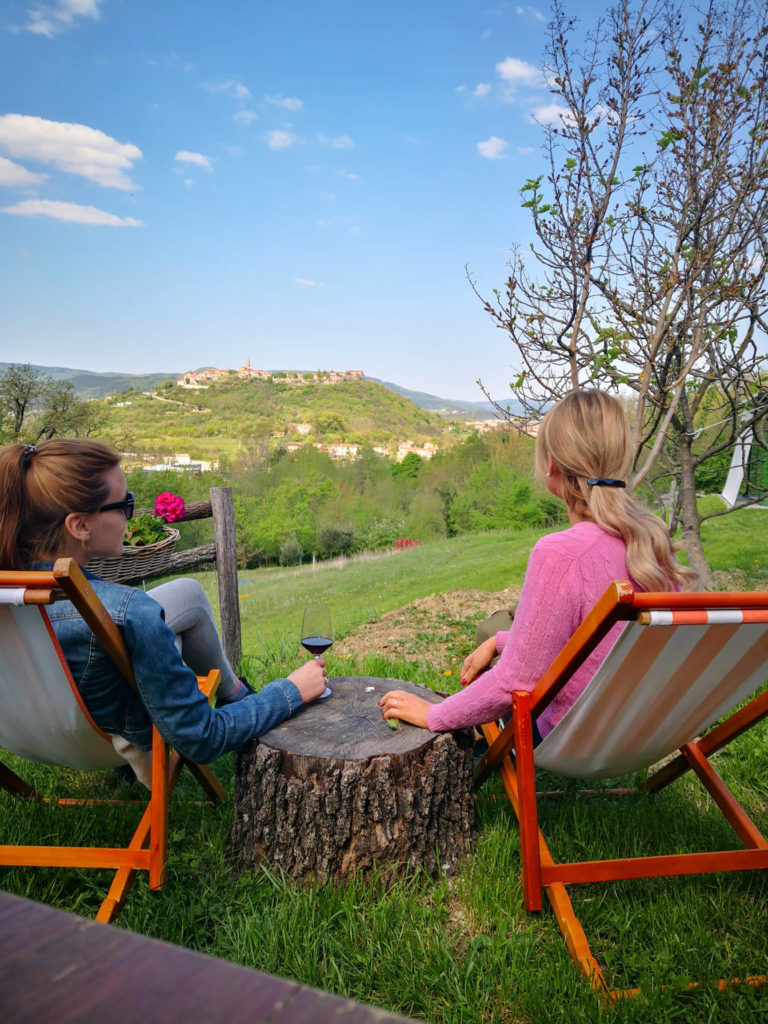 For those looking for an experience well away from the sounds of the city, a truffle hunting tour in Istria is perfect. The entire experience took around 3 hours and afterwards you’re given an opportunity to purchase truffle products that were sampled during brunch from the Prodan Tartufi store. It is also important to note that Prodan Tartufi has also expanded its product line with Halal products.

A special thank you to Visnja and her family for making my truffle dreams come true! It was a Saturday morning that I’ll never forget and will be hard to beat! I’ll definitely be back.