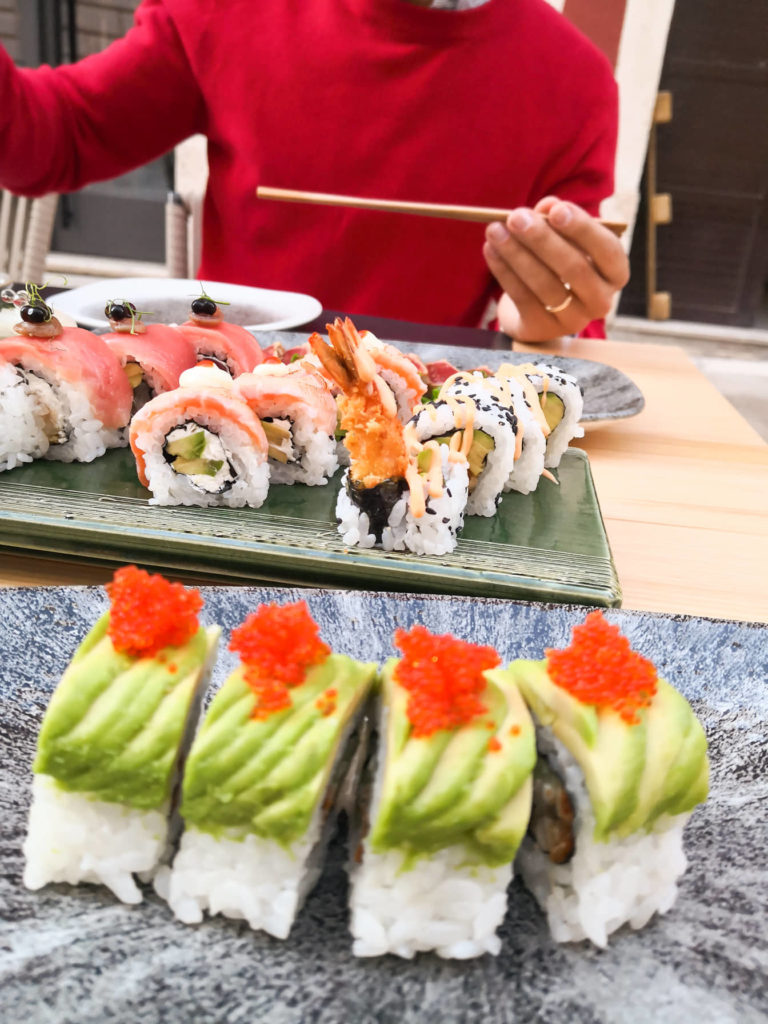 Compared to Split and Zagreb, Zadar’s gastro scene is still very underdeveloped leaving many unexplored opportunities. When I first moved to Zadar last May, I noticed that there weren’t any Japanese restaurants and sushi was nowhere to be found, except for a random pop up at Hotel Bastion mid-summer. When a couple of months back it was announced that Zadar’s first sushi restaurant, Maguro Restaurant & Sushi Bar would open in the Old Town, my prayers had been answered. I just hoped that it would be as good as my go-to restaurant for my sushi fix in Zagreb, Takenoko.

The word, “maguro” in Japanese means tuna which is very fitting as the tuna used in the restaurant is from local tuna farm, The Kali Tuna Company. Not only is the tuna considered top quality but also in high demand where 95% of their tuna is exported to Japan. To add some credibility to Kali Tuna last year, the most famous Japanese chef in the world, Nobuyuki Nobu Matsuhisa, restauranteur of world famous Nobu (my favourite Japanese restaurant in the world, I can’t wait to go back!) visited the Kali tuna farm on Island Ugljan in Zadar Region, declaring that he too wanted a piece of the Adriatic tuna pie!

My husband and I made a pact to slowly begin ticking restaurants and experiences in Croatia off our bucket list. We may as well take full advantage while we’re still based here. In Zadar, my husband tends to stick to a select few restaurants to go to but I’ve enforced a new rule where we must start to explore new places. I must admit, I was a little worried about having a really good experience at Maguro in Zadar as I knew it could easily turn into a whole new addiction. 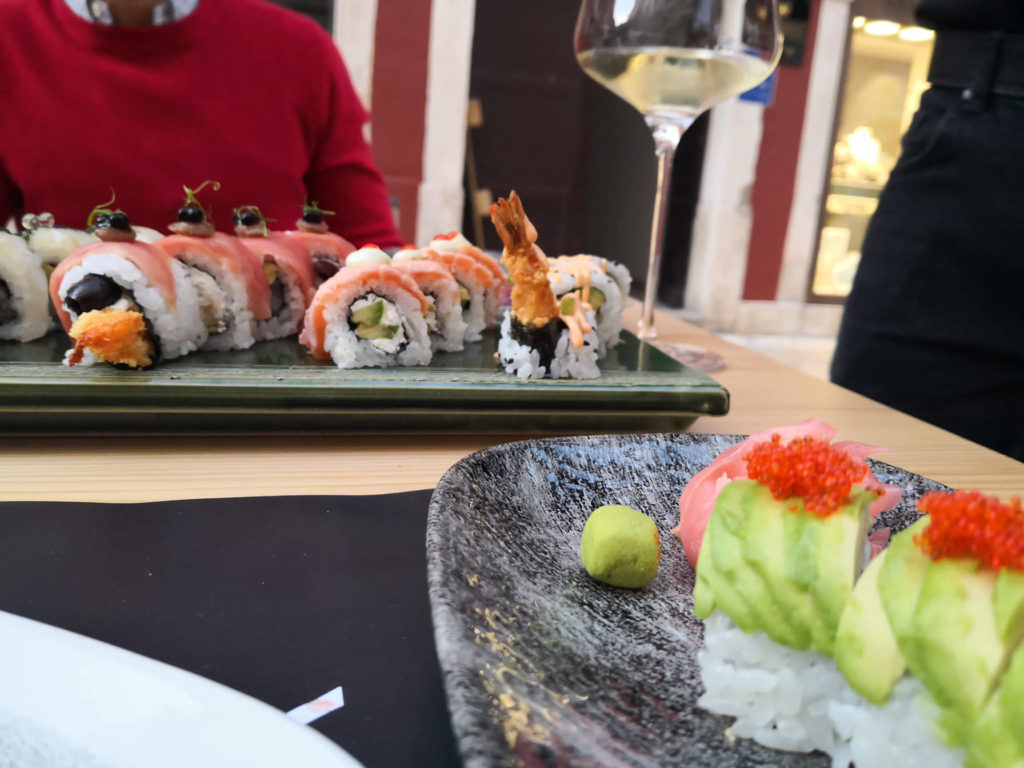 Located on the ground floor of a super-cute townhouse, opposite the Zadar court, you’ll find Maguro wedged between a candy store and jeweller. There’s also a terrace area with four tables (soon to be expanded), a great place to sit when the weather is nice and not so windy. If you choose to sit outside during your Maguro experience in Zadar, expect to have a lot of eyeballs from passersby.

The kitchen is run by sushi master Fabian Saravanja who is young but started training to be a sushi master in his teens. Quite impressive. Previous experience includes Time Restaurant in Zagreb and Kinoteka in Split.

We decided to stop by Maguro around 7 pm on a Friday night with no booking. Considering its still off-season in Zadar, we thought we’d try our luck. Inside the restaurant was completely full, but we were more than welcome to take a seat out on the terrace area which we happily did. Our waiter was a bubbly young man from Osijek who not only was a great conversationalist but recommended some of the winning dishes that you’ll see in this post.

The menu is a combination of Asian-fusion style dishes with plenty of sushi options. There is a diverse range of options from sushi to ceviche, gyoza to ramen and curry. However, if you’re looking for mains, beefsteak, tuna steak, teriyaki chicken and hoisin duck are also great options. 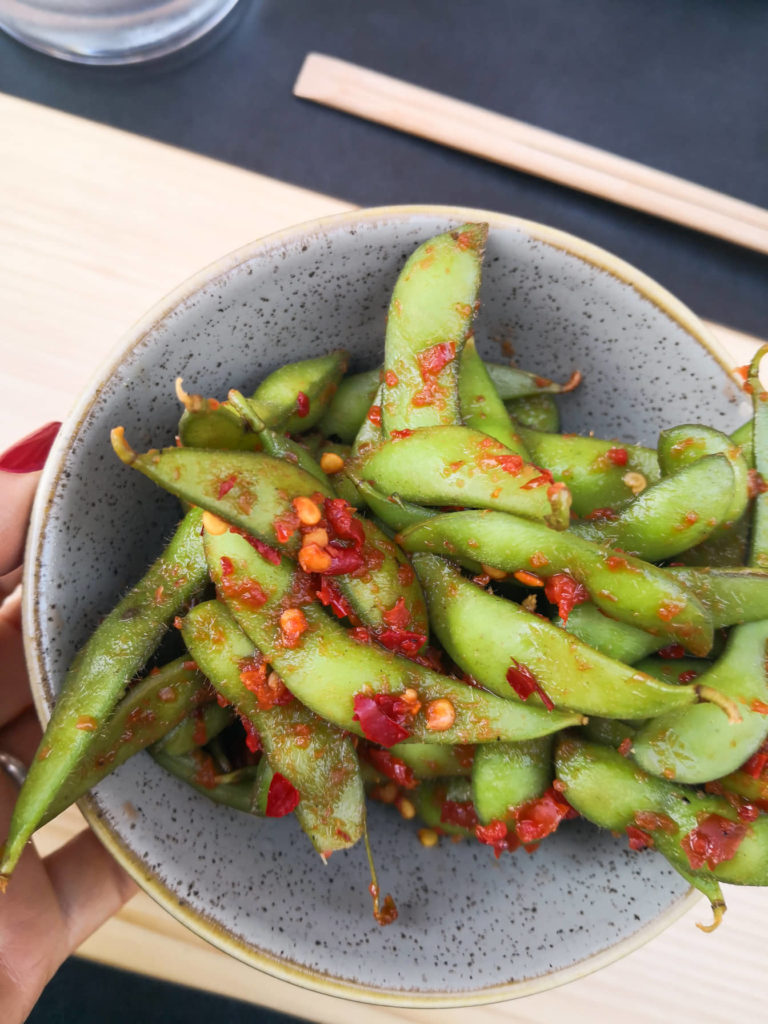 We started off light with spicey edamame that wasn’t as spicy as they look, in a good way. The chunky pieces of paprika were sweeter than expected but beware, it’s still spicy. 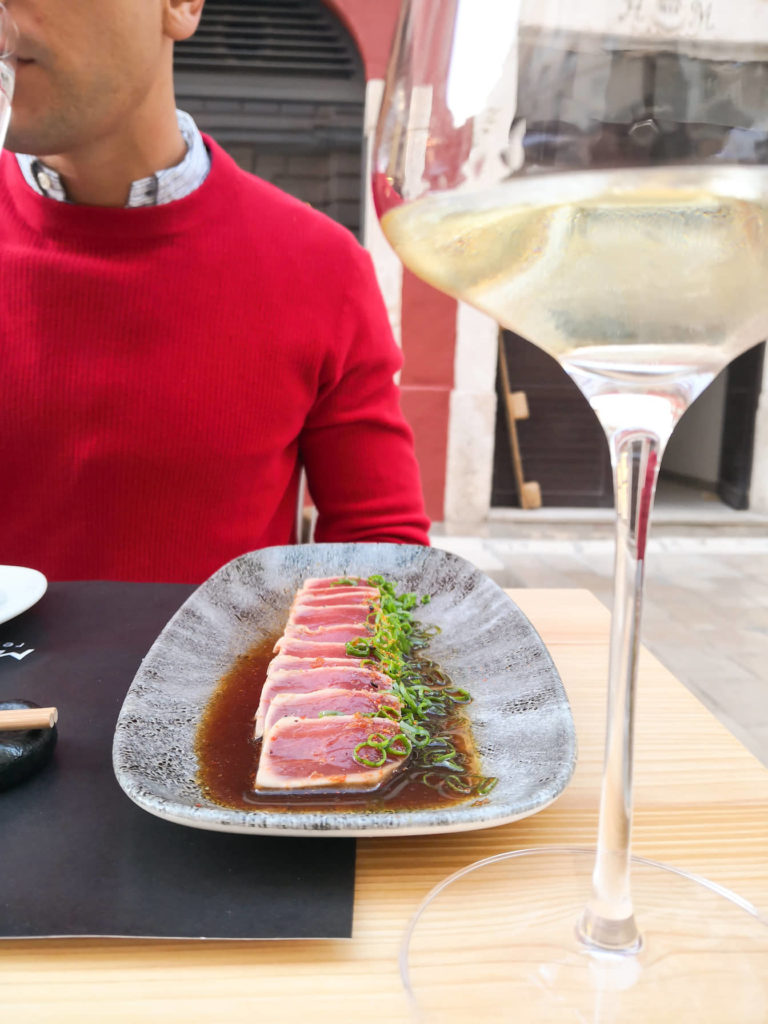 Followed by the tuna tataki, which was recommended by our waiter. My husband initially wanted the ceviche and carpaccio but they were out of white fish. Never mind, I wasn’t too keen on his desires so I was more than happy with the tuna tataki. This is one of the winning dishes at Maguro, the tuna perfectly seared and being so fresh it literally melts in your mouth. 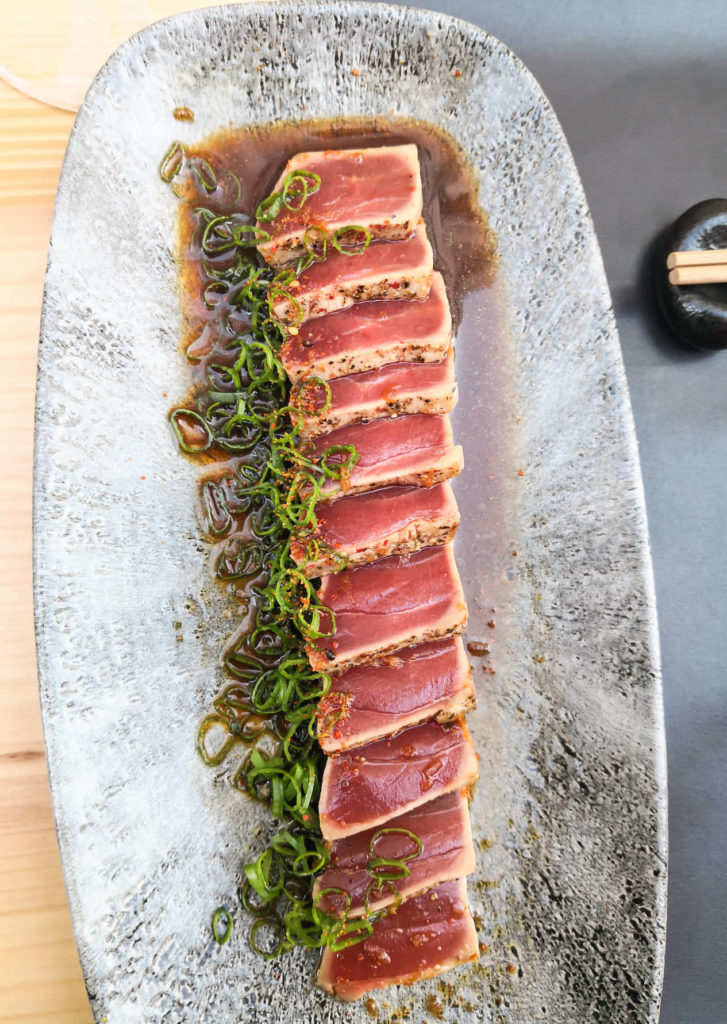 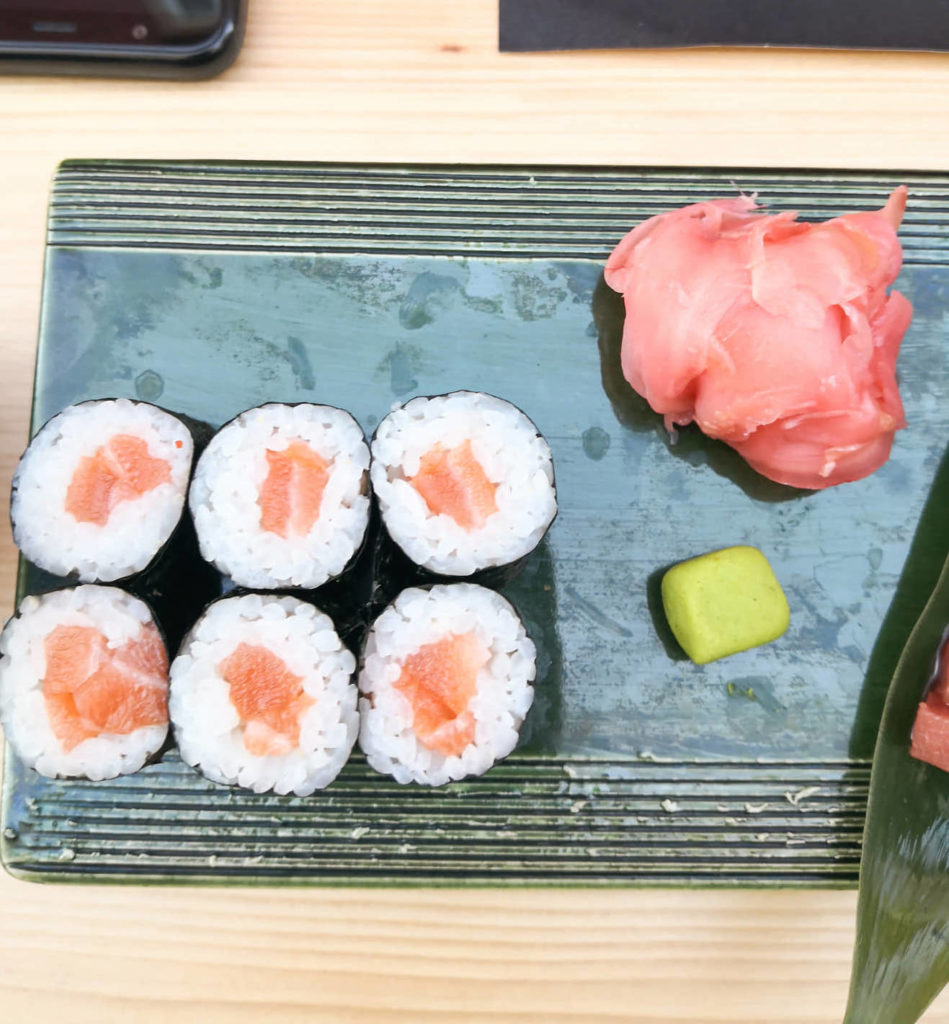 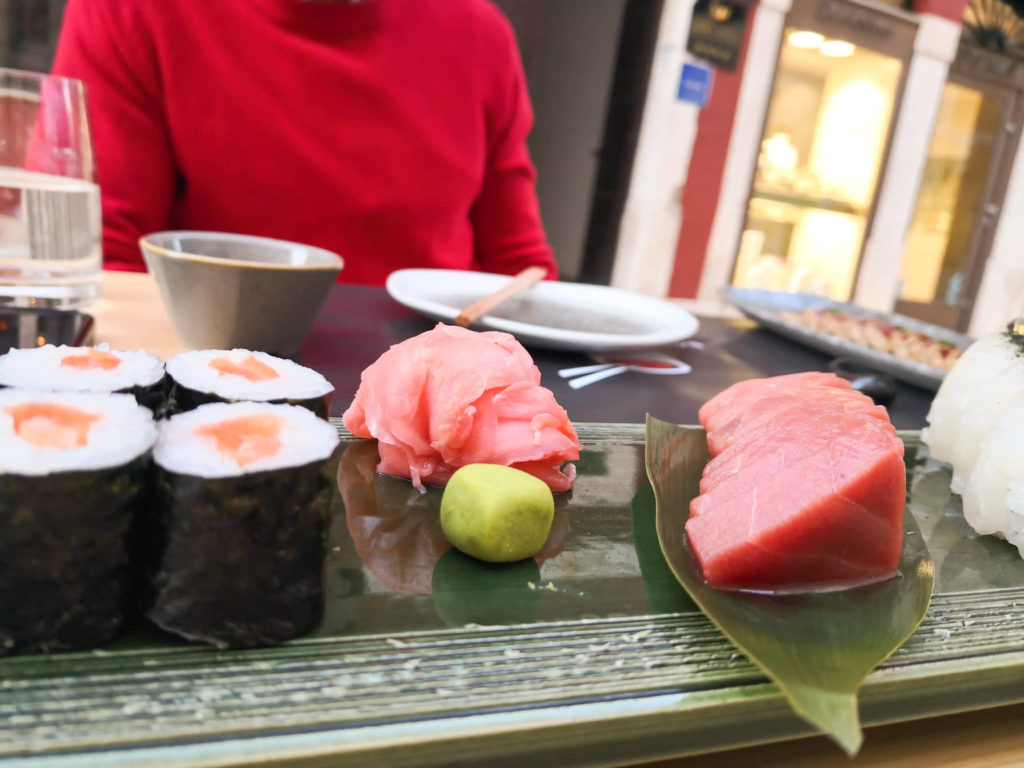 I ordered 6 salmon hosomaki rolls for myself as I was a little hesitant to how “creative” Maguro’s sushi would be.

My husband and I HAD to try the tuna sashimi. I mean, it is, after all, the most sought after tuna in the world and if the Japanese have given it the thumbs up, it must be good, right? Right. The tuna sashimi was absolutely mouth watering, we had to scissors-paper-rock on who would have the last piece. 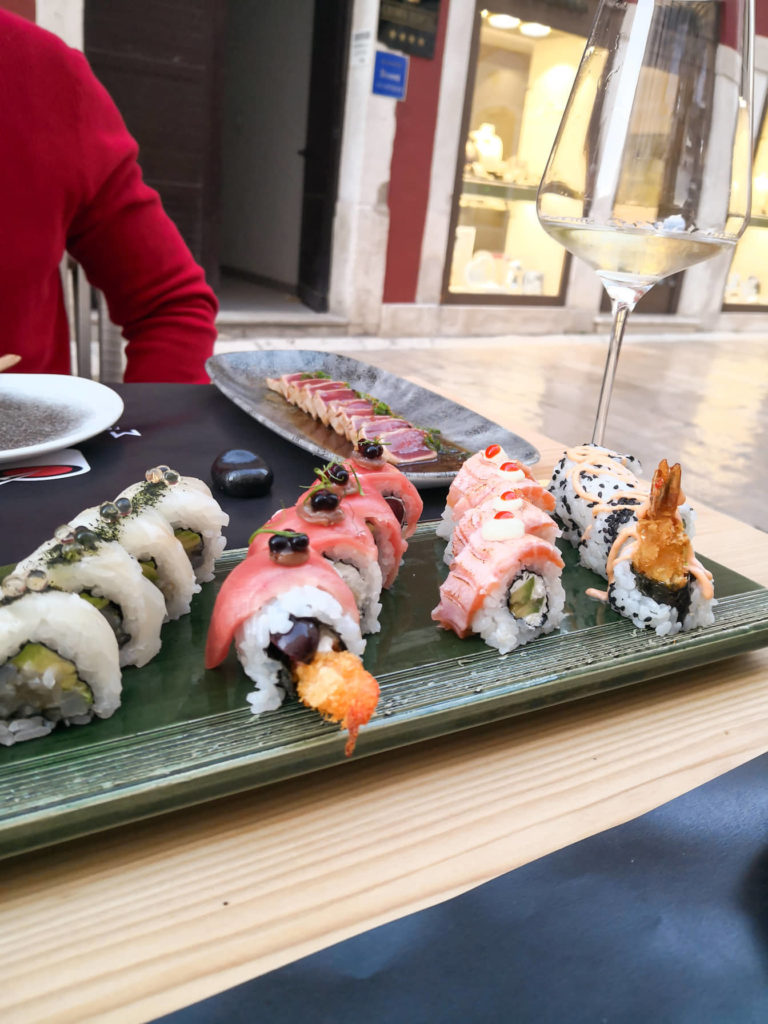 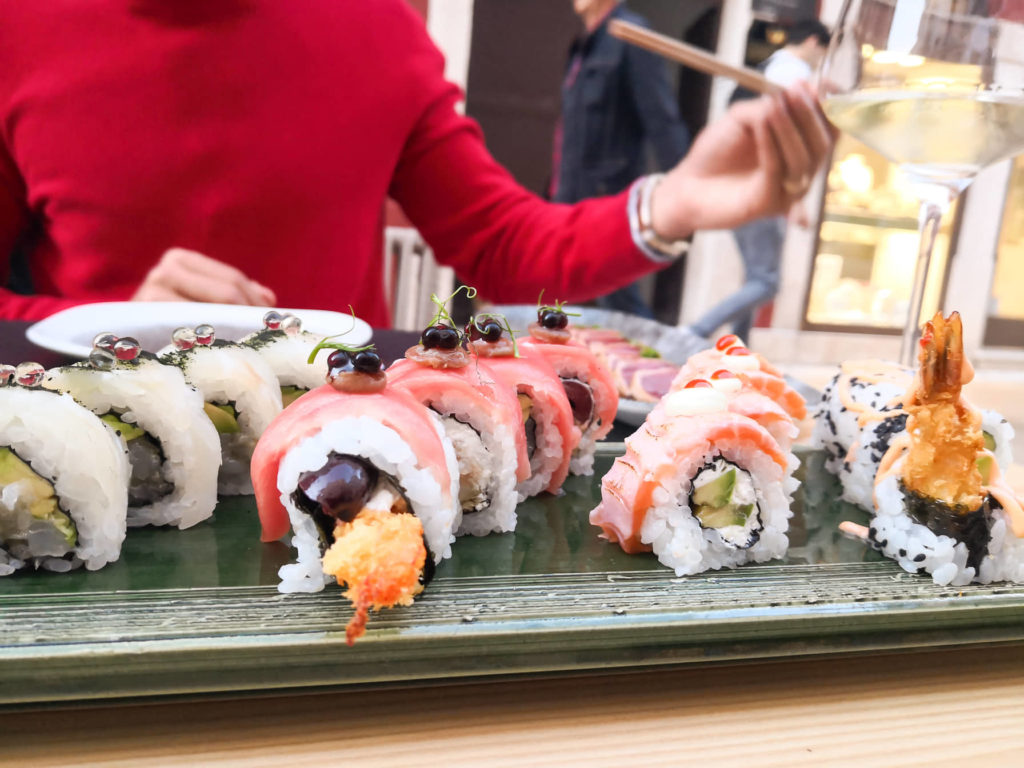 We ordered five varieties of sushi. The dragon roll, mediteran, california, Maguro roll, and age ebi. When I say I don’t like “creative” sushi, I mean I don’t like any mayo drizzled on or inside the sushi rolls. That’s why I like to keep things basic. However, I couldn’t get enough of the maguro roll with crispy shrimp inside, it even had a kalamata olive inside- adding a dalmatian touch to the sushi roll. All the ingredients of each sushi roll were fresh and melted in your mouth. The sushi rolls at Maguro are fantastic! 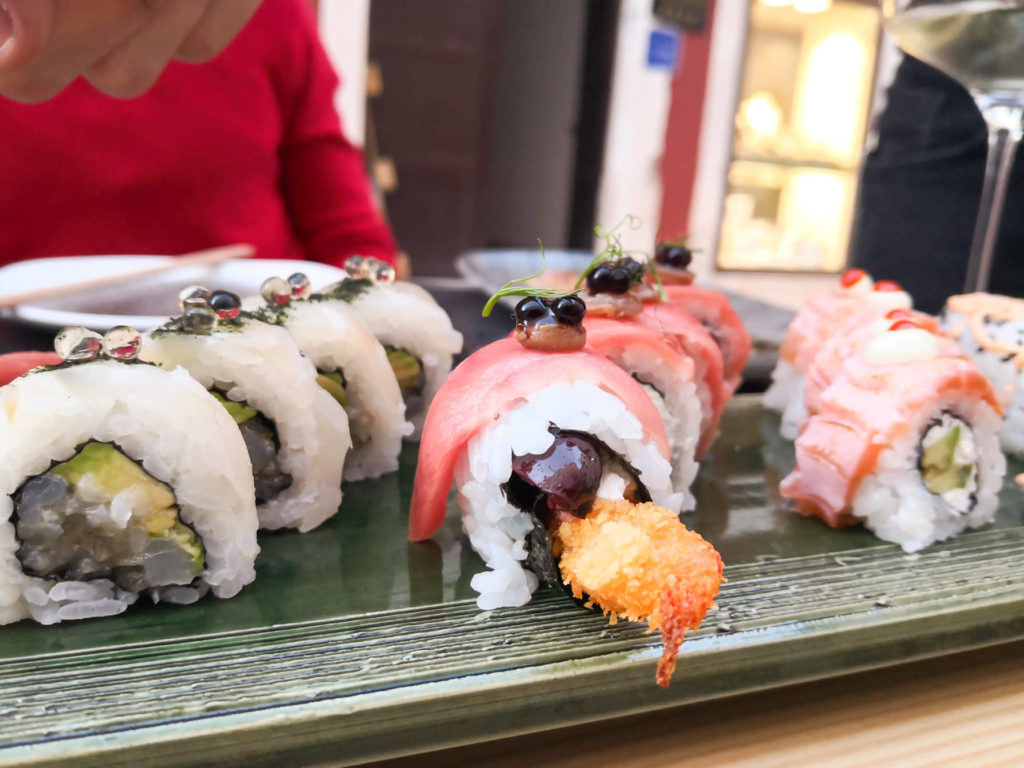 Here’s where things begin to elevate on a whole new level. I hear my husband say, “I’m going to say it, this sushi is better than Takenoko…”  I take a deep breath and say, “I think you may be right.“ 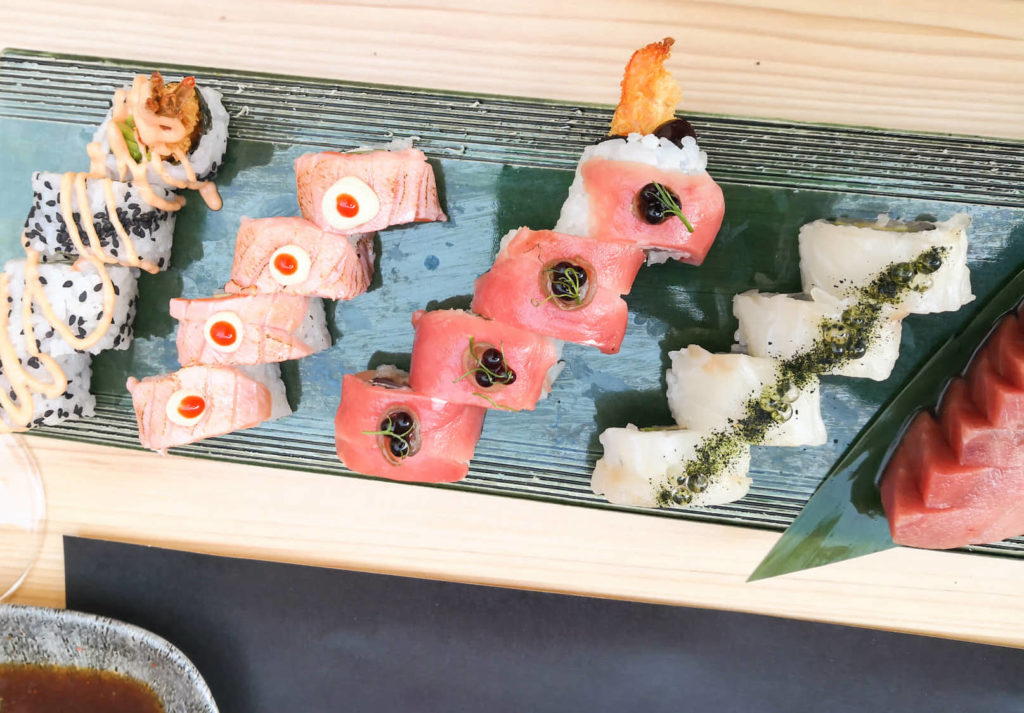 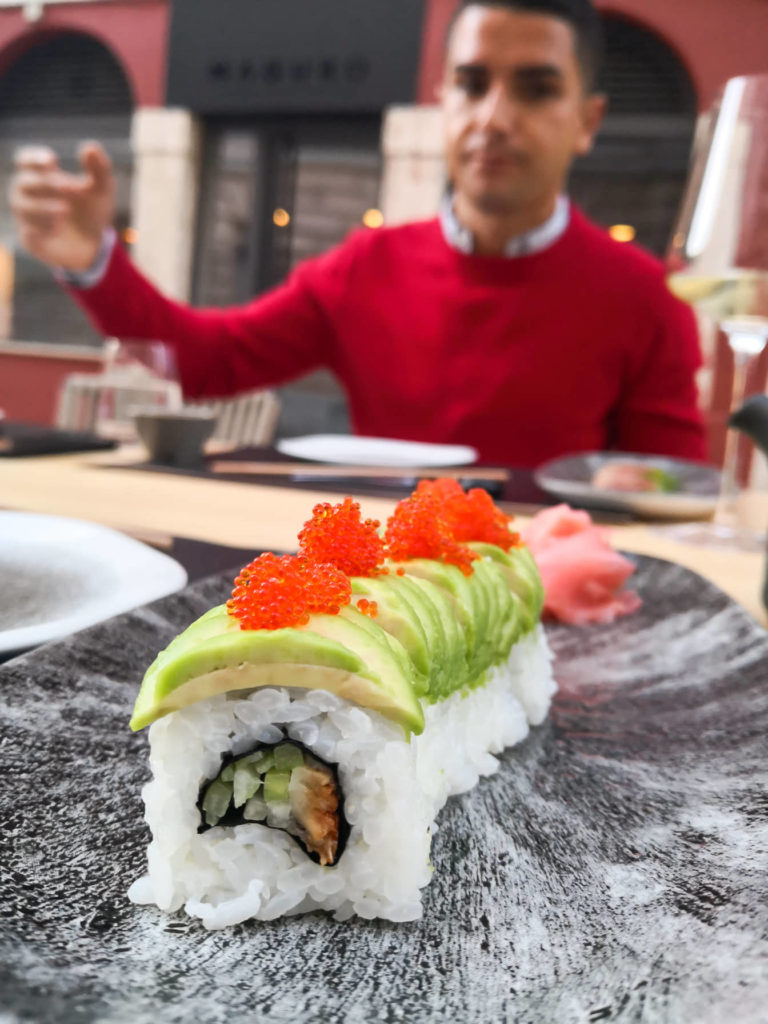 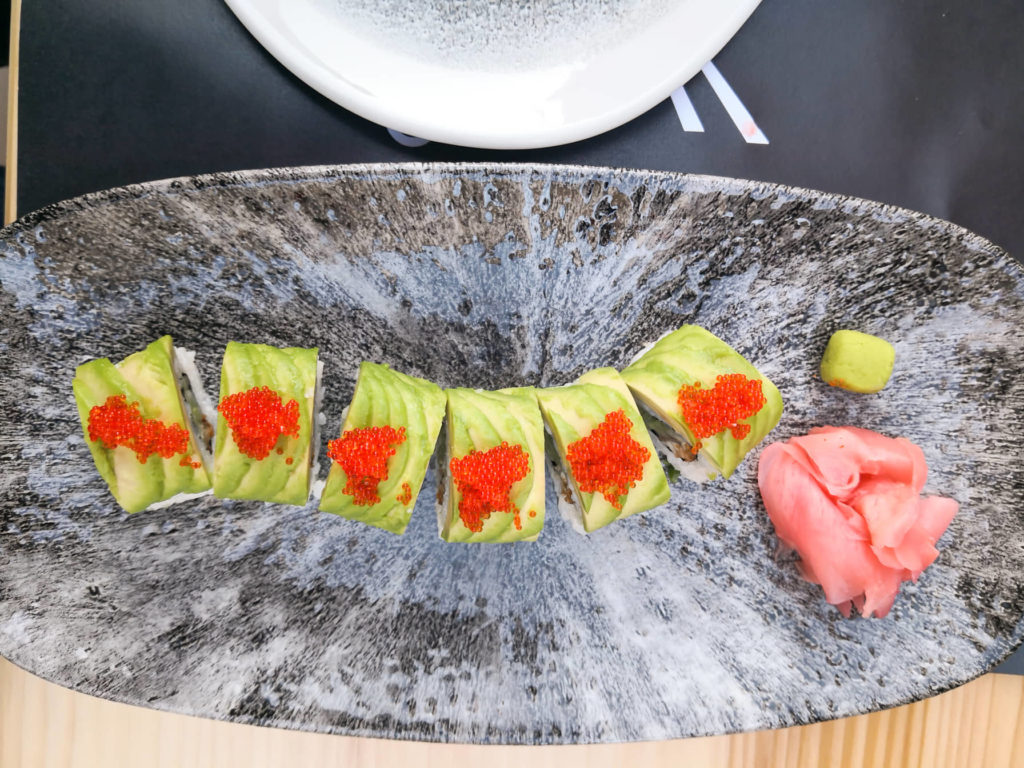 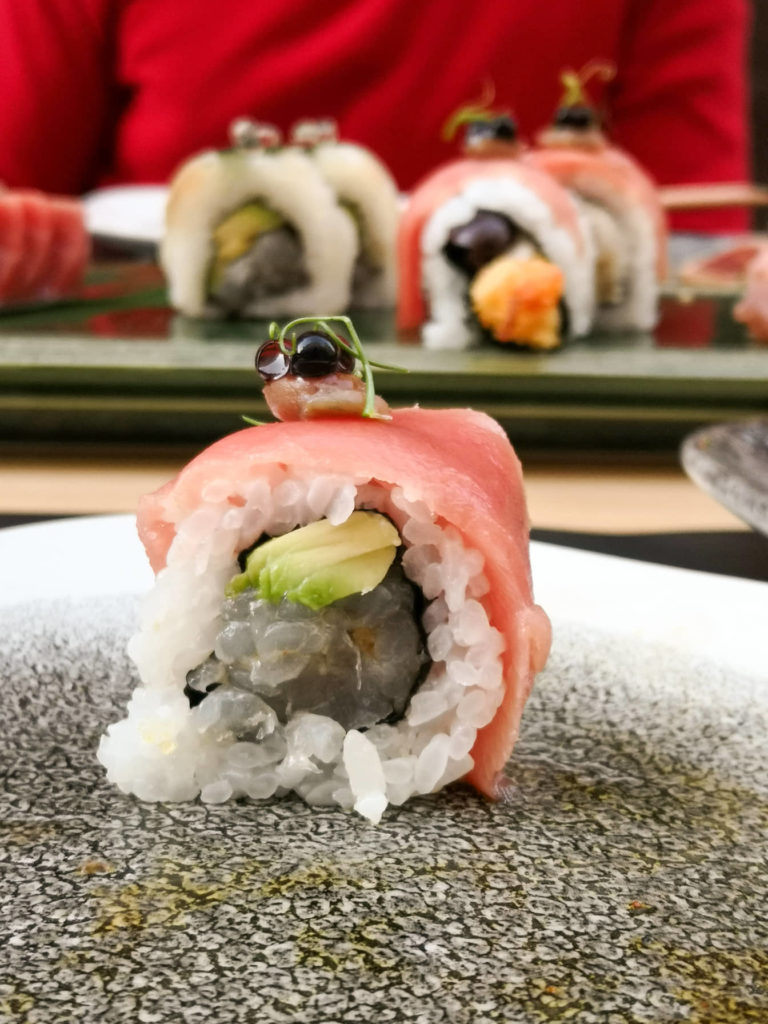 We left Maguro that Friday night on a whole new high, it was one of the best experiences I had had in Croatia. I was so excited about having a sushi restaurant in Zadar that was not only good but potentially better than Takenoko. Wow! What a compliment! And in my beloved Zadar, the city that has now adopted me.

What are my final thoughts about Maguro? Maguro has all the right ingredients to be the best restaurant in Zadar and I trust that over the next 12 months it will be recognised among the top restaurants in the city. There is a long hot summer season ahead but as we all know, sushi is always on trend. Maguro is a must visit if you’re in Zadar Old Town. As for me well, I may have a new addiction to deal with.