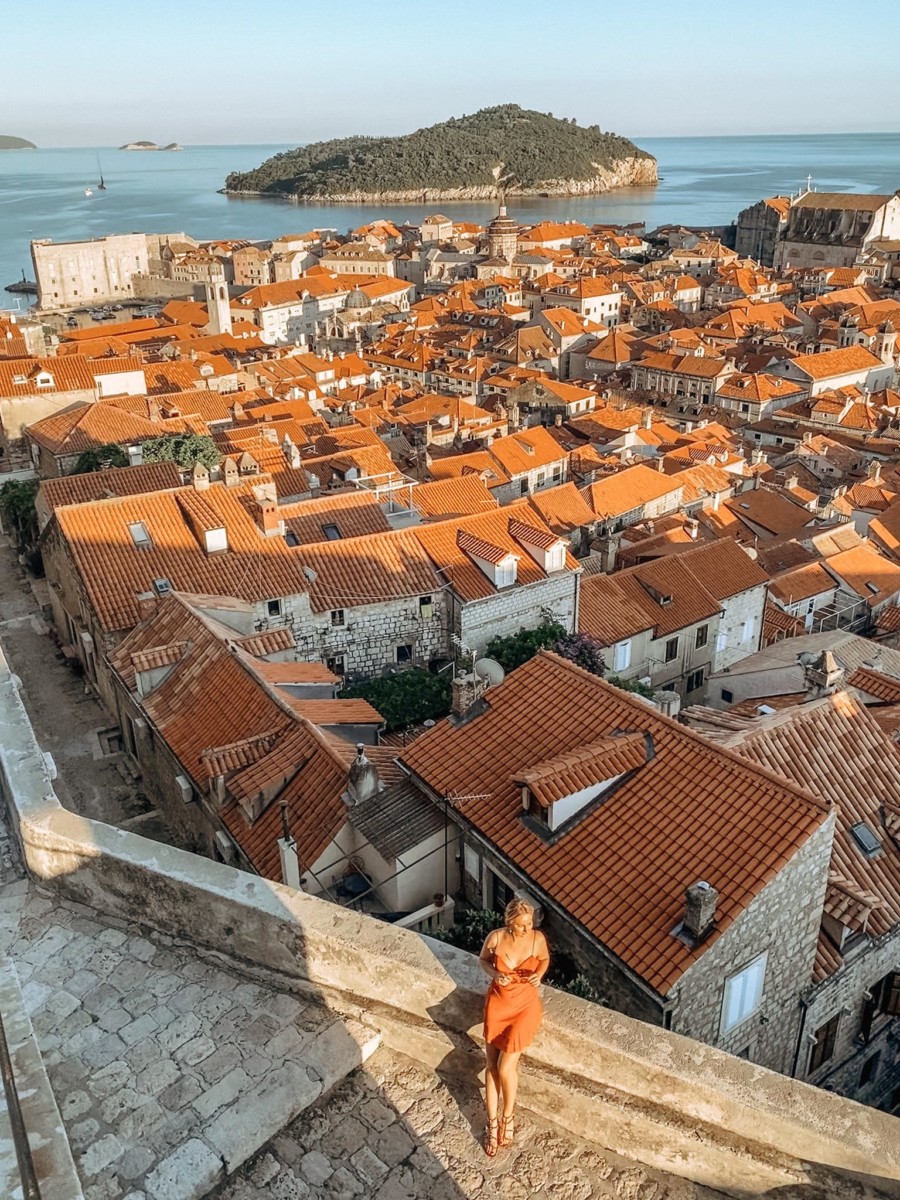 I visited Dubrovnik in Croatia four years ago and I didn’t really like it.

Yes it was beautiful, by far the most beautiful place in Croatia but my goodness was it busy. It was so busy that you could barely see the city walls of the glorious Old Town, let alone enjoy a stroll down Stradun without bumping into someone. I didn’t want to climb the historic city walls or even have a drink. It was all too much chaos and overwhelming in the sweltering summer heat.

This was then, now it’s 2020, the year of Covid-19, a virus that paused the world for a while. Things are starting to pick up all over Europe as borders begin to open up, there has literally never been a better time to visit Croatia. Dubrovnik without the crowds, is that even possible? Yes. I had the pleasure of experiencing this magical city with my husband to celebrate our belated two year wedding anniversary where we literally felt as though we were the only tourists in town.

It was phenomenal and a trip we will remember forever. 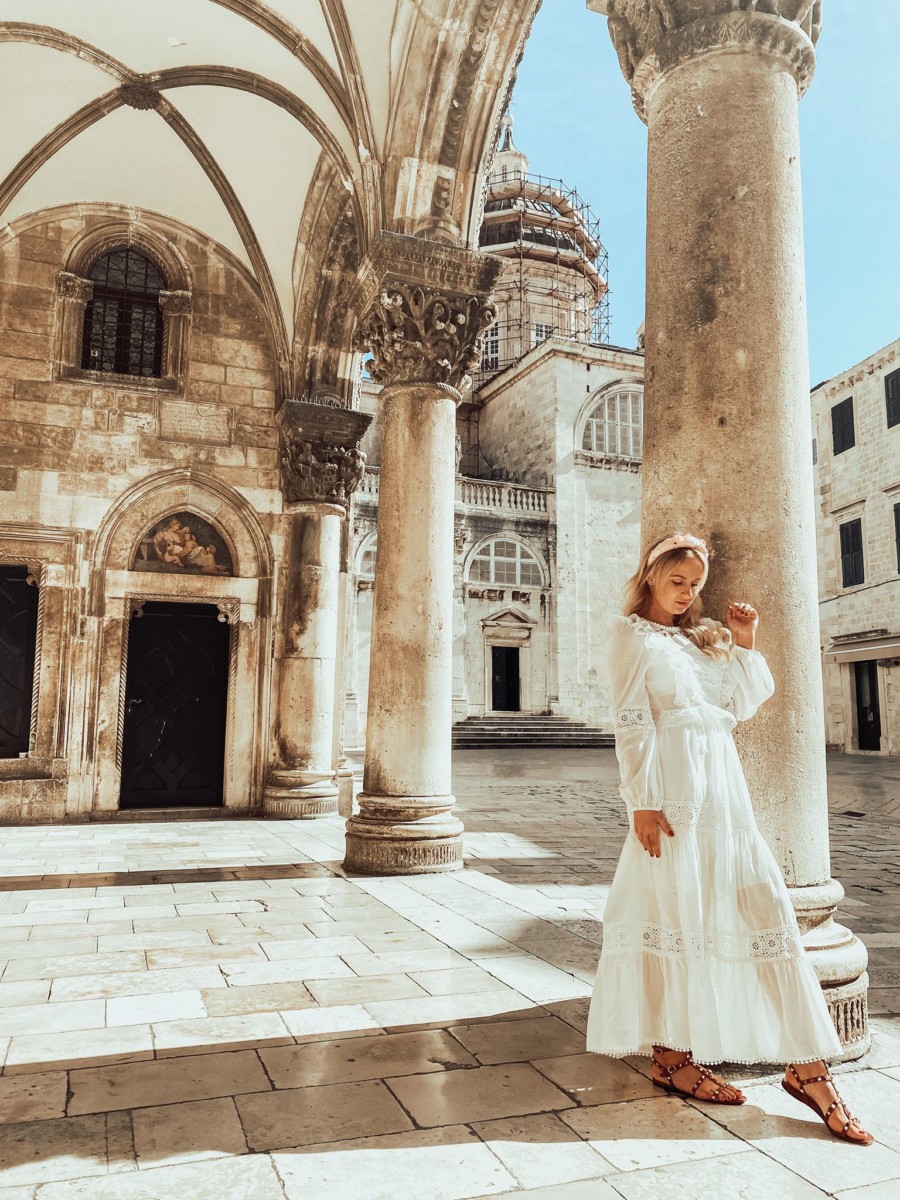 I started posting consistently on my instagram (@adrianamatak) for all my friends who sadly cannot be in Croatia this summer from Australia. There is no leaving the island until mid-September from what I hear. One message that I kept getting was that it really looked like we have Dubrovnik to ourselves. It certainly felt like it! It was so wonderful to be abe to walk around and enjoy the natural pace of the city, no rush.. samo fjaka.

Dubrovnik… without the crowds {unimaginable} 🤭 Can't be in Croatia for #Summer2020? Come away with me, virtually. I will be here for a few months, no rush, no itinerary… So if there's anywhere you recommend I must go, restaurant I must visit, town I must explore… drop me a DM. Let me take you with me ☺️ #DubrovnikCroatia

Dubrovnik is the crown jewel of Croatia, often referred to as ‘The Pearl of the Adriatic’ and has been listed on the UNESCO Heritage Site since 1979. It is probably Croatia’s most popular tourist destination. Anytime I tell someone I am Croatian, they tell me about their visit to Dubrovnik or how it’s on their bucketlist of places to visit. Dubrovnik is also famously known for being the most expensive part of Croatia however, there are plenty of accomodation and restaurant options for every type of traveller and budget. Since this trip to Dubrovnik was to celebrate our second wedding anniversary, we decided to be a little more extravagant. 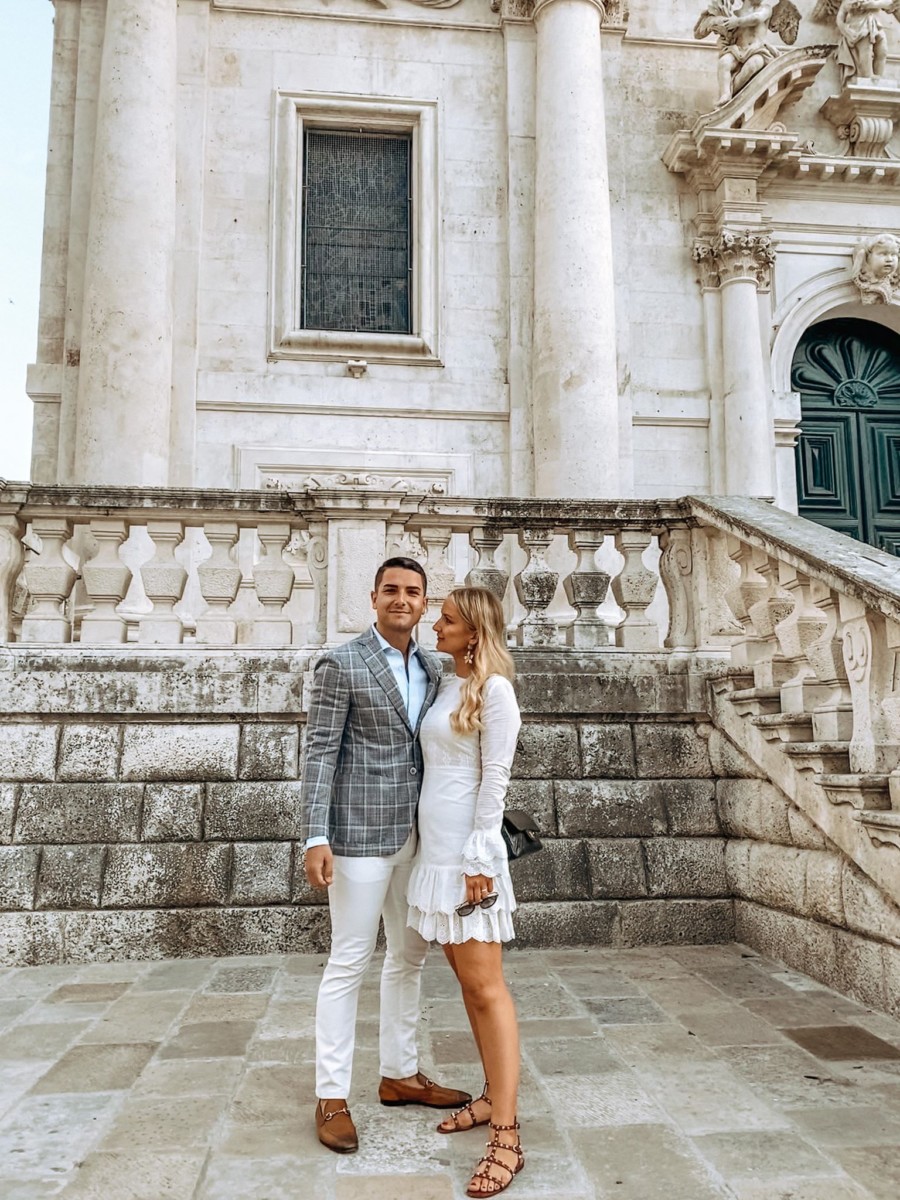 The entire Old Town in Dubrovnik is picturesque, romantic and perfect for couples! 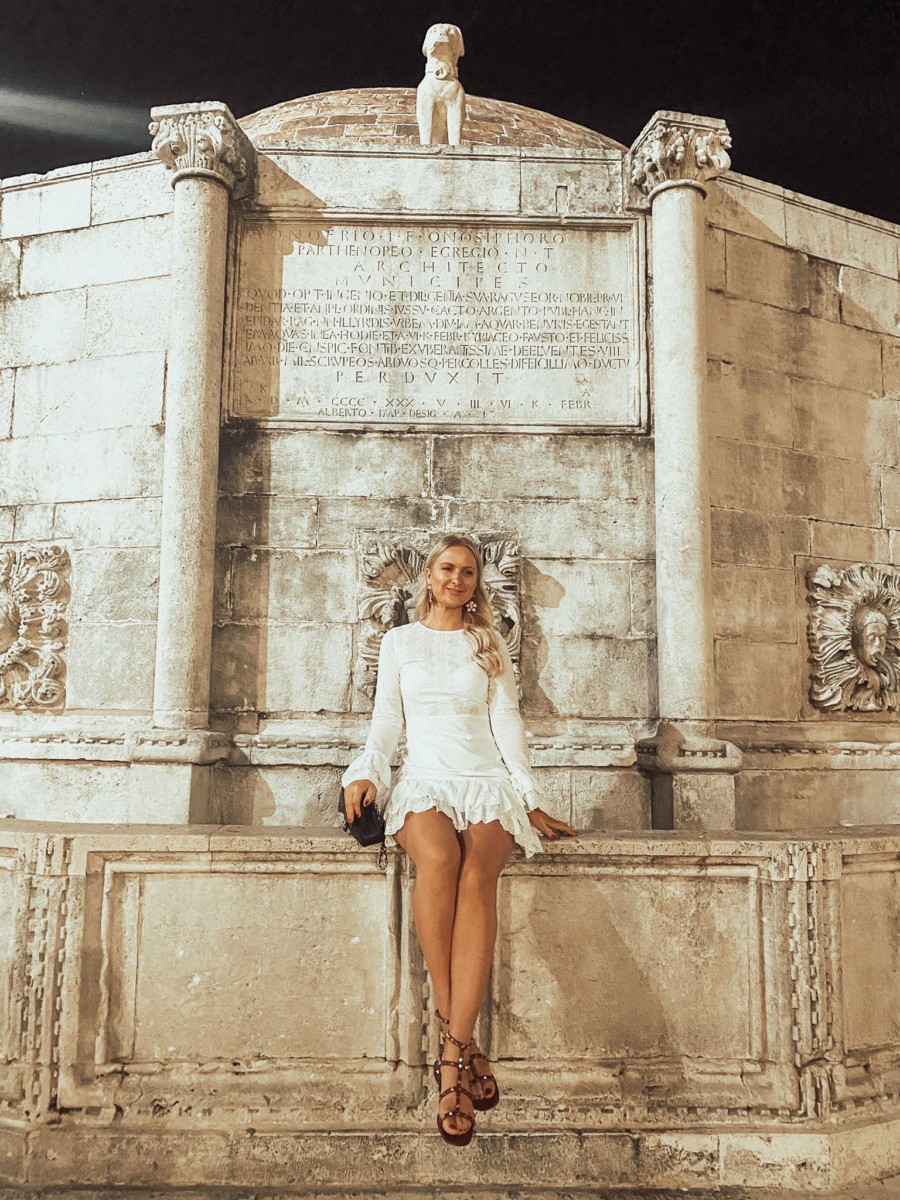 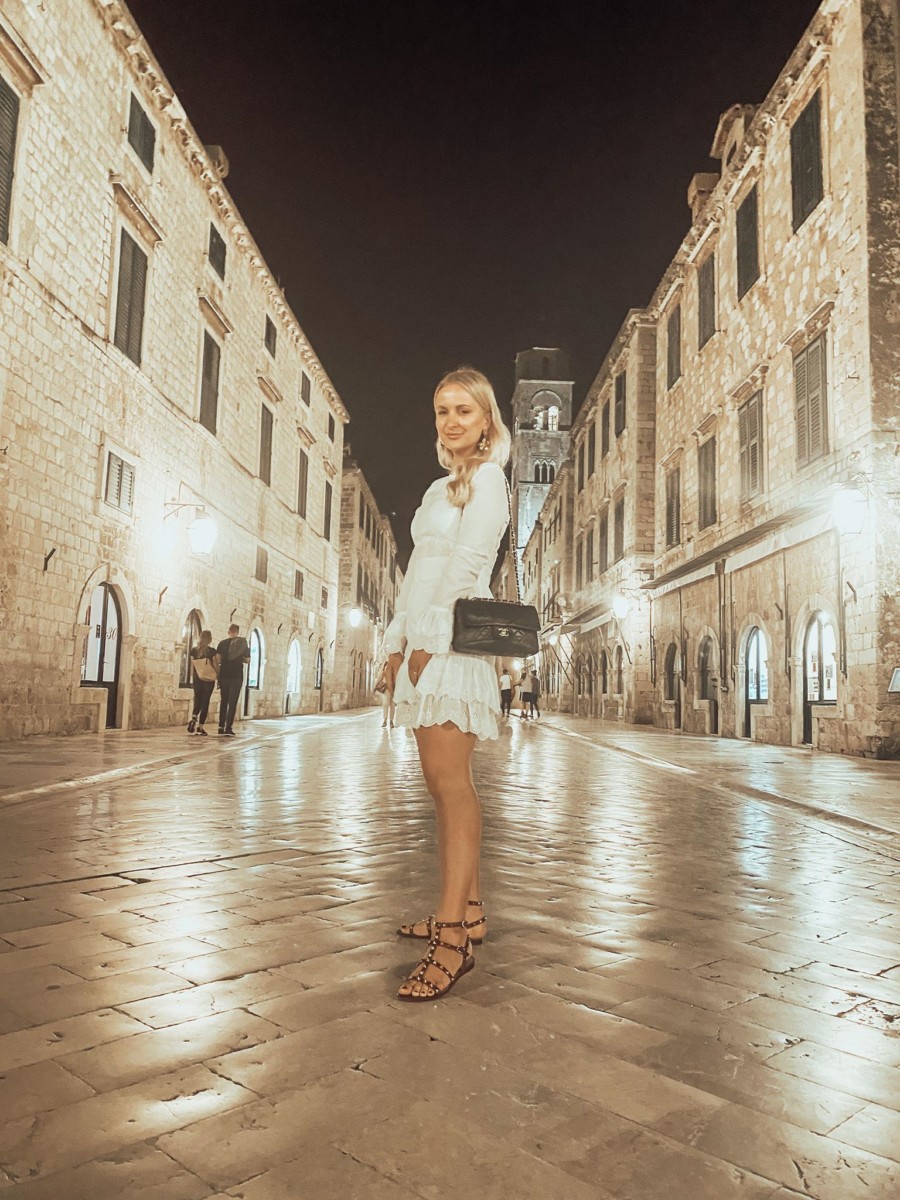 Stradun (pictured above-right) is the main street of Dubrovnik leading to the main square (Trg Luža). Onofrio’s Fountain (pictured above-left) is one of the first things you’ll notice on your right as you enter the Old Town from Pile Gate entrance. It was first initiated as the town’s main fresh water supply and still today you’ll find people drinking from the tap or filling up their water bottles. 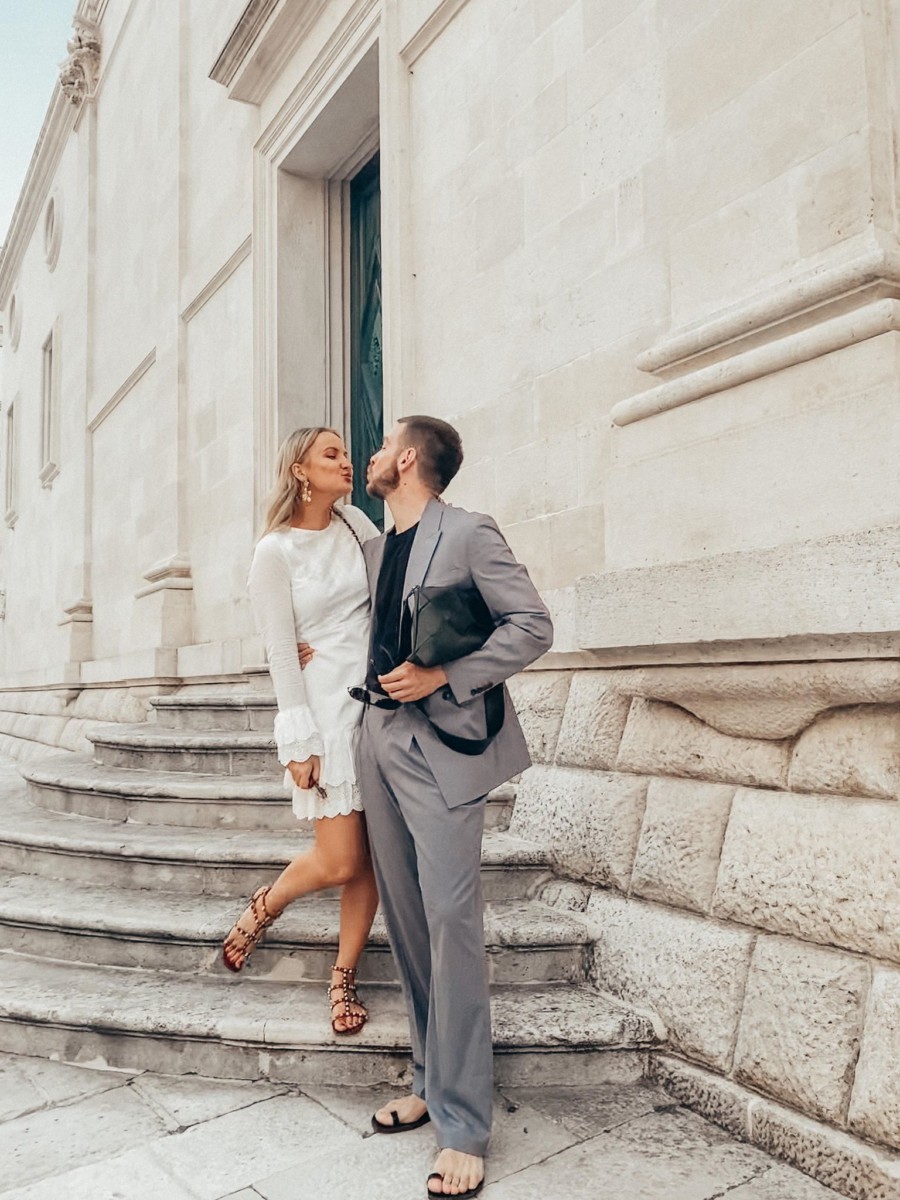 It was also soo lovely to see my dear friend and very well known make up artist, Kosta Miljkovic who was in town for a shoot! 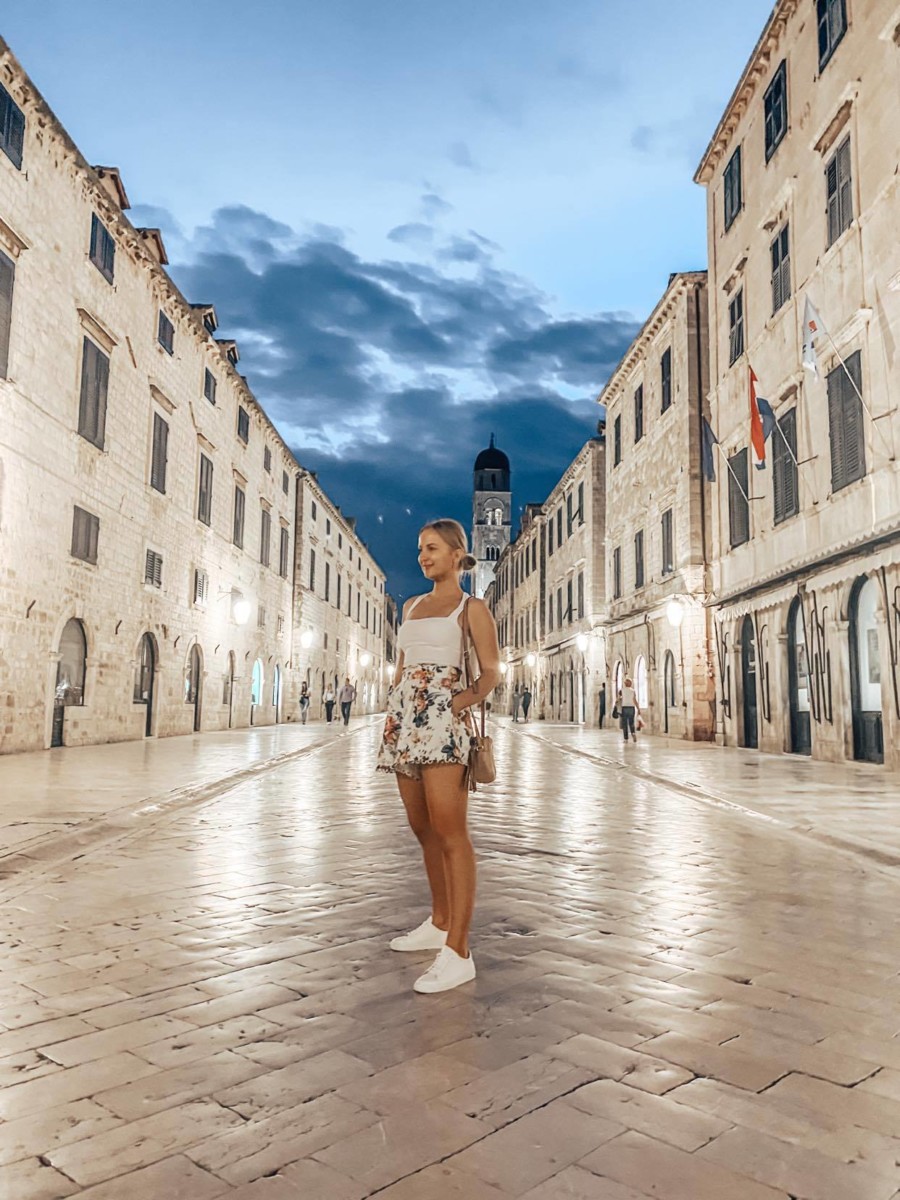 You’ve probably never seen {or imagined} Stradun could ever be this empty in June in Croatia… I know people who wake up very early in the morning for this shot! 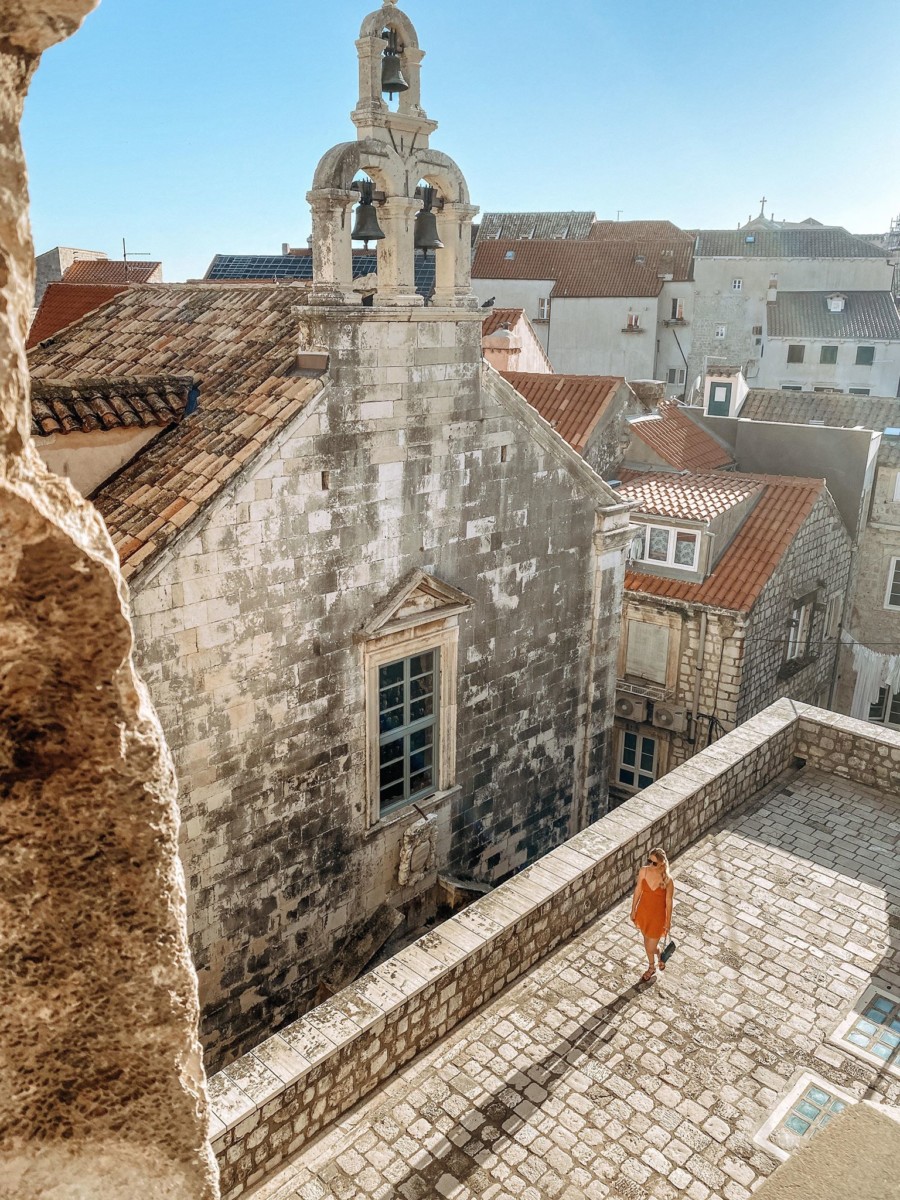 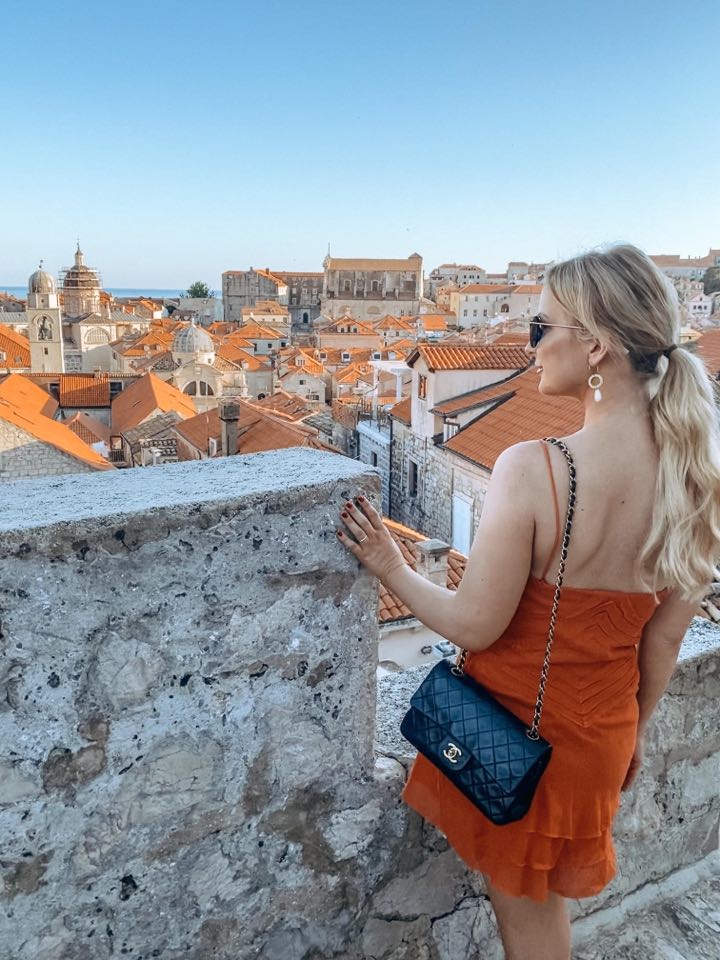 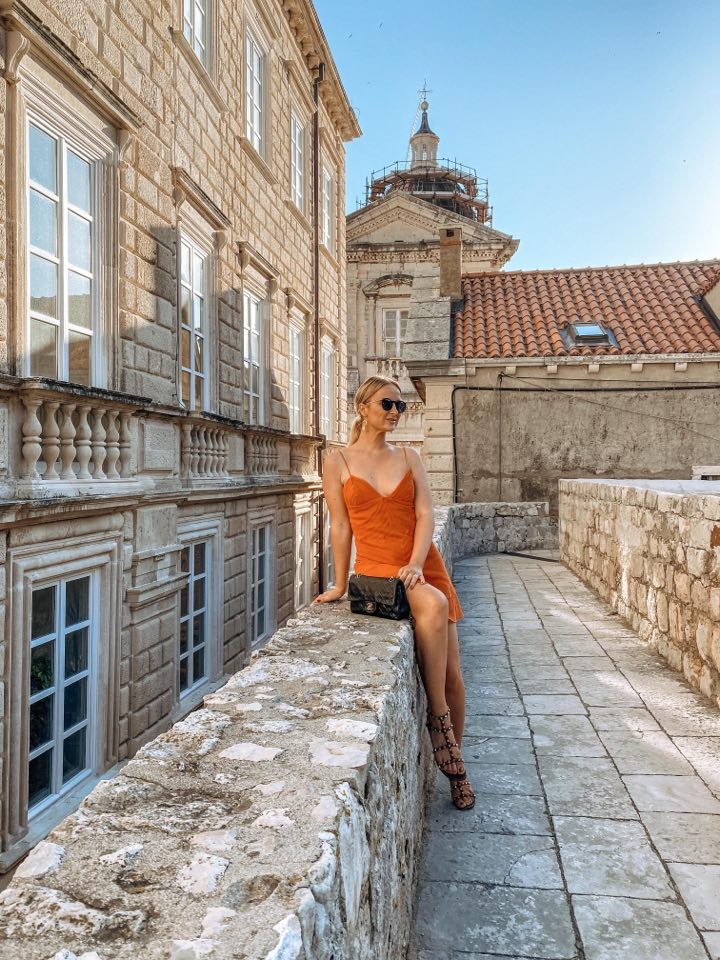 The pictures above were taken during our walk along the Walls of Dubrovnik during sunset (6pm-730pm, the walls close at 730pm). It took about 90minutes to complete the walk but our wandering was frequently interrupted by me pausing for photos, as I’m sure yours will be too. It costs 50kn (approx. 6.62€- it’s usually 200kn) per person and the ticket is valid for 72 hrs. This also gives you access to Fort Lovrijenac which you will see towering on the edge of a cliff next to the Old Town. The Walls of Dubrovnik require a lot of walking and there are plenty of stairs to go up and down. I must admit that they caught me by surprise but every step was worth it! 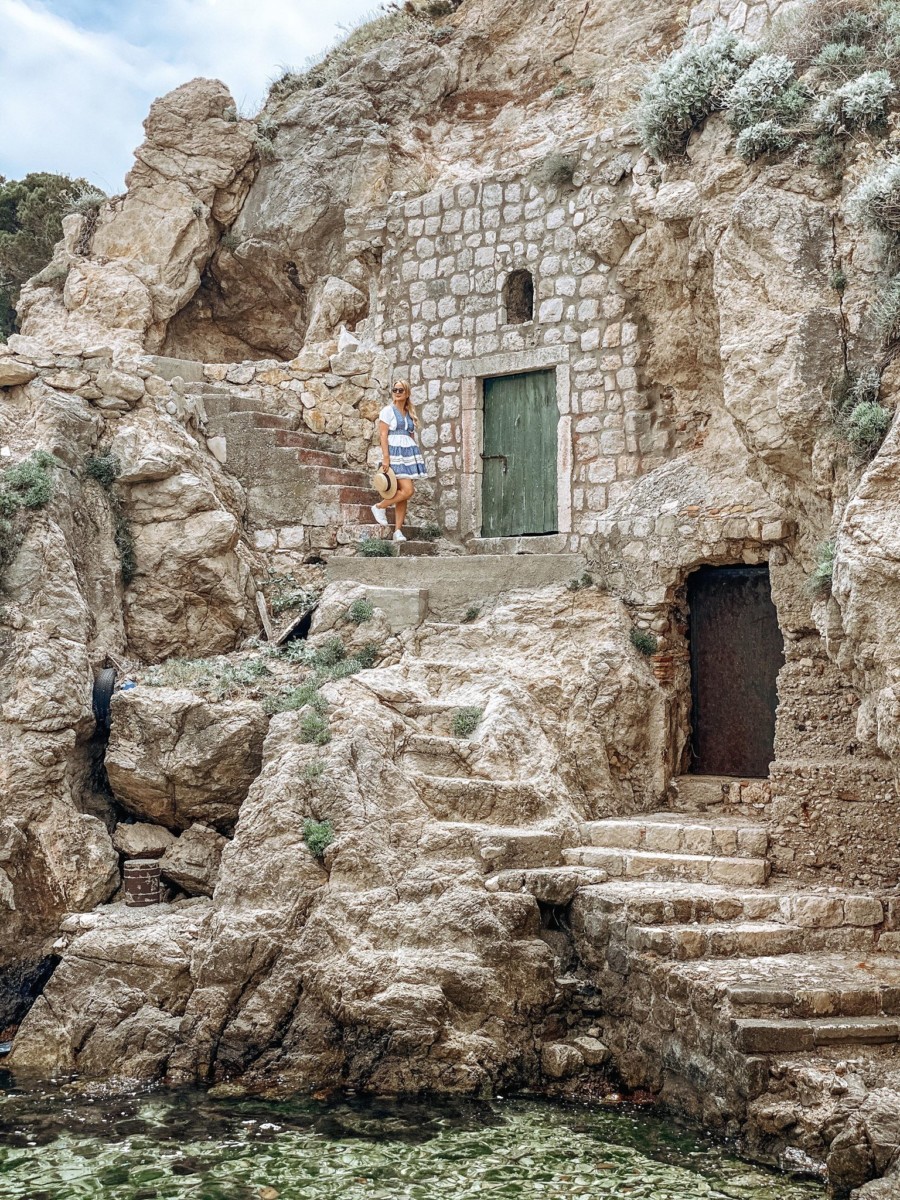 You access Fort Lovrijenac from a small town right outside the Old Town at the Pile Gate entrance. Try to find any path across from the newly refurbished Hilton Imperial. All paths lead to this little paradise where once you pass the quaint stoned homes, you’ll notice a turquoise bay (Pile Beach), the meeting point for those into their watersports such as kayaking. I had to stop and take a picture before I made my way up to the fort! 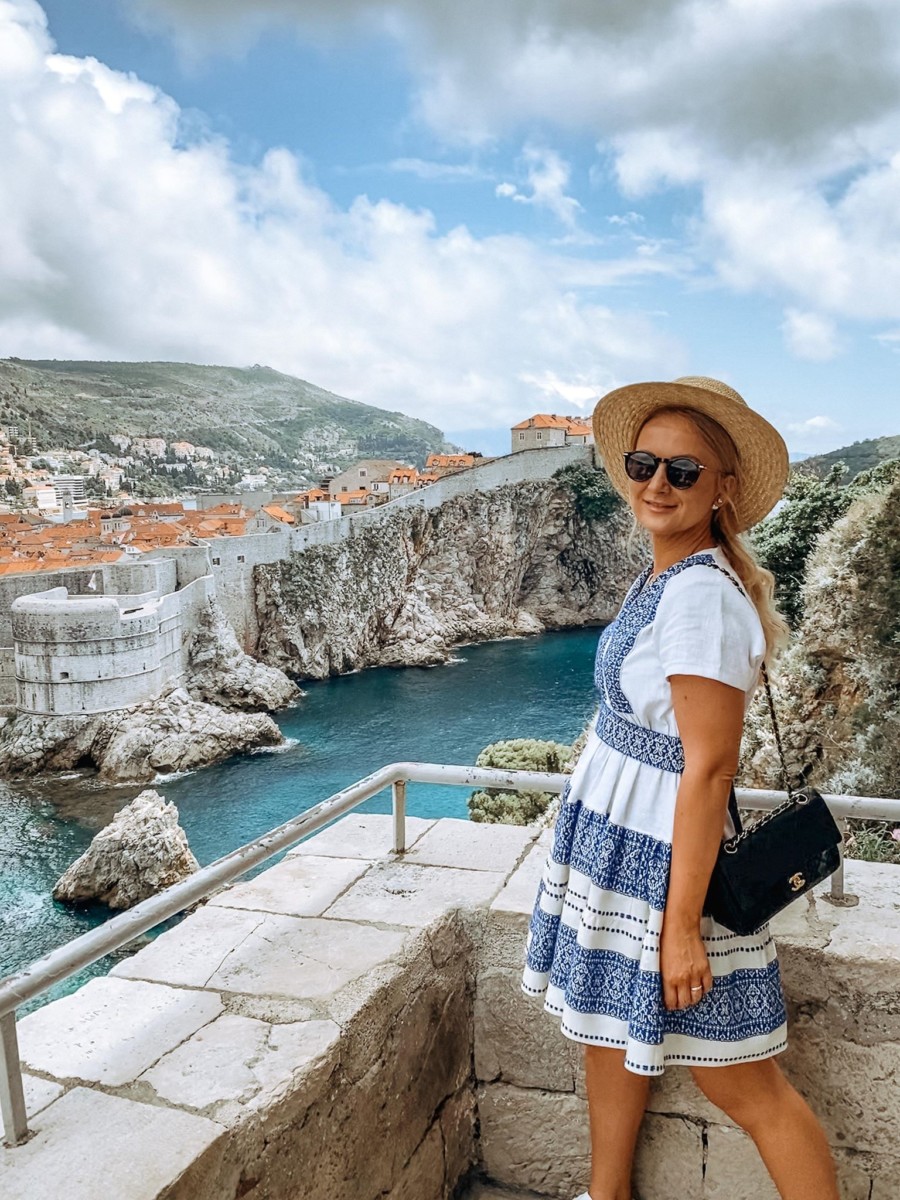 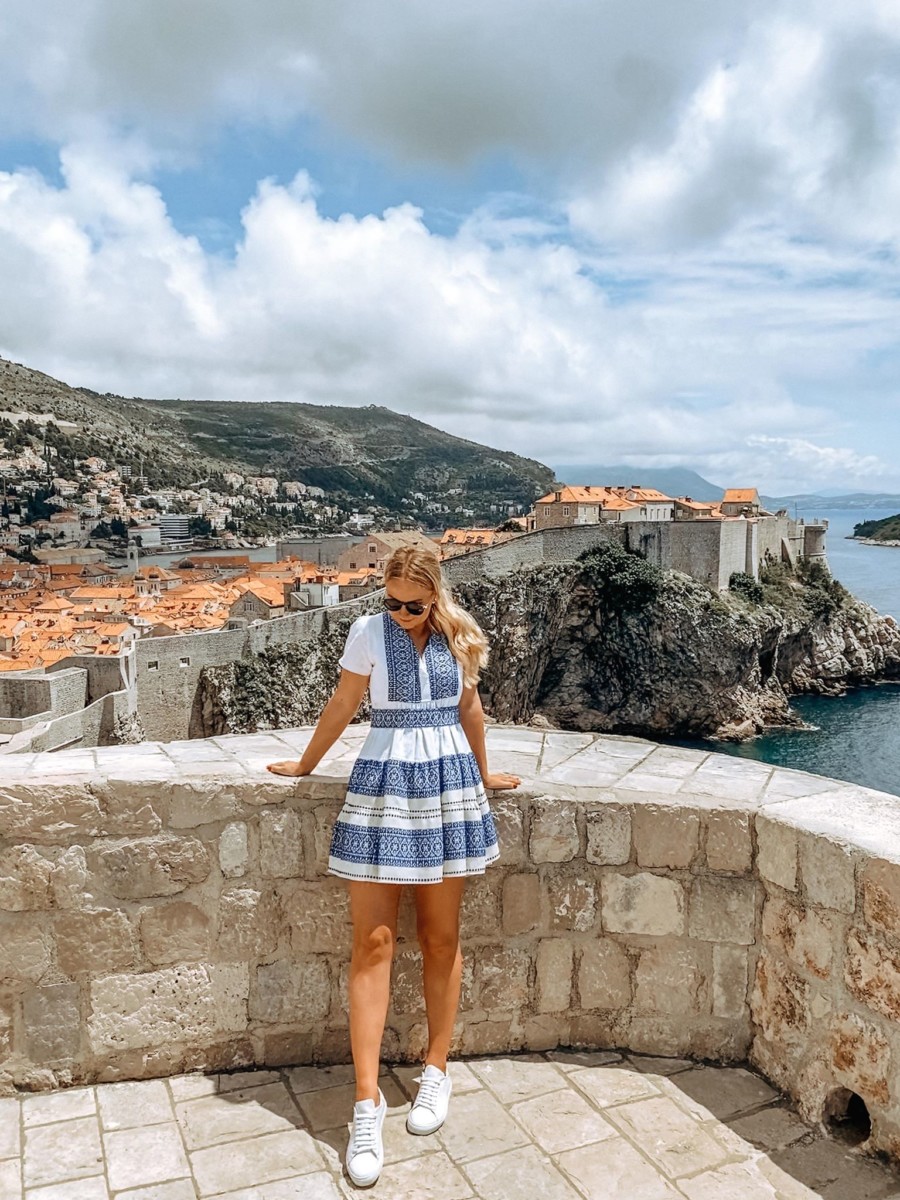 People beware! There’s  A LOT of stairs involved in this journey so make sure you’re wearing comfortable shoes! Actually, don’t bother with heels anywhere in Dubrovnik, you won’t be comfortable and you’ll also look out of place.

Fort Lovrijenac towers 37m above the cliff’s edge and will undoubtably give you some of the most stunning photos outside of Old Town Dubrovnik. 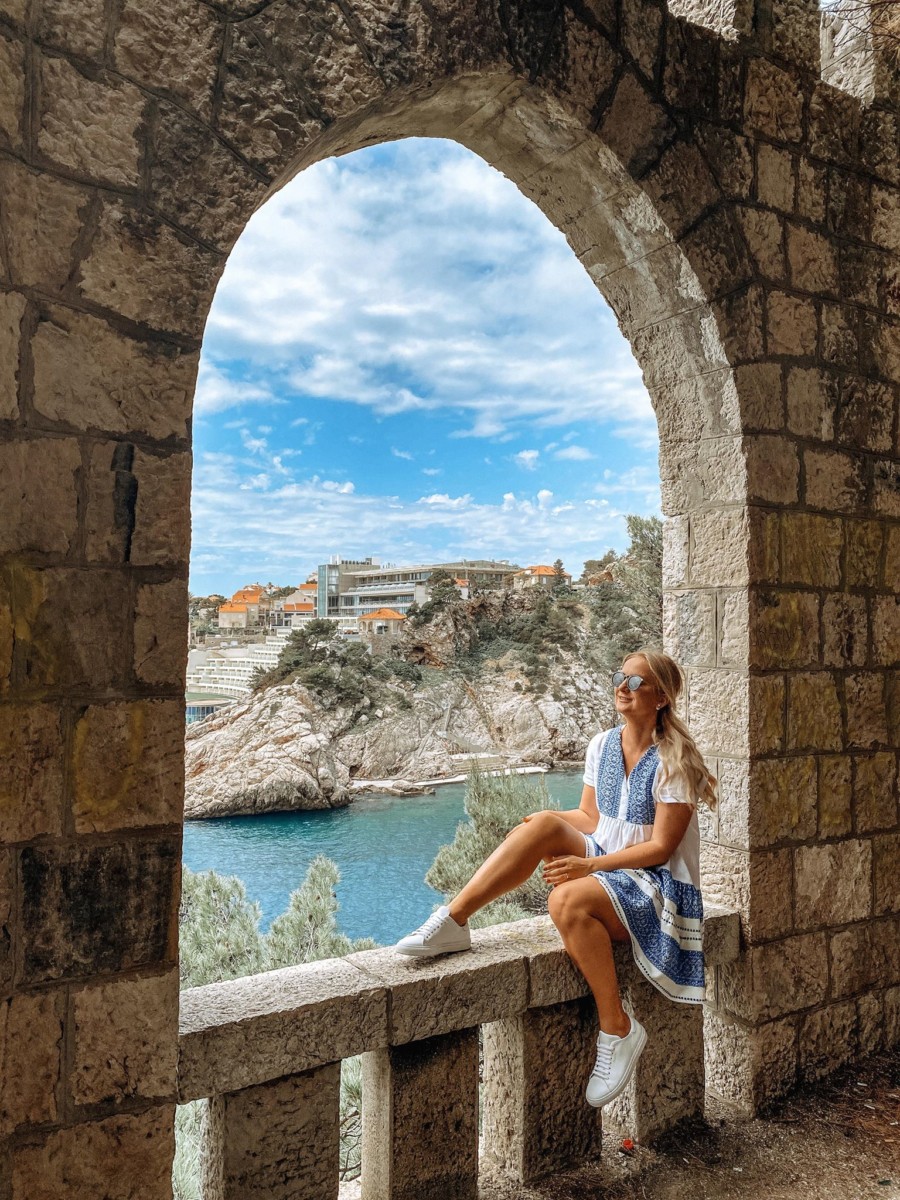 Last year, my husband and I fell in love with the masterpiece Korta Katarina in Orebic, not too far from Dubrovnik actually and across from Korcula Old Town. This year we have fallen in love with Vila Čingrija, a completely run down villa that was owned by Pero Čingrija, a prominent local Politician and Doctor. I’ve set my intension out to the universe and I trust it will come back to me one of these years. Vila Čingrija is currently owned by the City of Dubrovnik and is open to the public. 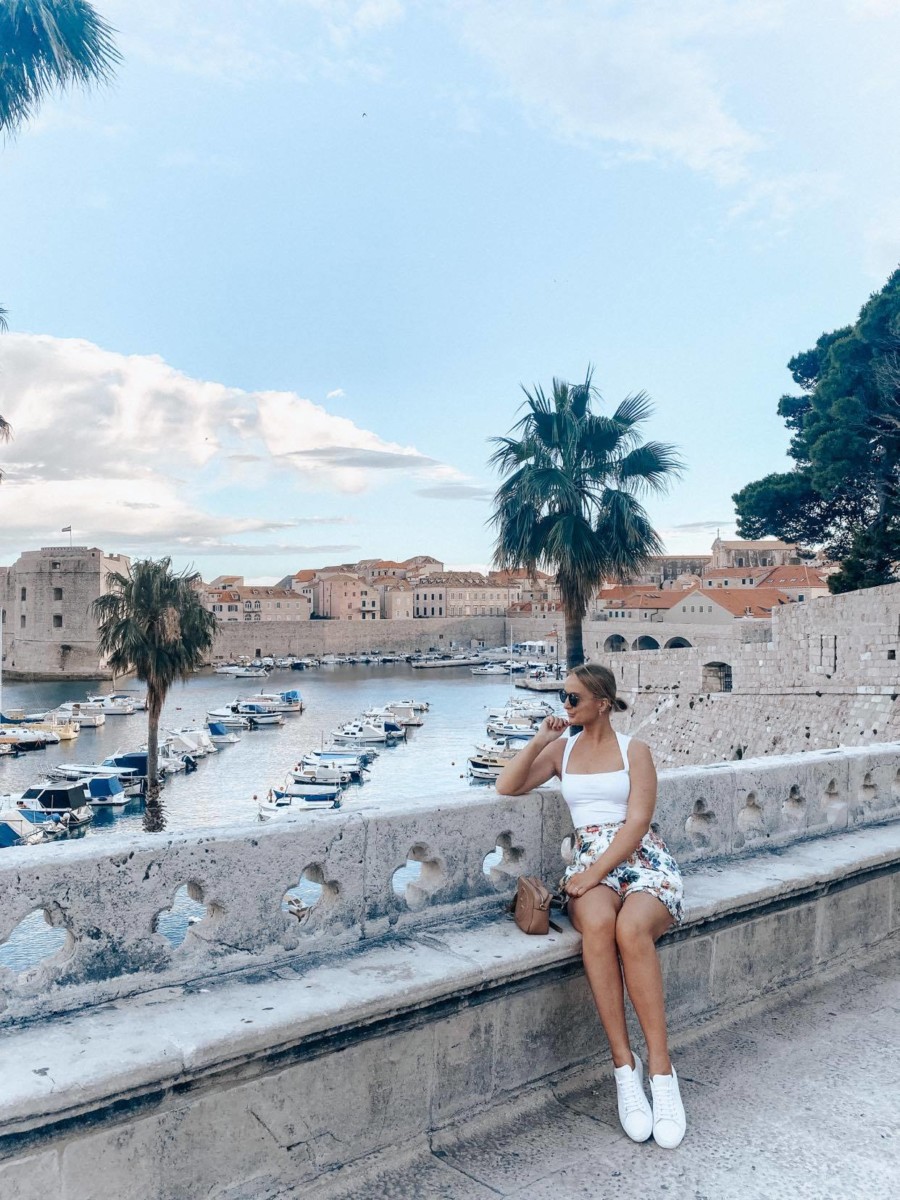 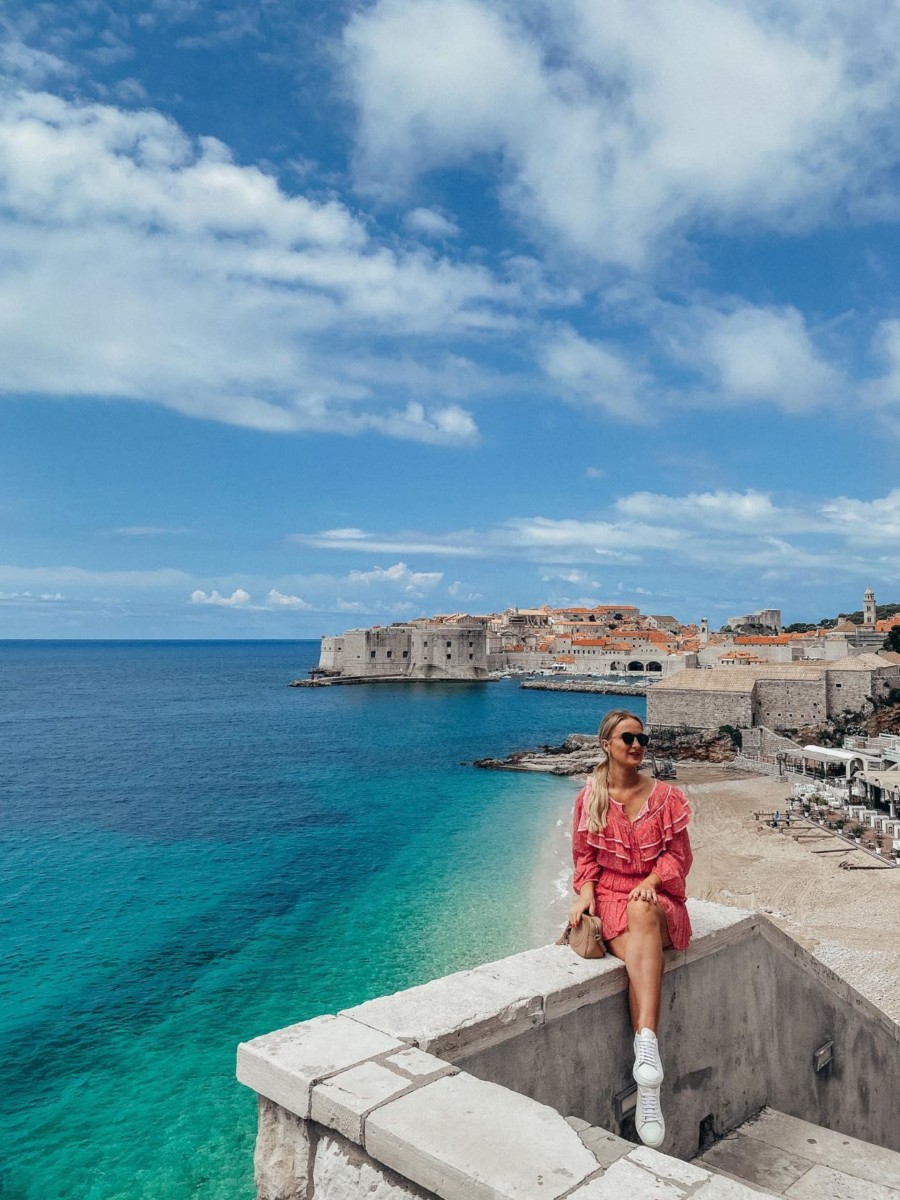 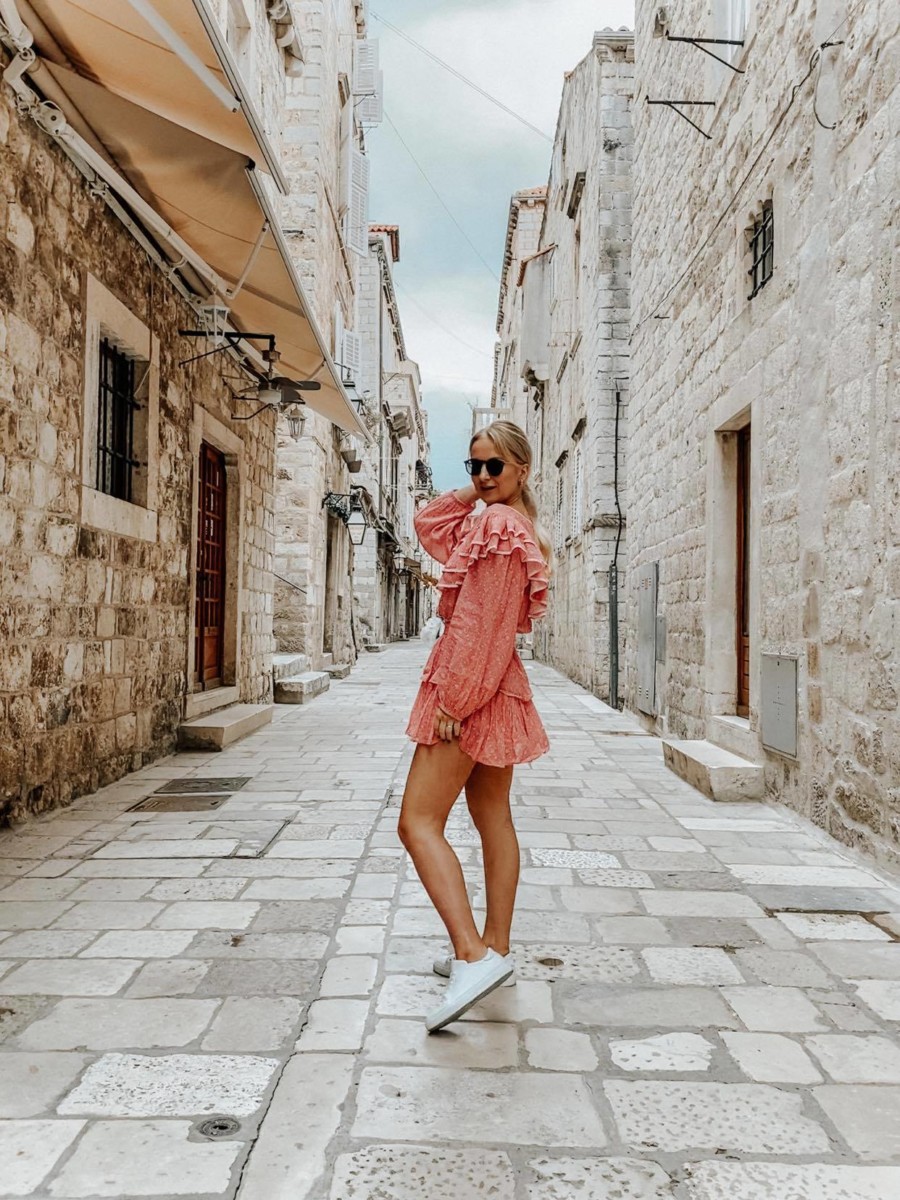 So I’ll be “stuck” on holidays in Croatia until the UK drops it’s 14 day quaratine for people who return from Europe. Apparently, Croatia is one of the countries that will have an agreed  quarantine-free “air-bridge” with the UK very soon. Regardless, we don’t plan on going back until September.

Speaking of viruses and quarantine, did you know that Dubrovnik (at the time called The Republic of Ragusa) was the first European state to introduce the first quarantine law in 1377 where everyone coming in from sea was forced into a mandatory quaratine at Lazzarettos only 300m from the Walls of Dubrovnik? 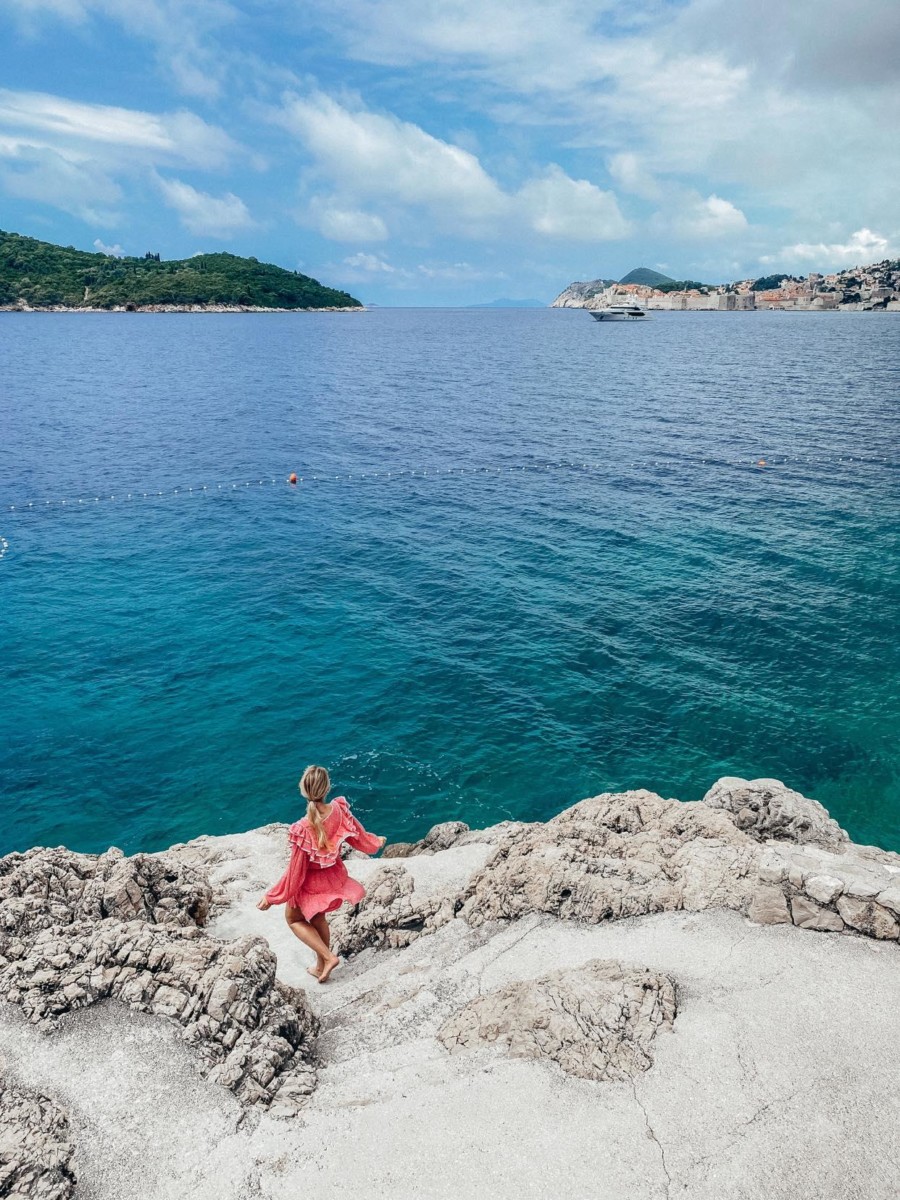 I had such a lovely time in Dubrovnik, this trip made me appreciate it in a different light. I respect the city, it’s history and the local people a whole lot more now. They are so proud of their gorgeous city and why shouldn’t they be? I will never ever say to anyone again that ‘Dubrovnik is not Croatia’ because Dubrovnik IS Croatia, the real Croatia. Dubrovnik is a jewel.

Be sure to catch up on my Dubrovnik Highlights on Instagram and don’t forget to follow me also to stay up to date with my journey through Croatia this summer 2020.