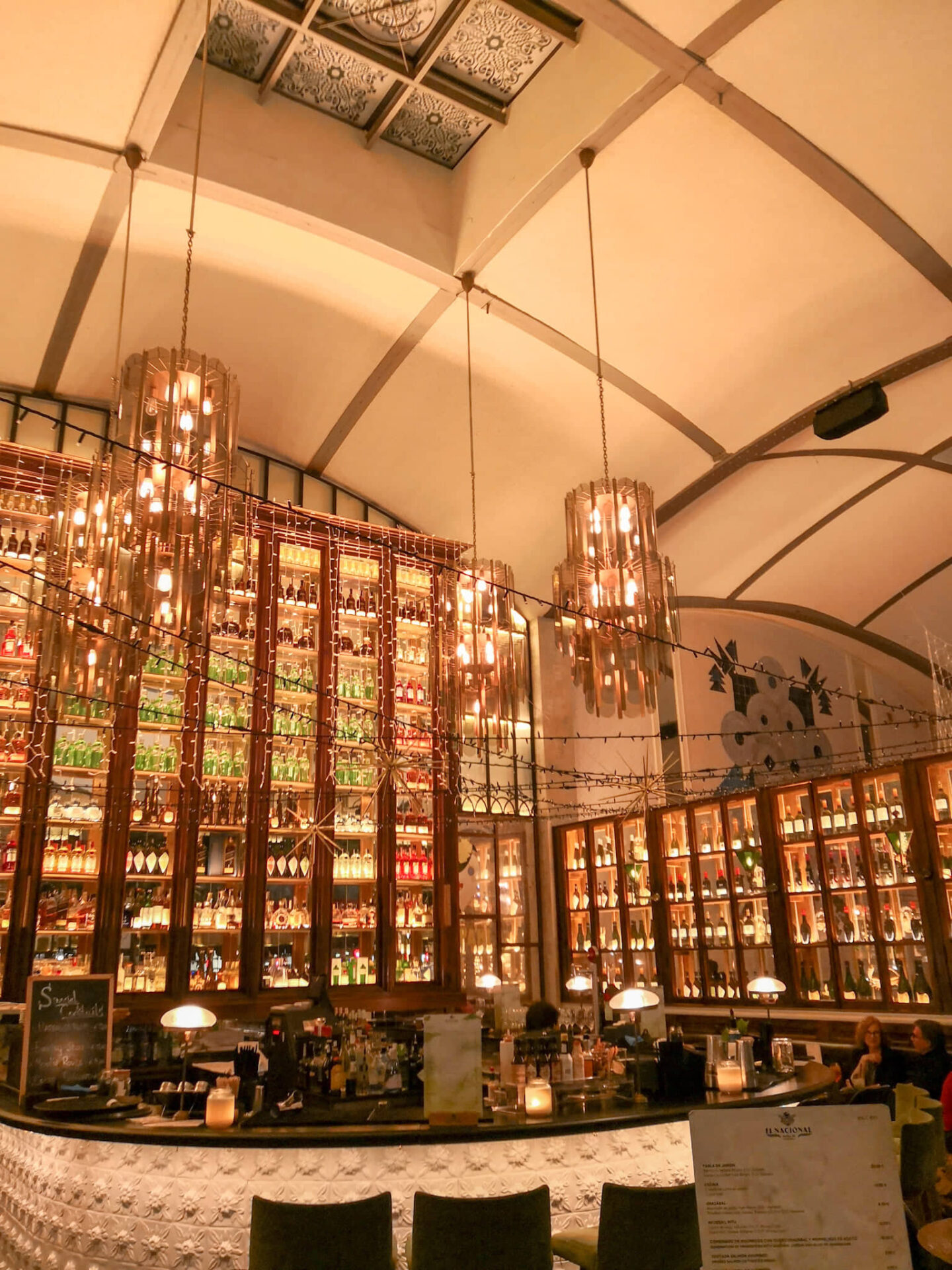 I spent my whole 20s getting into VIP booths and private members clubs while in my 30s I’ve realised that I am devoted to getting a table at a top restaurant.  Two weeks out of our trip to Barcelona, I began my “Best restaurants in Barcelona” search but imagine my grief witnessing with my own eyes that “Tickets” hasn’t got a table for two for 60 days. Wtf? I called the concierge at Hotel Arts Barcelona and explain that we’ll be staying in 2 weeks time for a week and if there was anything he could do on our behalf. “No sorry, their online booking system opens 12 am sharp each night and you must book in advance of 60 days.” Well, this doesn’t really help the spontaneous travellers like my husband and me who want the best and want it now. The concierge did inform me that some people do get lucky just by showing up as there can be a cancellation. There’s a bit of hope in the air. I eventually get over it. Barcelona literally has 22 Michelin Star Restaurants (2018) and hundreds more that are world class quality. To be honest, during our time in Barcelona with so much going on every day, getting a table at Tickets was the last thing on my mind.

I’d also like to mention that although a hotel concierge is usually a great source to use in regards to planning your day and where you’ll eat, I must admit we had one recommendation from the concierge from Hotel Arts that wasn’t good. My husband was after authentic Spanish paella for lunch. We were recommended La Gavina, a restaurant by the marina overlooking the super yachts which in theory should be a great restaurant but really is a tourist trap. If you like any of the restaurants along La Ramblas then La Gavina is for you, however if your taste is a little more specialised and you can tell the difference between fresh lobster and lobster that is a day old, then maybe give this restaurant a miss.

Enigma is Barcelona’s most secretive restaurant requiring a deposit and code to get through the door. It’s under the same elBarri umbrella as Tickets and already has a Michelin Star. I won’t go into too much detail about it here as I have written about my experience at Enigma here.

El Nacional was recommended by a friend who lives in Barcelona and is located just off Passeig de Gràcia, a street devoted to luxury boutiques, El Nacional was opened in 2014 and is a fairly new concept in Barcelona, the first of it’s kind. The former automobile warehouse has now being transformed into a multi space gastronomic experience which includes four different restaurants and four specialised bars. At El Nacional, you’ll find traditional Spanish cuisine but word on the street is that locals consider this place in Barcelona overpriced. overpriced or not, I had a great meal there. After a bit of a google stalk, I came across an image of an octopus leg and immediately set my heart on ordering that, which I did and don’t regret. It was one of the best octopus meals I have ever eaten. My husband ordered the osso buco and was also happy with his meal. 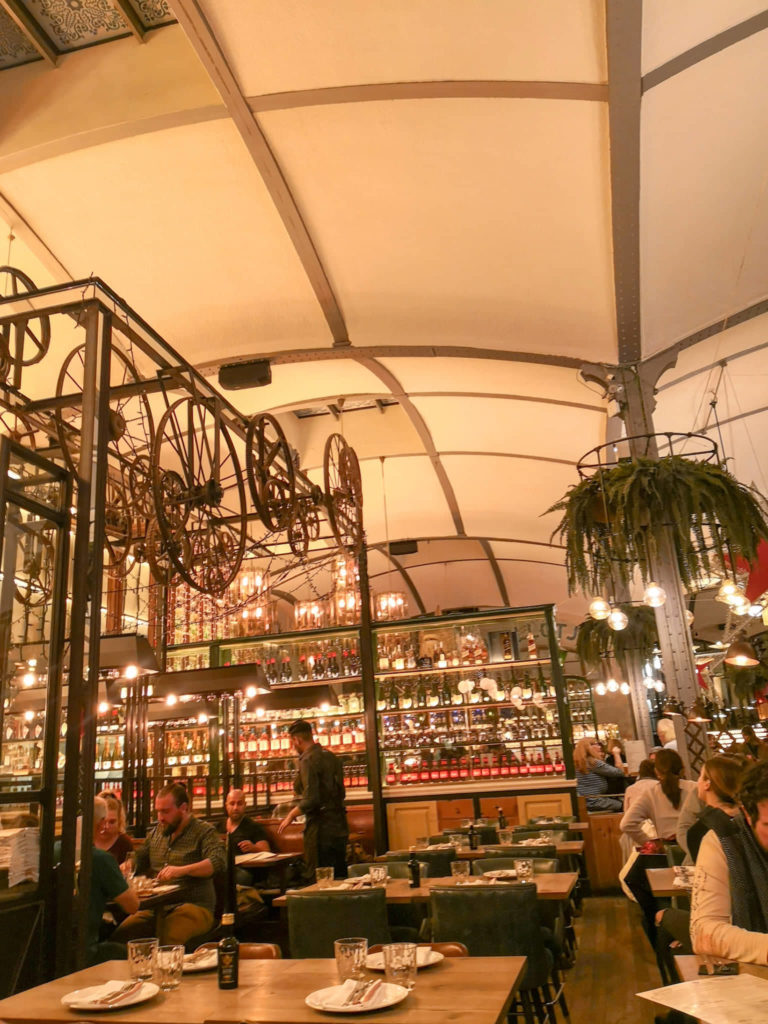 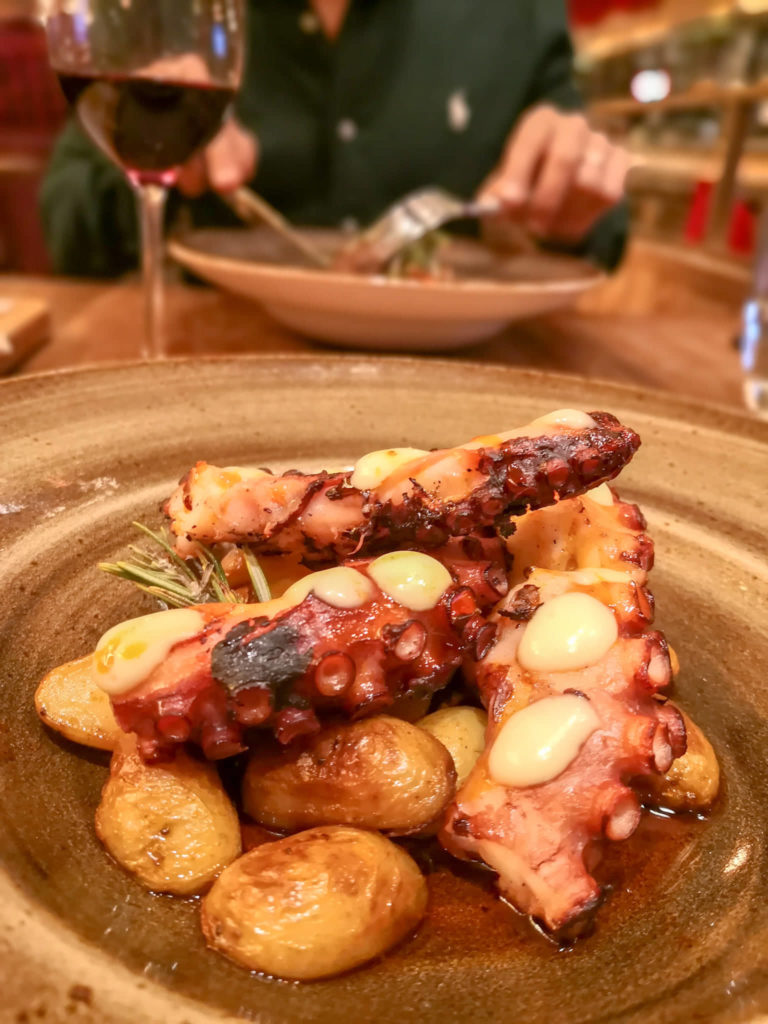 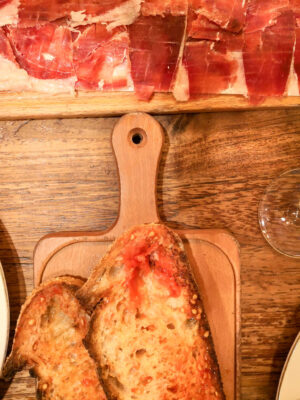 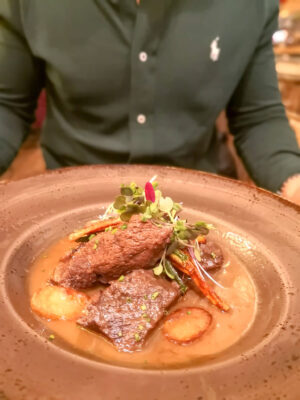 This was my second visit to Barcelona’s most iconic seafood restaurant, Botafumeiro where the saying goes, “The fish can’t get any fresher.” Botafumeiro has been around since 1975 and is one of the most successful businesses in Barcelona. The menu is not fussy or creative like at Enigma but it is perfect and exactly what you would expect from a top-notch seafood restaurant. Botafumeiro is located in the top-notch and upscale Gracia neighbourhood and caters for an upscale clientele. A lot of the time when you mention Botafumeiro around Barcelona, you’ll hear people say that it’s expensive, but that would also be subjective to what one considers expensive. It’s also very busy, so book ahead for a good table.

My husband and I shared a tuna tartare for a starter which was phenomenal and also shared a seafood platter, which was huge for two people. The seafood platter consisted of lobster, langoustines, prawns and various types of clams. It was a lot of seafood but we managed to get through most of it. 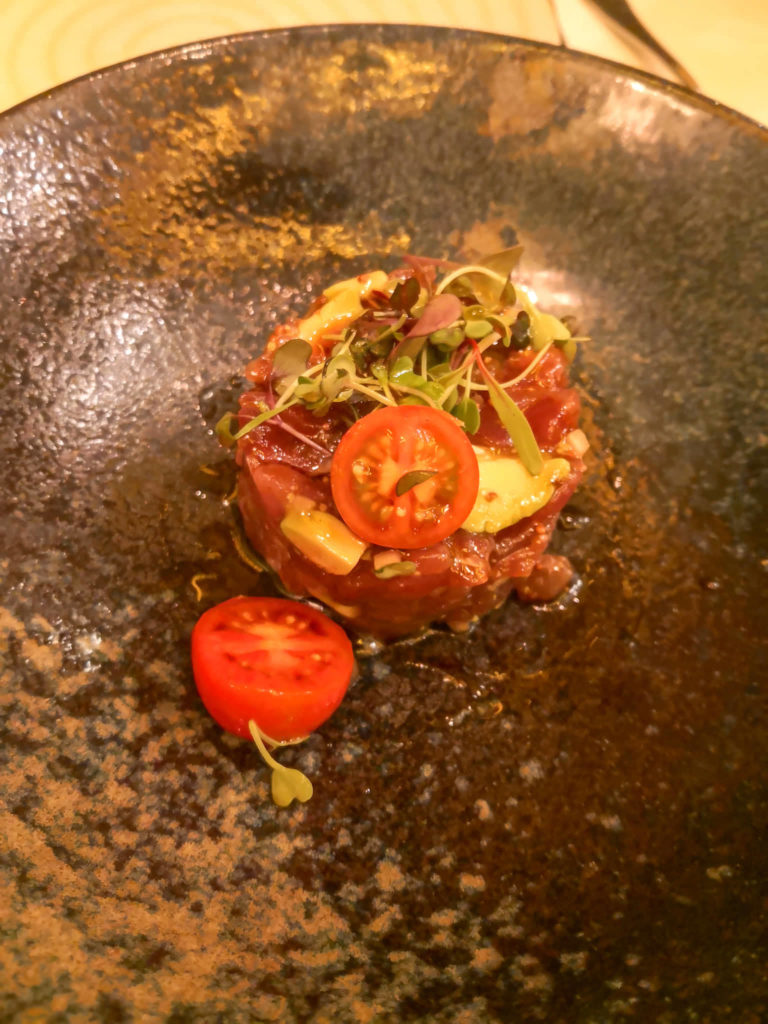 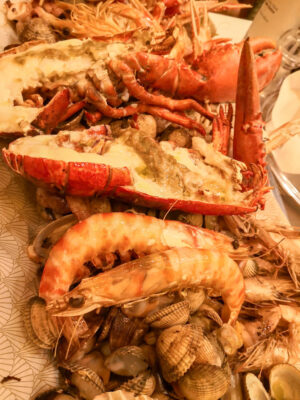 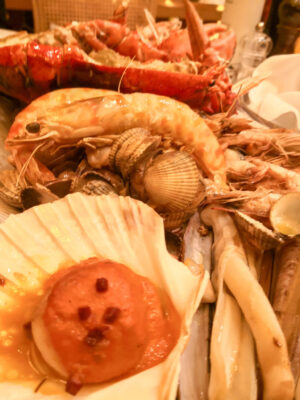 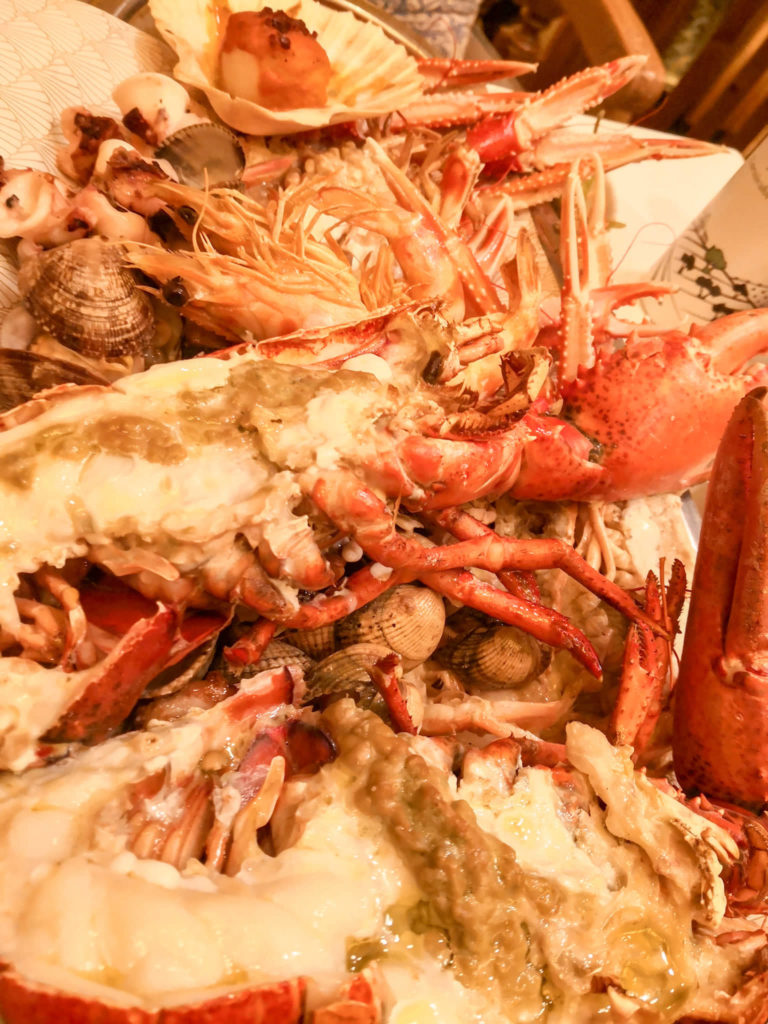 As much as I am trying to kick my sugar addiction to the curb these days, I do make a few exceptions. At Botafumeiro there is a very tempting dessert selection. Give in, it’s worth it. 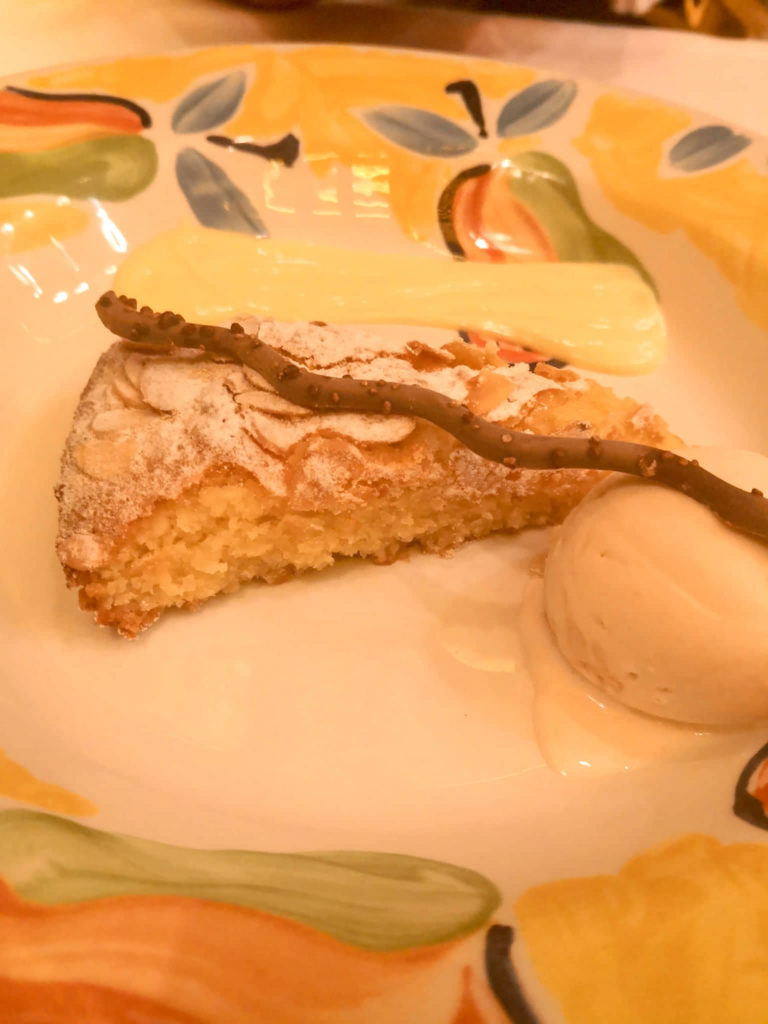 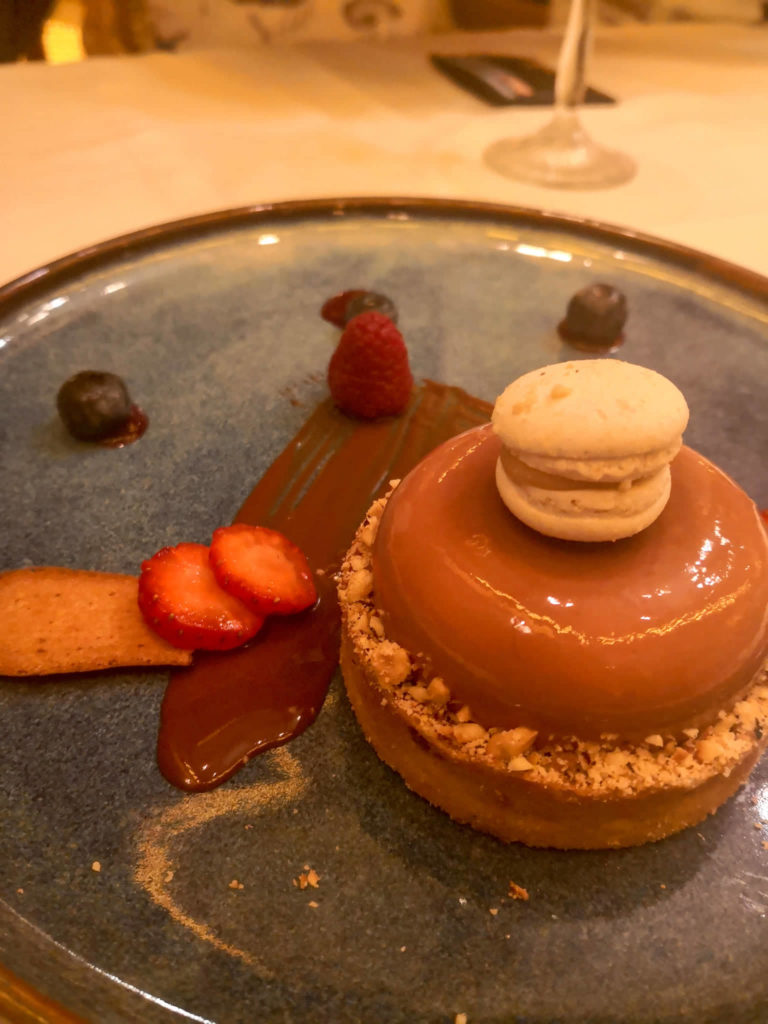 If you’re after one memorable higher end restaurant experience in Barcelona, I highly recommend Botafumeiro.

Whenever someone asks me about where to eat in Barcelona, I recommend Cuisines Santa Caterina. I have been several times over the past four years and I love it. This is another restaurant that is always busy. On this particular visit, I wanted to show my husband where it was so that we could have dinner there sometime during our trip. We ended up having a quick mezze at the bar. Cuisines Santa Caterina is literally a 2minute walk from the Barcelona Cathedral in the Gothic Quarter. Open for breakfast, lunch and dinner they serve tapas and traditional Mediterranean cuisine. Four years ago they did have sushi on the menu but it’s no longer available, just an FYI.

As I said, we had a quick mezze stop here but it was definitely worth it. Jamon is Spain’s answer to Croatia’s pršut and can be found in probably every single restaurant in the country so you won’t miss Croatia too much. 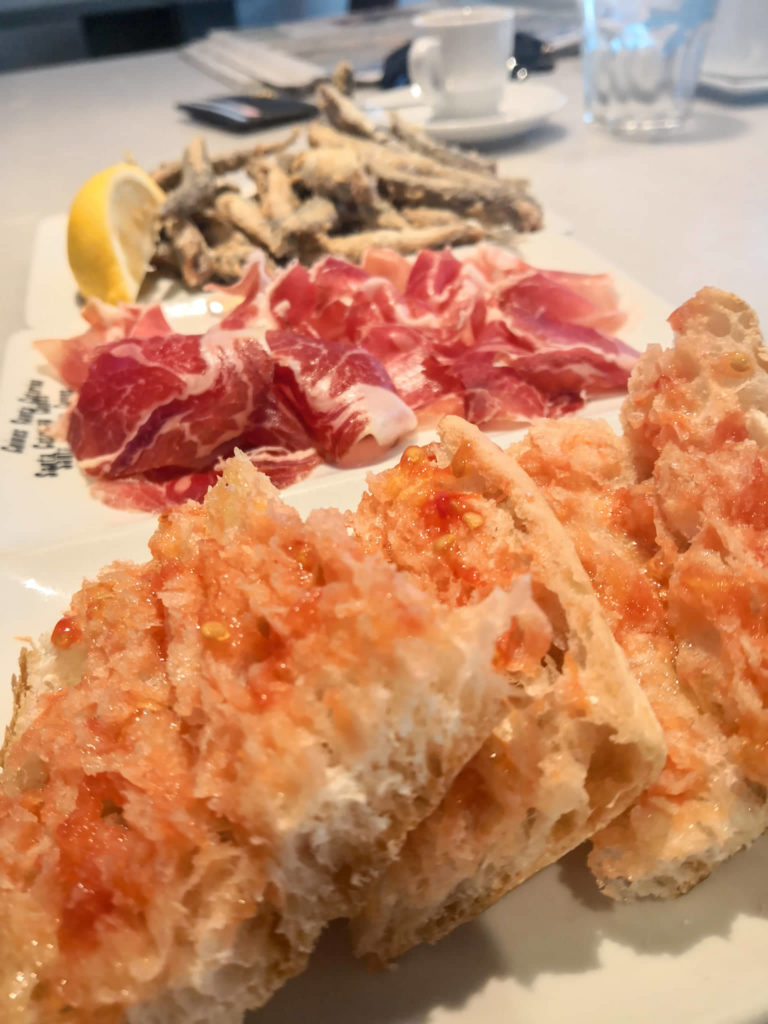 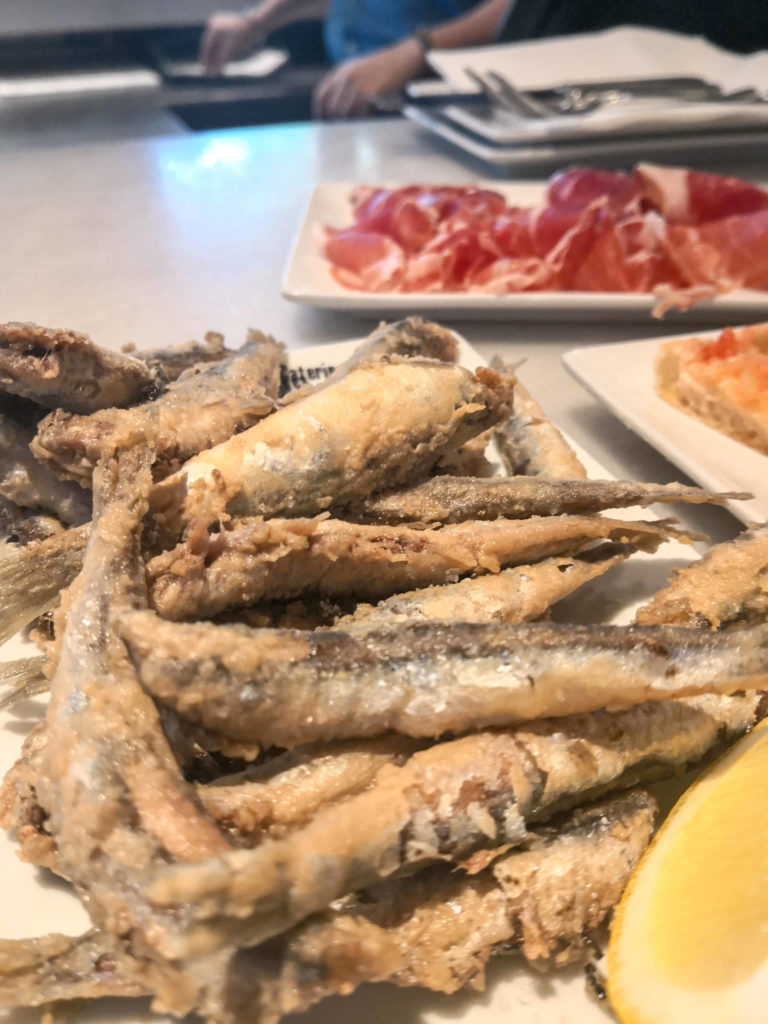 Five. Brunch & Cake by the sea

The concept of brunch is still quite foreign to Croatia, in Barcelona it’s a whole different story. If you’re looking for a vegan-friendly, organic and Bondi Beach style cafe, Brunch & Cake is perfect for you. It’s located in La Barceloneta on the main road leading to the W Hotel. My husband and I visited here two or three times while staying at Hotel Arts as it was in walking distance and enjoyed our experience each time. My favourite thing on the menu was the chocolate pancakes, of course, but I also did love the bircher muesli which I ordered together with the pancakes and found it was a little too sweet. Don’t make my mistake! 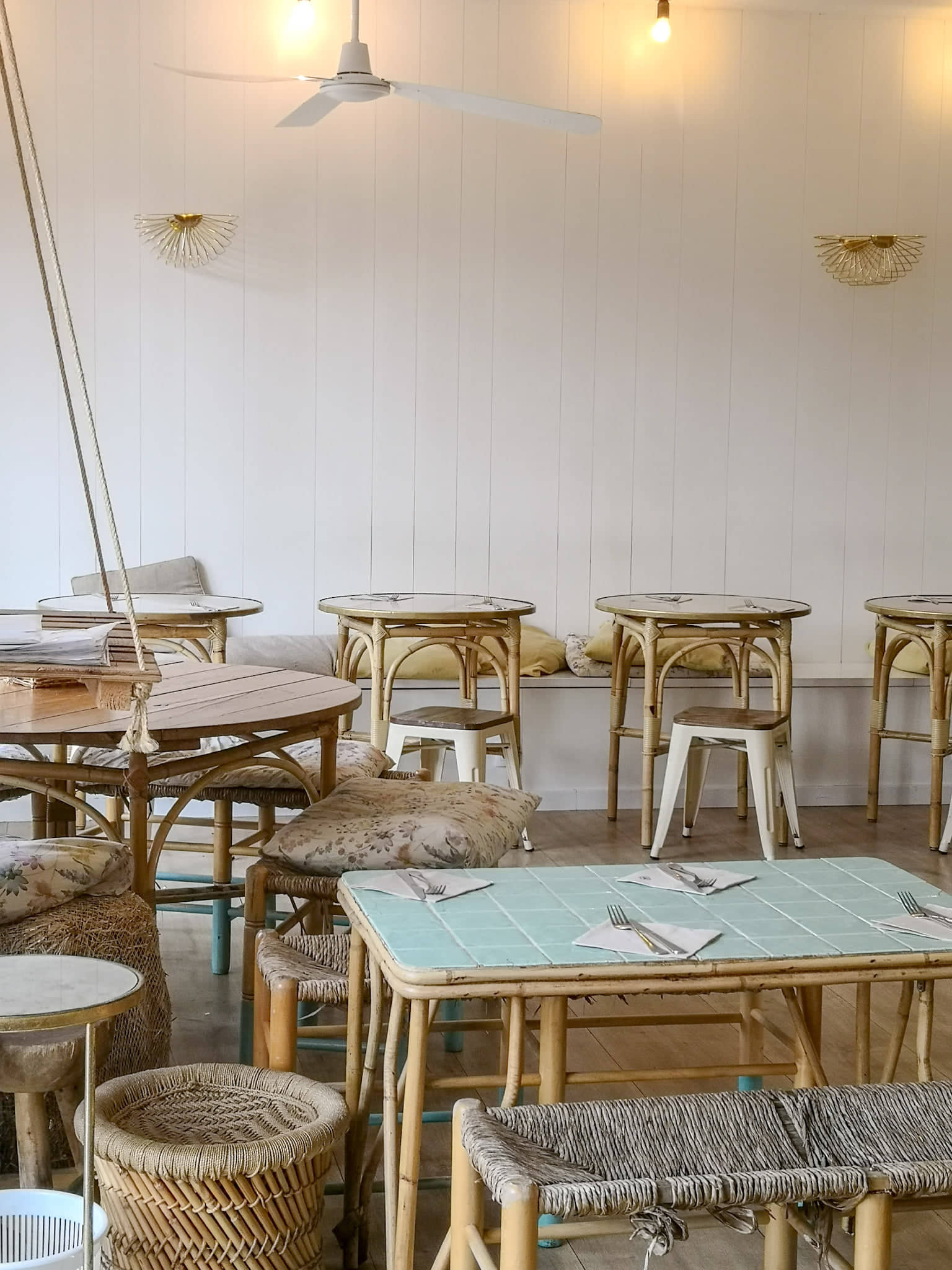 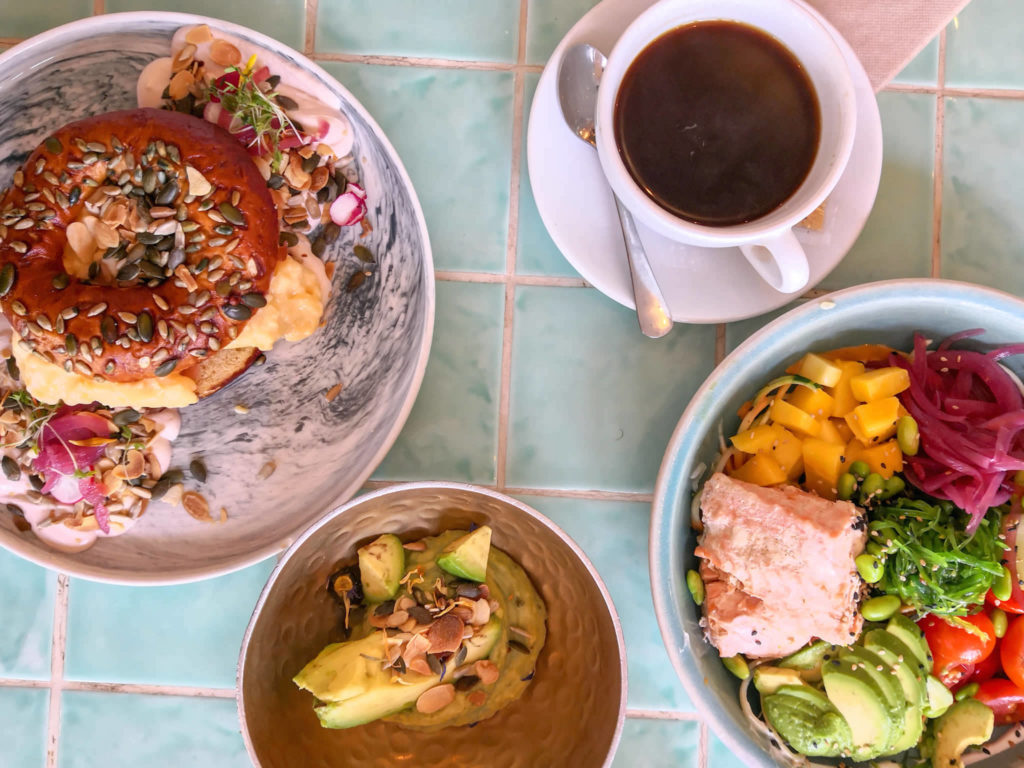 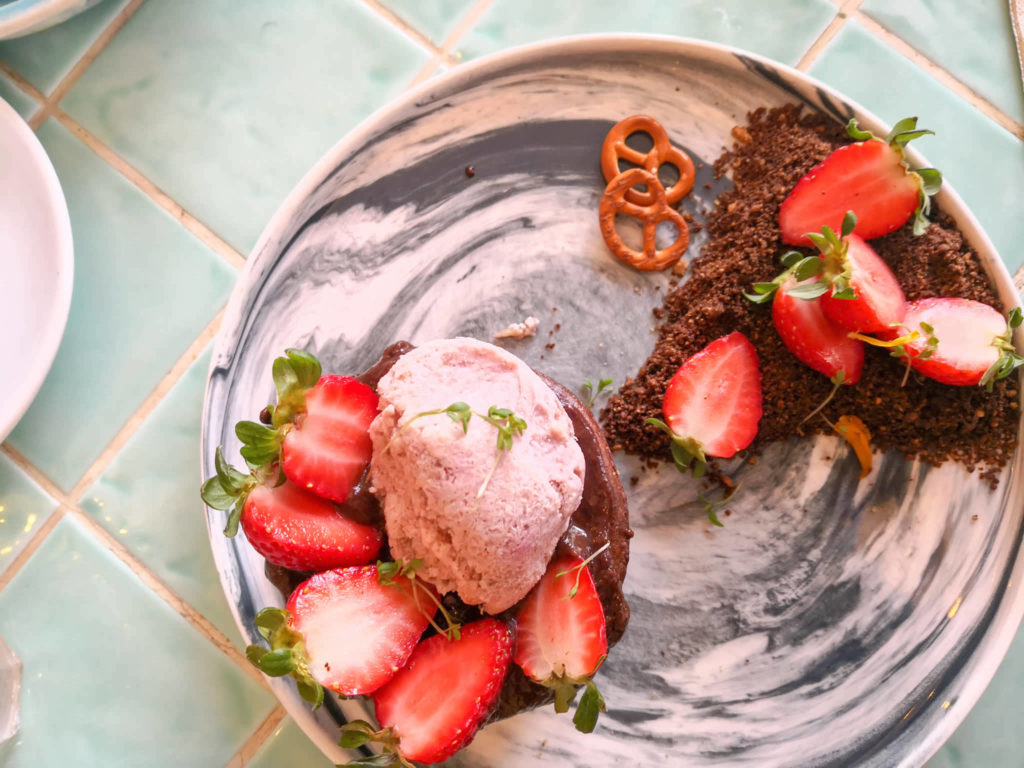 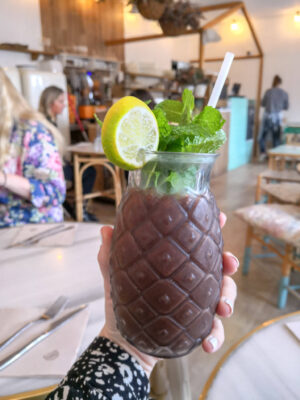 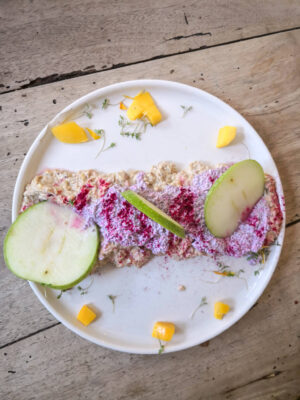 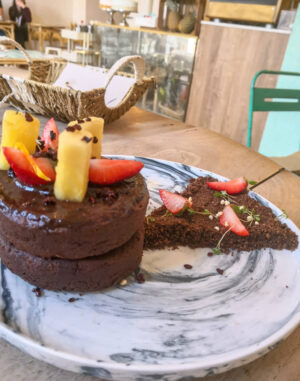 Following a shopping spree on Passeig de Gràcia, Luka and I were looking for the best sushi that was within walking distance. After a quick google search, everything leads to Robata. So, when Luka and I decide on sushi we kind of go ‘all out.’ At Takenoko, the best sushi in Zagreb, the waiters often tell us to chill out with our order because they always assume we’re ordering too much. When it comes to Japanese food, we can eat a lot. Our experience at Robata was no different from any other sushi restaurant we’d visited. I would probably call Robata a more ‘sushi-fusion‘ type of Japanese experience, very similar to Khala in Zagreb. They are a little bit more creative with their sushi whereas Takenoko is more traditional and keep it simple. 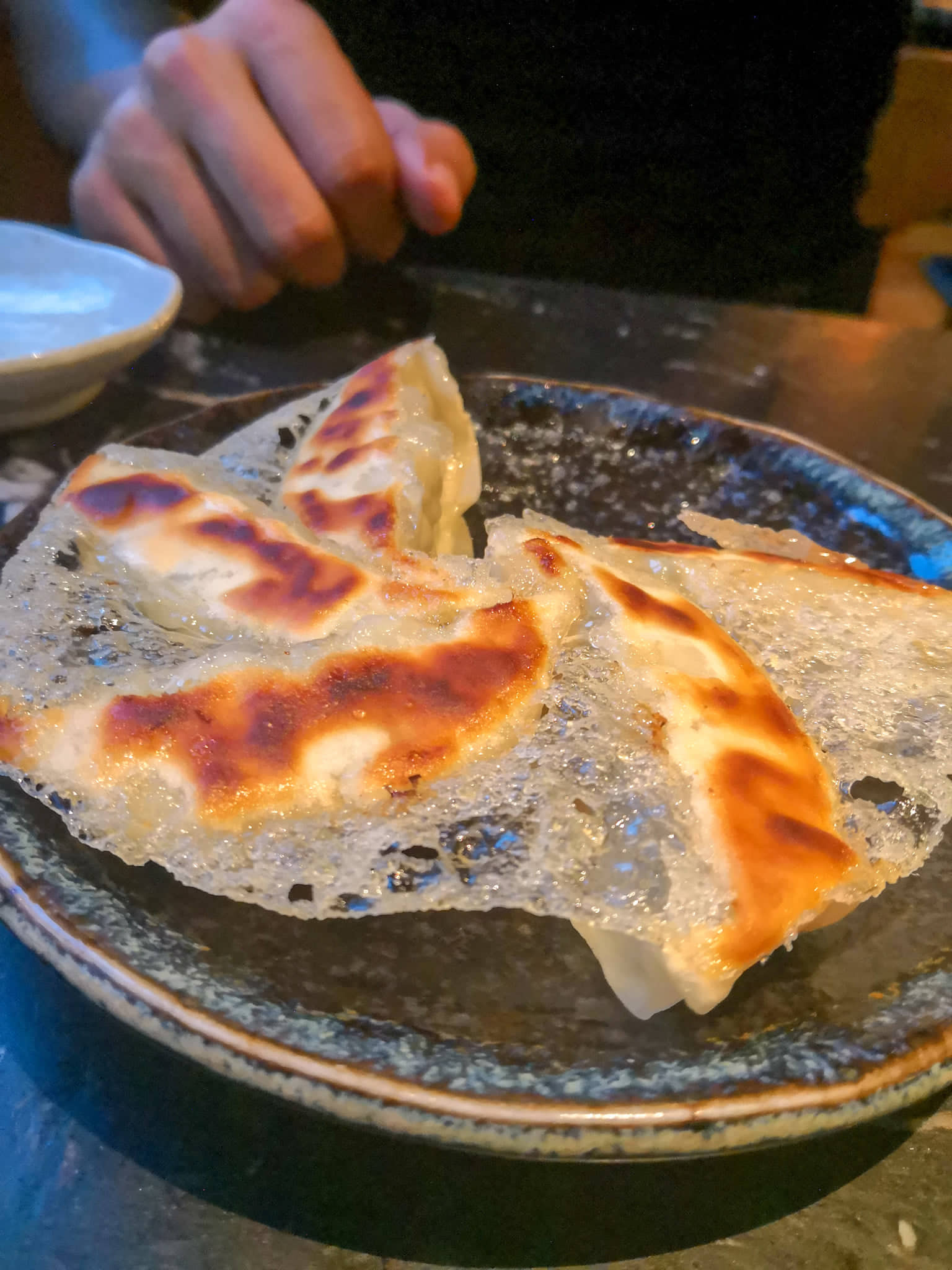 You’d be surprised to hear that lamb cutlets are not really that common in Croatia, I used to be obsessed with them in Sydney. Anytime I come across lamb cutlets during my travels, I make sure they’re ordered. 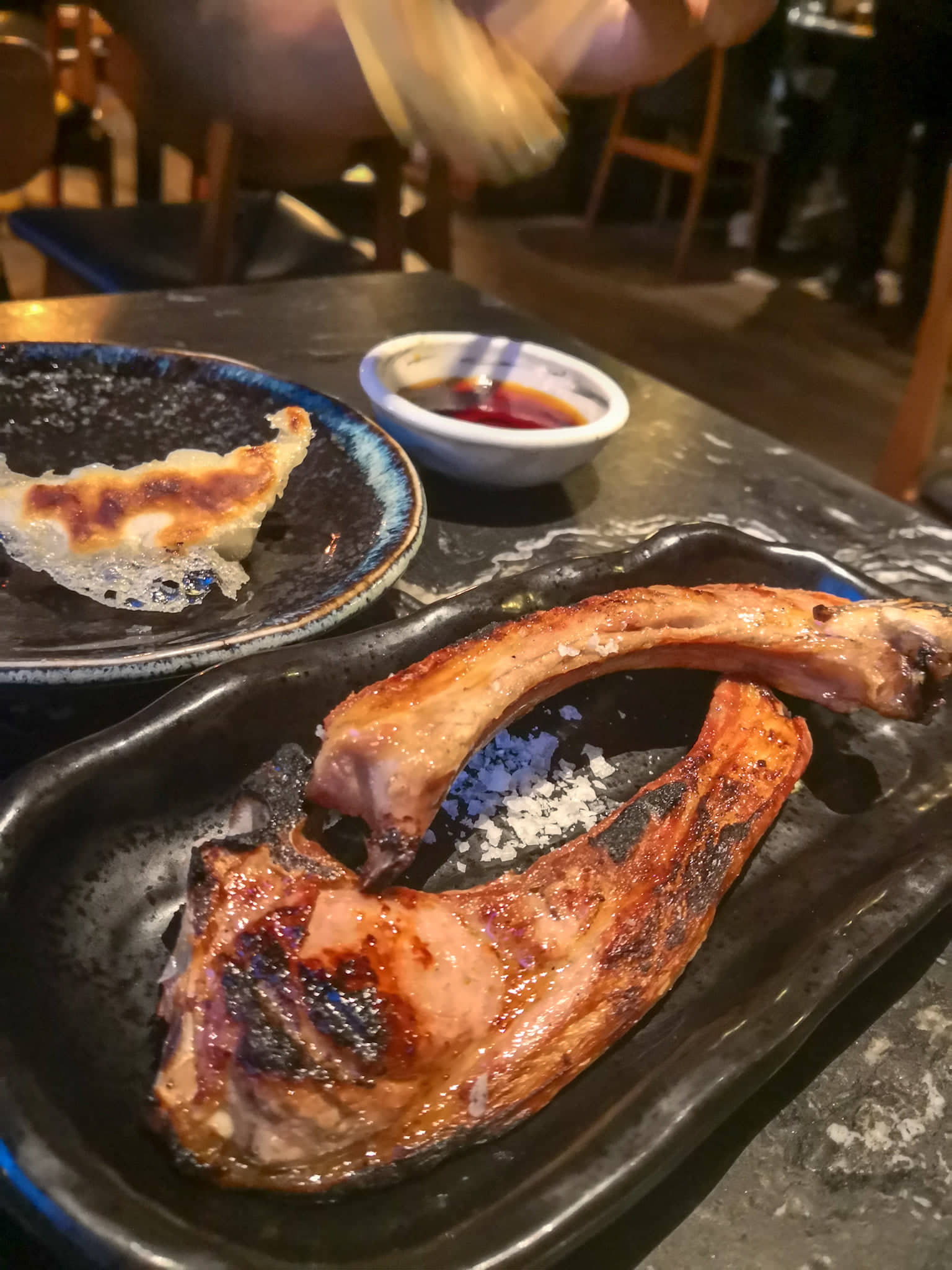 Seared tuna has got to be one of the most underrated dishes in the world, when done right & they certainly were at Robata. Order this for sure if you come here. 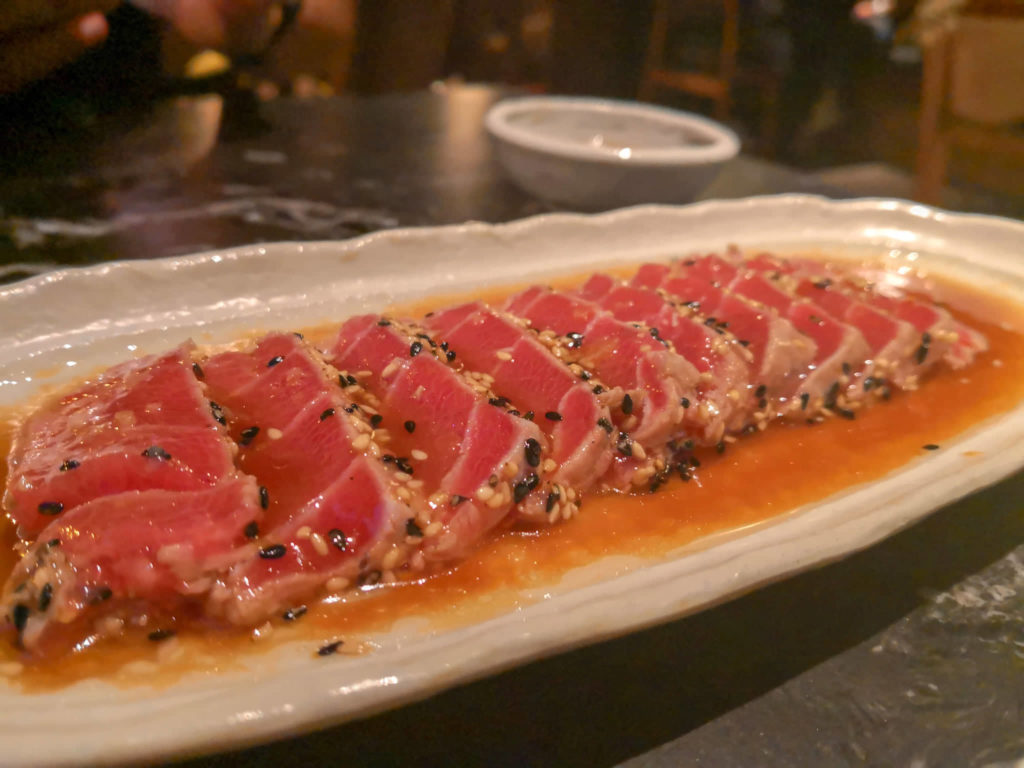 The first time I tried ceviche was in Barcelona a few years ago and I honestly was not a fan. These days, I’ll pick at it for a minute but leave the rest for my husband to finish. 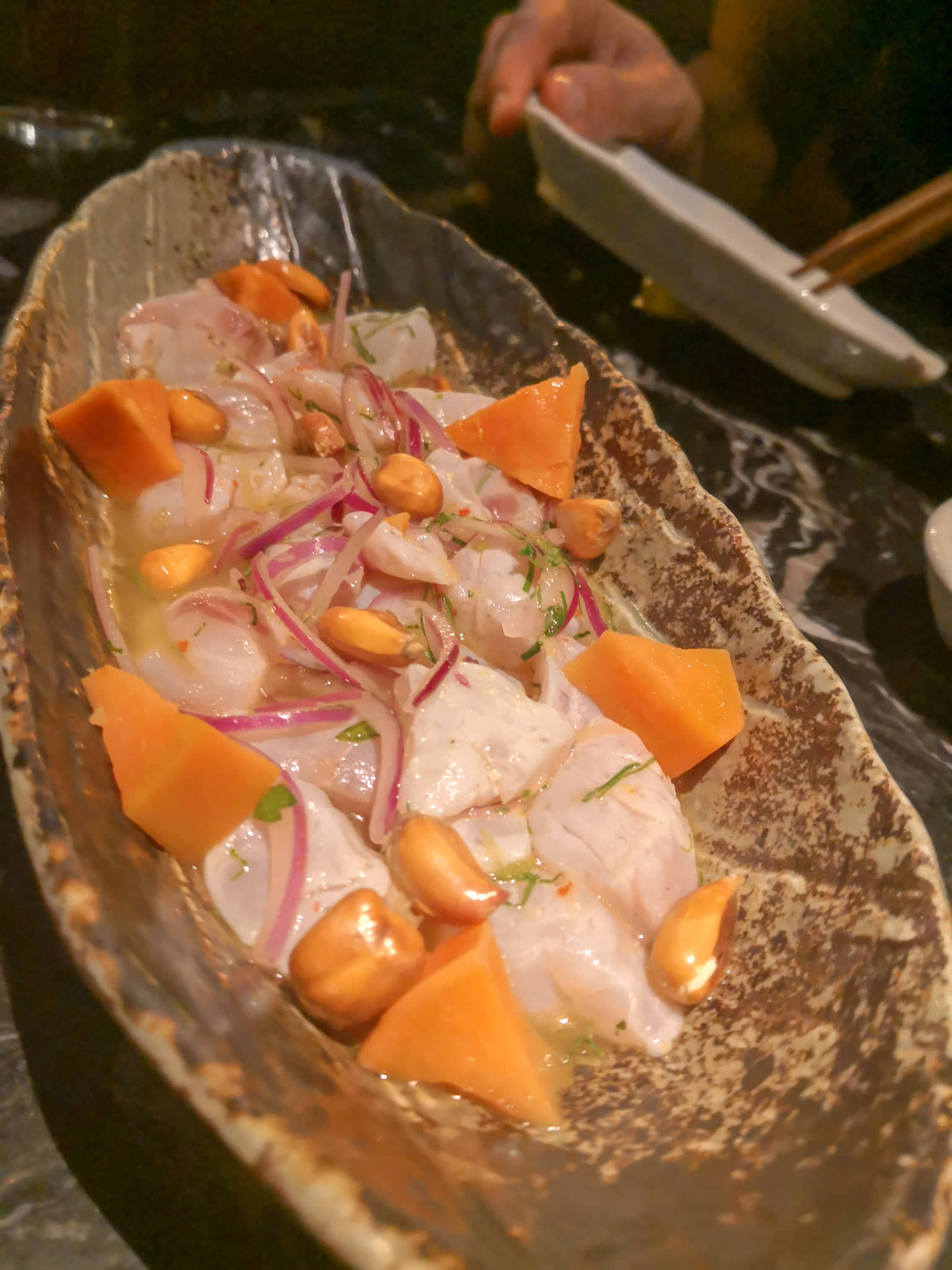 Here were the various types of sushi at Robata… 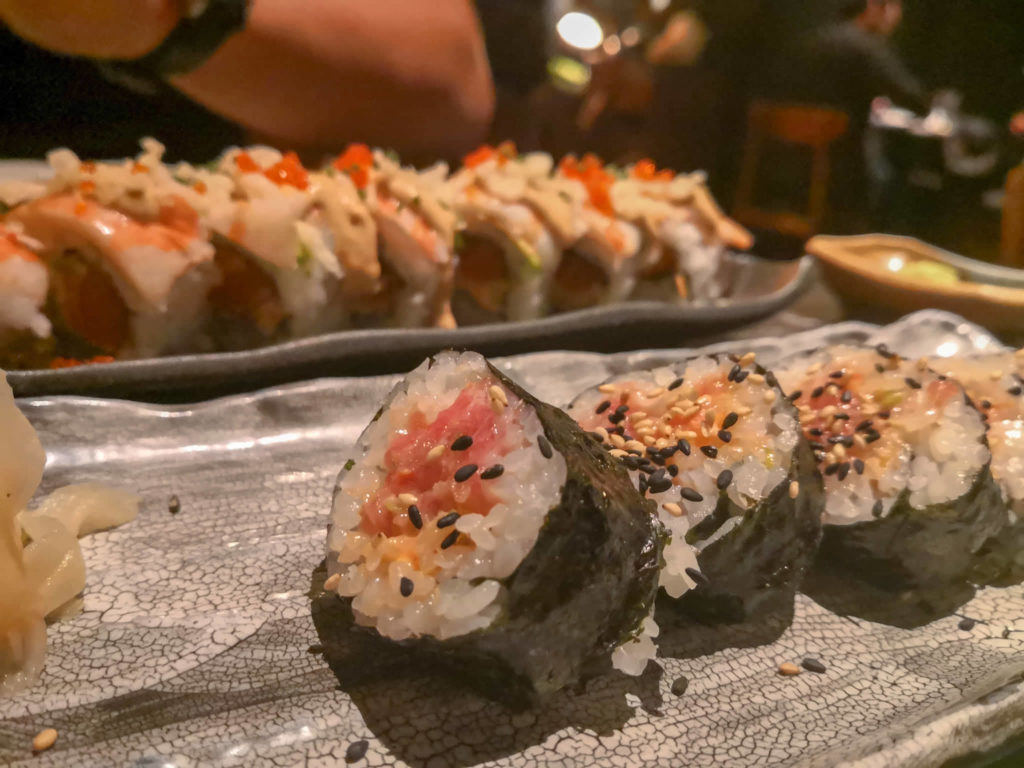 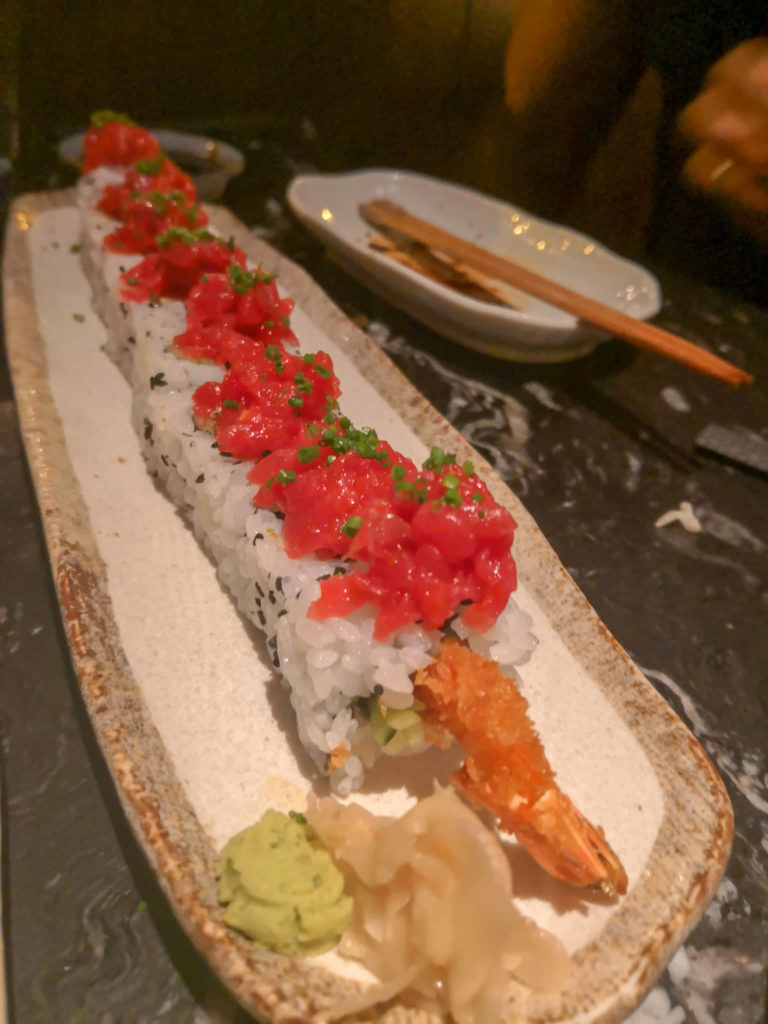