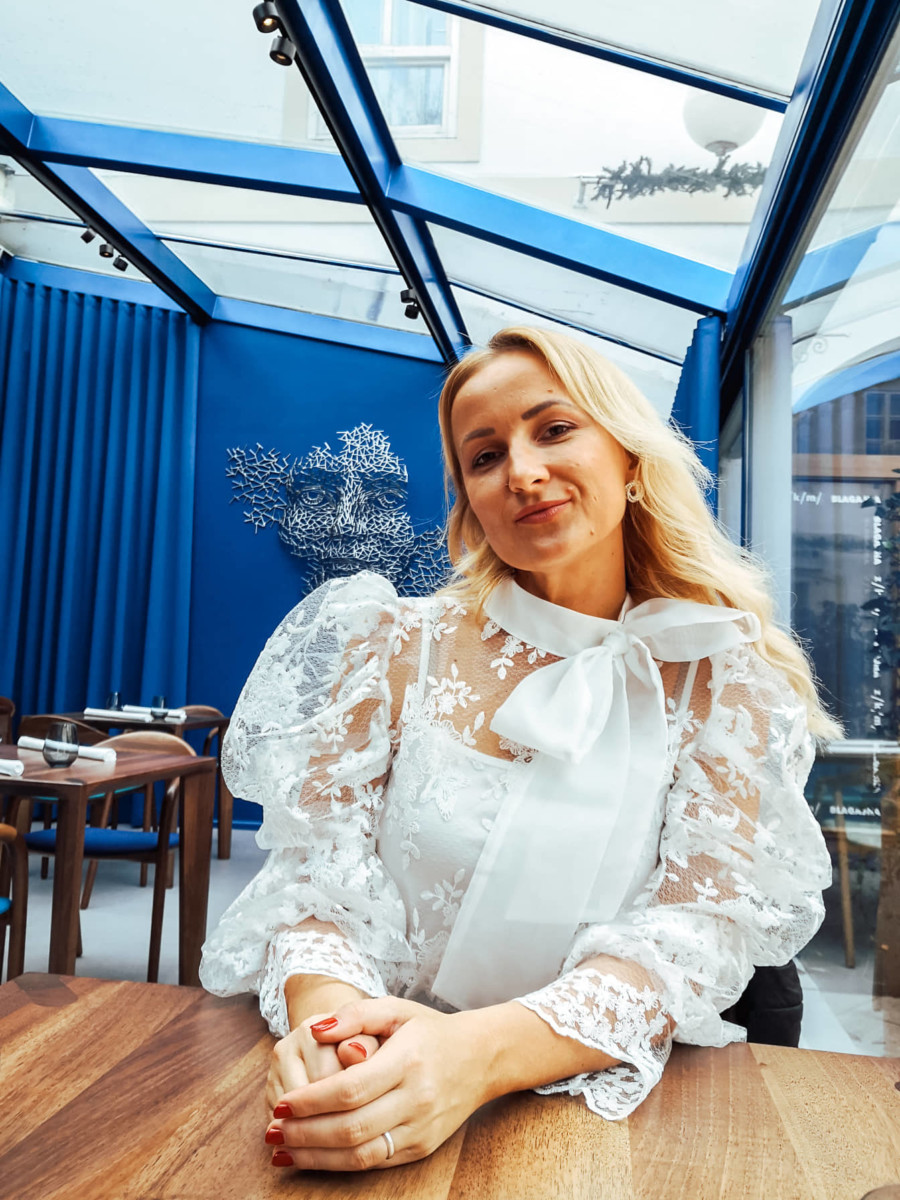 Filip Horvat is my kind of person.

He’s young and ambitious, talented and not afraid to surround himself with people far superior to him. How young and how ambitious you may ask? He’s 25 and just opened his first restaurant in Zagreb called TheAtrium by Filho. Considered as one of the most promising chefs in Croatia, Filip Horvat saw the opportunity to create his own pedestal in Zagreb’s fine dining scene, remodelling every inch of the space, a former popular cafe in the heart of the city, Nikola Tesla Street.

Following an internship in Oslo and no stranger to a well respected kitchen, Filip’s work experience includes The Esplanade, 5/4 (now closed) and Ab Ovo Bistro in Zagreb, and despite being one of the youngest chefs on the scene has already accumulated a well deserved cult-like following. TheAtrium by Filho was Zagreb’s most anticipated restaurant opening for 2019 and in the words of the gifted culinarian himself, it was time that Zagreb had a new top restaurant.

After some research online, I had a sneaky suspicion that I was about to walk into Croatia’s very own version of Albert Adrià’s Enigma Concept in Barcelona all over again, could this even be possible? 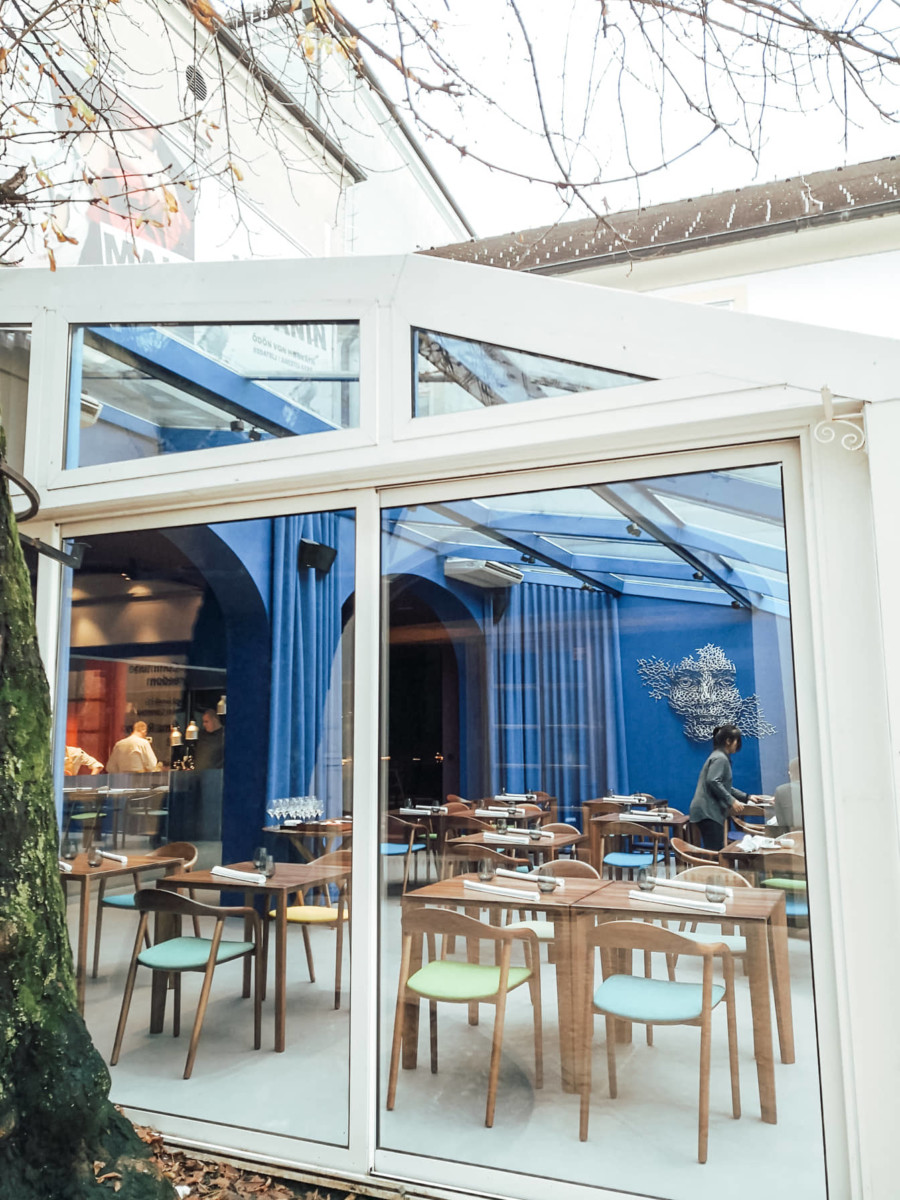 The wonderful world of Filip Horvat is visibly noticeable from the outside courtesy of the floor to ceiling glass windows leaving passersby curious and literally embodying the meaning of ‘air of mystery.’

The interior is sleek, modern and pretentious for Croatia depending on your view of the world.

For me it’s just right and if it weren’t for the glass windows, I would have forgotten that I was in Croatia. The well rehearsed restaurant could operate the way it does anywhere in the world and be successful. Staff are friendly, well spoken and passionate about their workplace, it’s obvious they want it to succeed. 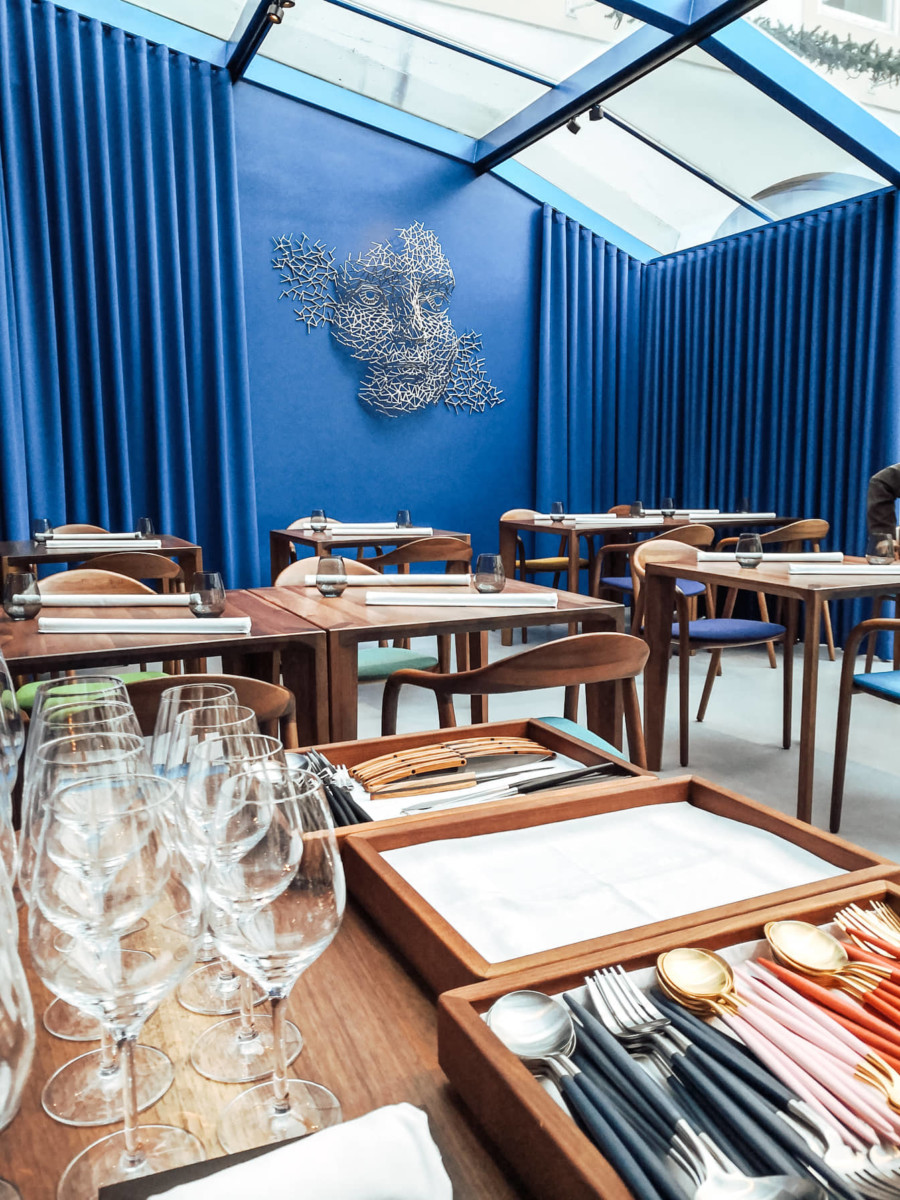 Filip assigned close friend and well known Croatian artist, Nikola Vudraga to create a few pieces for his new domain. The sculpture of a head overlooks the main restaurant area while a mouth sits on the wall around the corner in a more intimate space, one great for an intimate meeting.

There are 69 seats and the entire concept revolves around the numbers 3, 6 and 9. 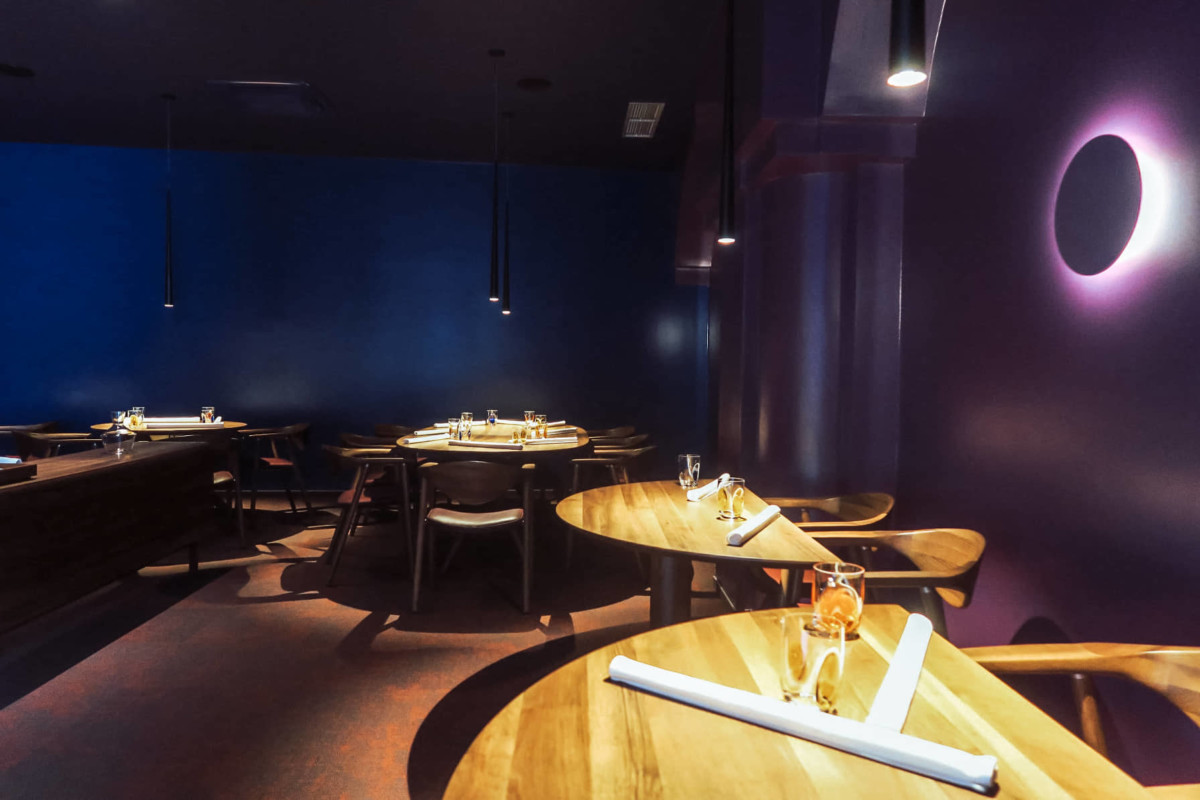 Since I am sober and unfortunately cannot share a bottle of local Croatian wine with my husband, I ask for a non-alcoholic drink and tell the waiter to surprise me. My husband says that he’ll have whatever I’m having. We were pleasantly surprised when a fresh orange, grapefruit and ginger drink arrived to our table and would go to compliment our meals nicely. It may sound boring to you however, I am always happy for another suggestion to my usual sparkling water.

Chef Filip Horvat is pedantic about using only the freshest local produce that he personally sources each morning at Zagreb’s Dolac Market.

So we begin with our entrees.

I was very curious about the black ink squid risotto with creamed potatoes on top, the presentation was something I’d never come across before in Croatia. The squid was fresh and tender while the jelly-like creamed potatoes complemented the entire dish nicely without interfering with the flavours. 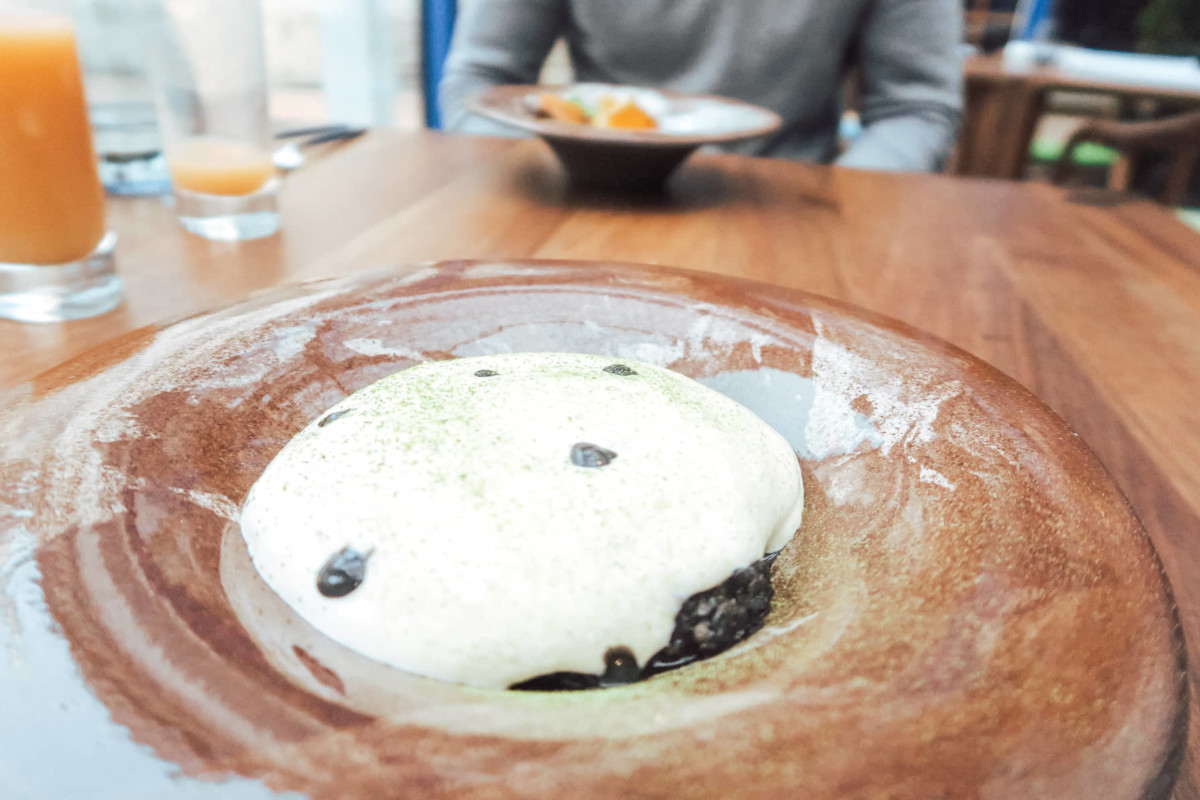 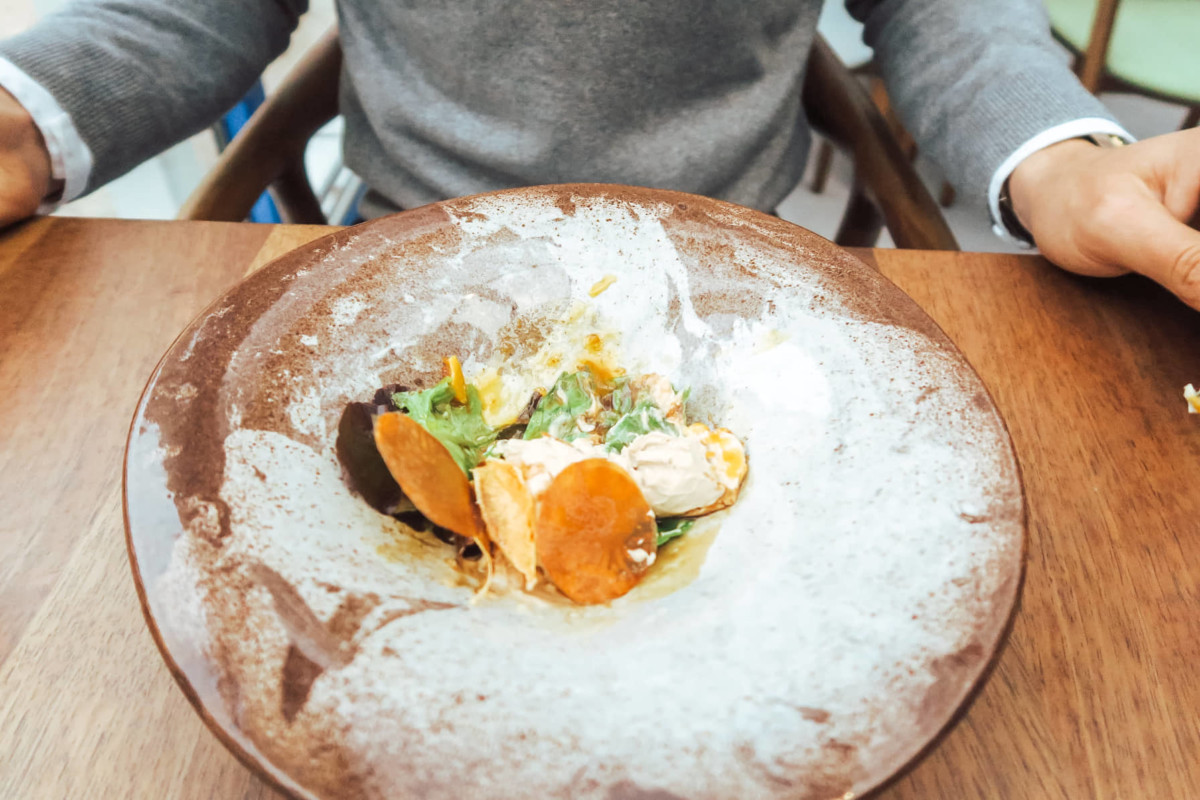 “He’s taken two things that I love eating in Croatia, tuna and ice cream and fused them together,” my husband says. And judging by his silence and facial expressions, he’s thoroughly impressed. 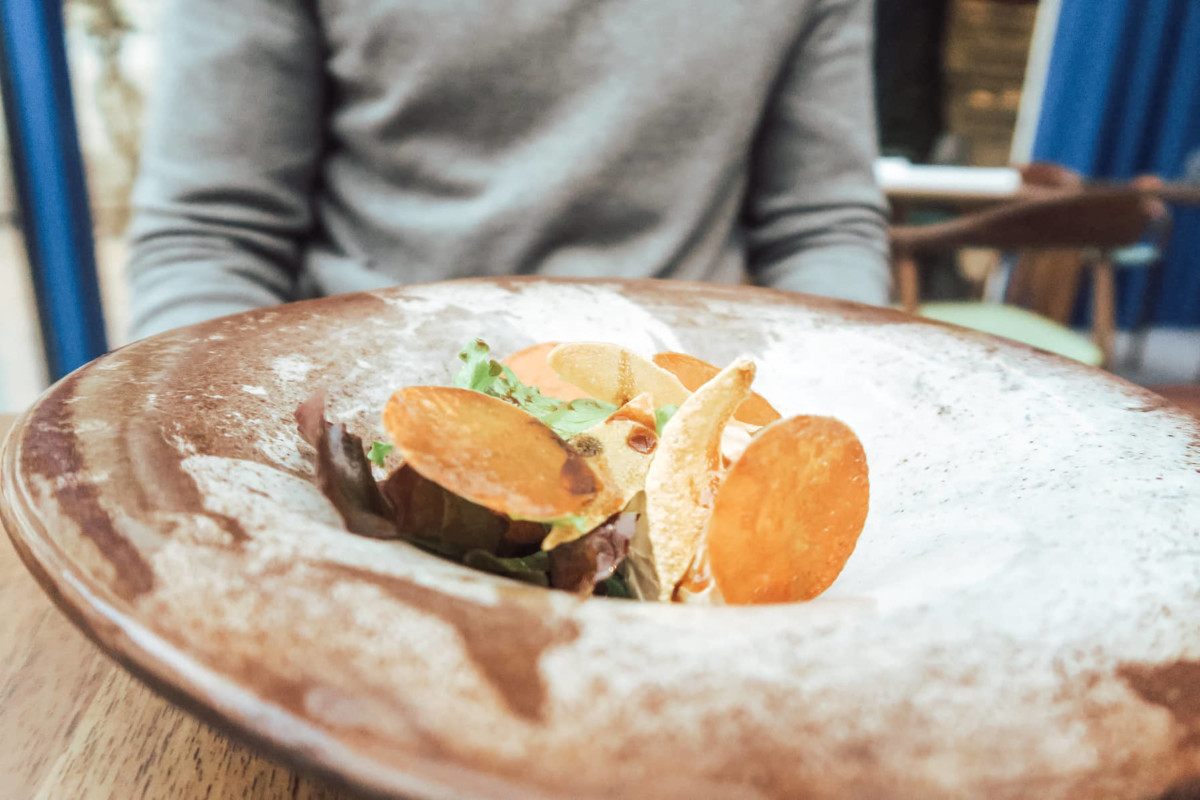 For my main meal, I kept it simple as I hadn’t had a good piece of veal in a long time, since summer in Dalmatia actually. My meal comes with a bowl of creamy mash that I share with my husband. 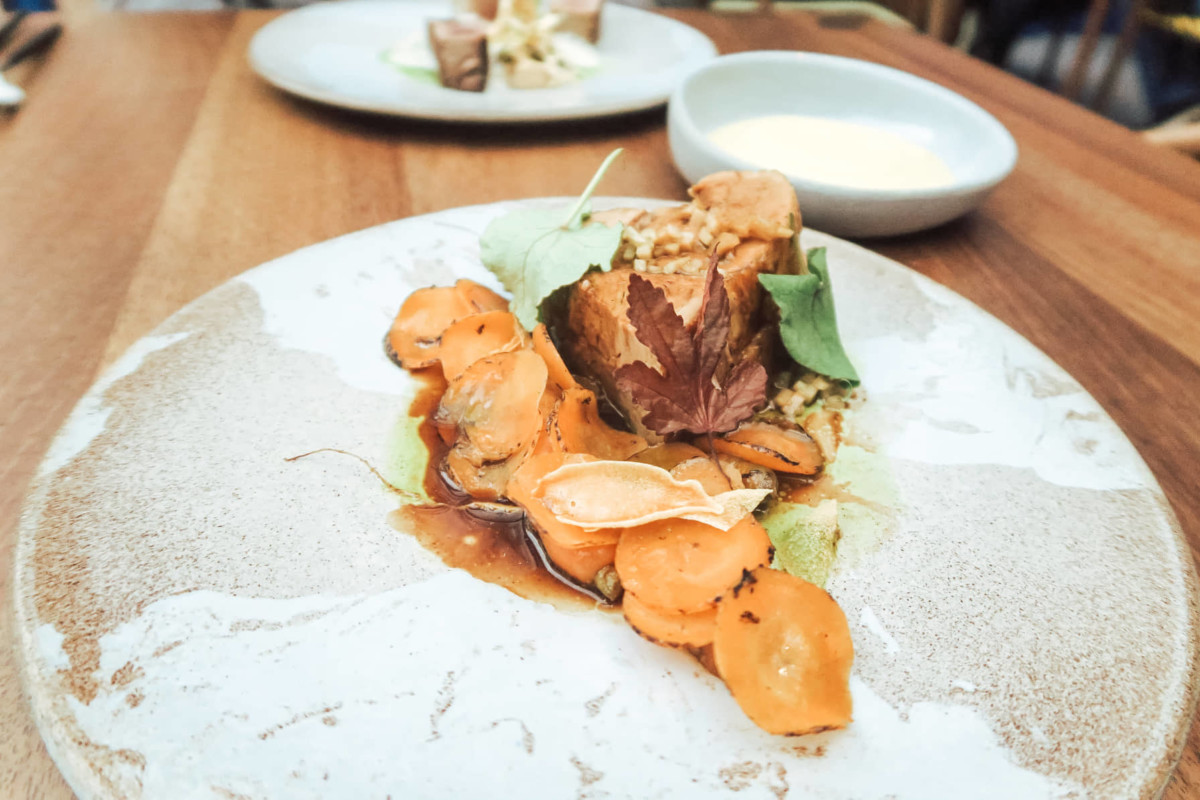 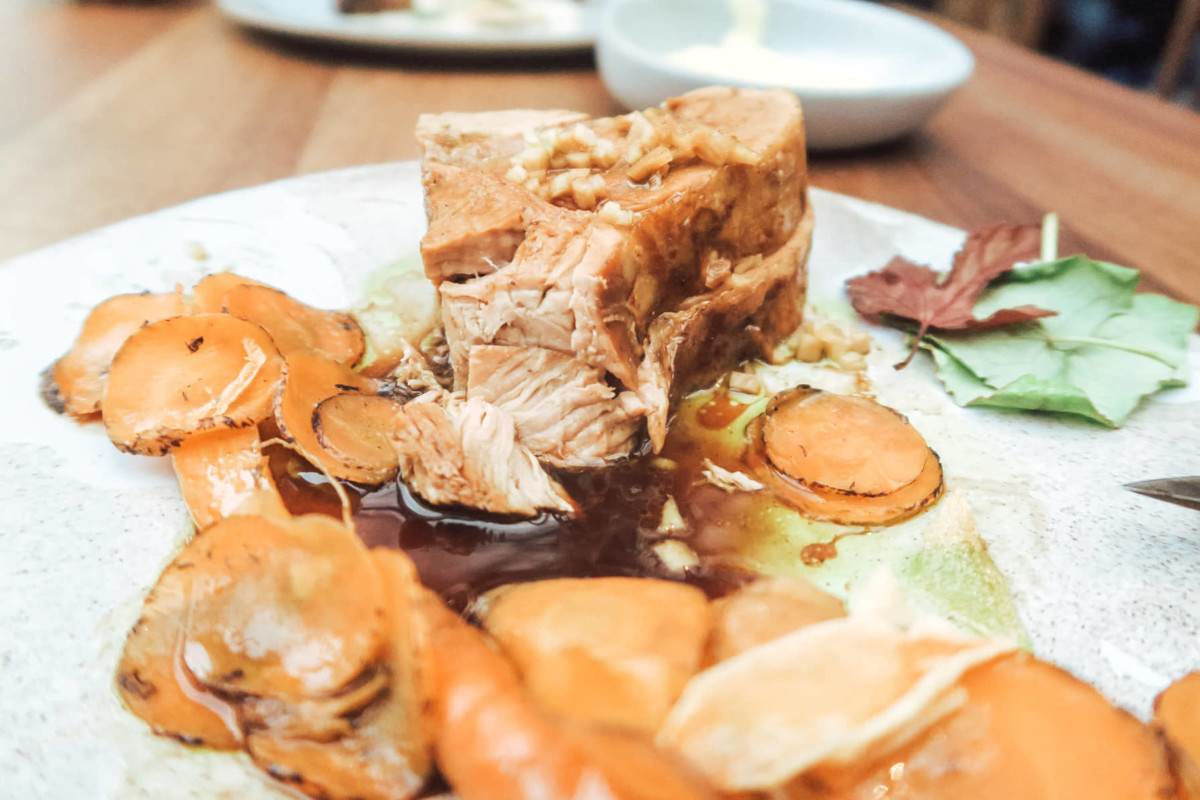 Filip Horvat’s slow cooked veal is a testament to his attention to detail and perfectionism. The plate literally looked like a work of art while the veal simply melted in my mouth. I’ve come to realise I use this analogy a lot but there’s no other words for it, it was simply divine.

The most expensive meal on  TheAtrium by Filho menu is the beef steak at 180kn (24€) and my husband couldn’t decide between the beef steak or tuna steak. The waiter recommends the tuna steak as he’s confident that he’ll be rather surprised… A good tuna steak in Zagreb?

My husband can’t say no to a good piece of tuna steak so that’s what he orders. 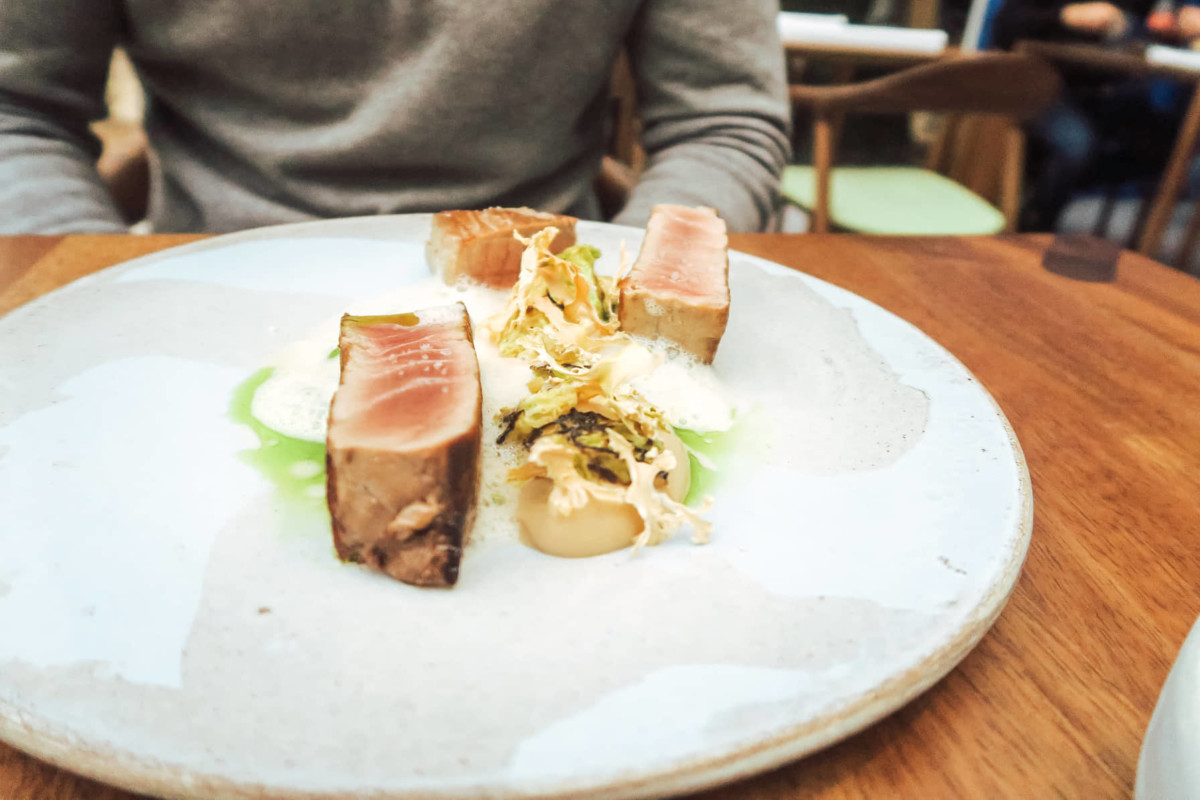 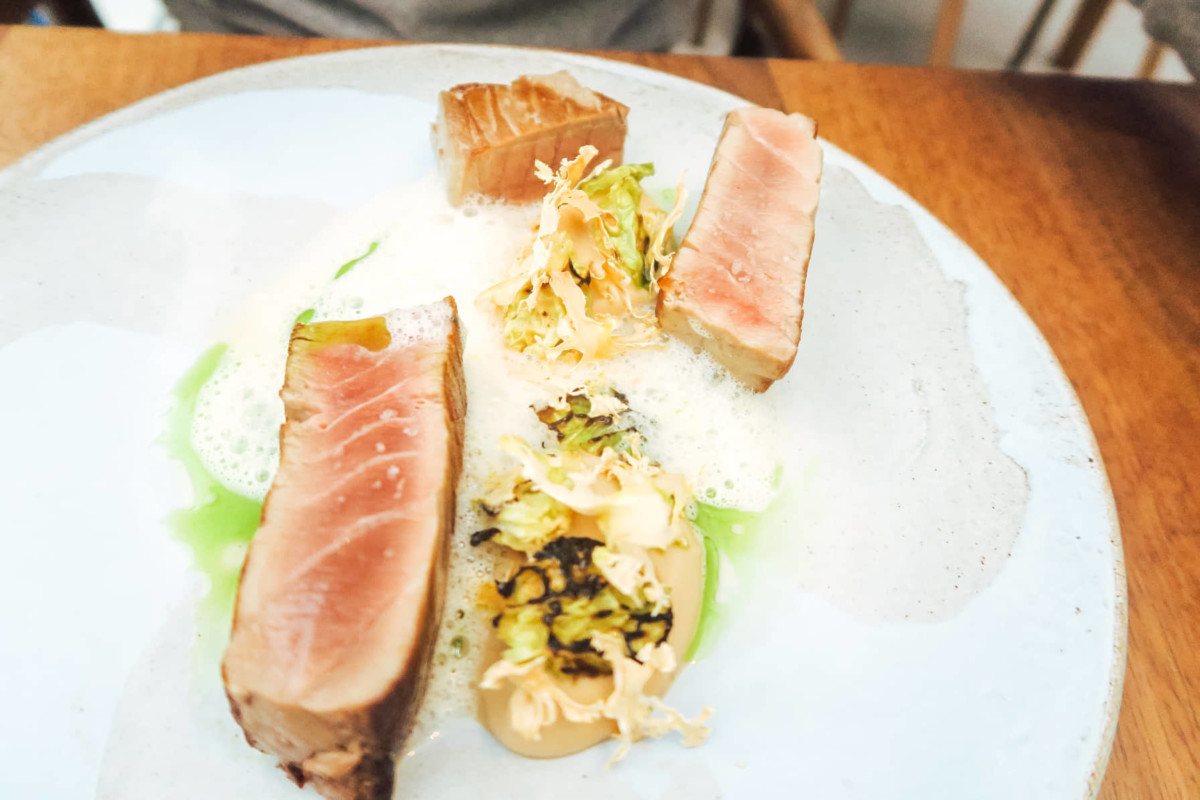 As the waiter walks away he tells me that he forgot to tell him how he likes his tuna steak cooked. I tell him not to worry about it, I’m sure it will be cooked medium rare.

“You need to try this right now,” followed by, “this is literally the best tuna I’ve ever had in this country…” I take a bite and am absolutely shocked. The tuna steak is fresh and cooked perfectly medium rare, setting the bench mark for tuna from now on.

“He’s taken a tuna steak and made it sexy!” Okay, my husband needs to calm down but was left completely impressed by Filip Horvat’s modern take on Croatian cuisine.

I rarely ever say no to dessert and after such a great entree and main, why stop there?

TheAtrium offers two desserts only and I ask for one of each. 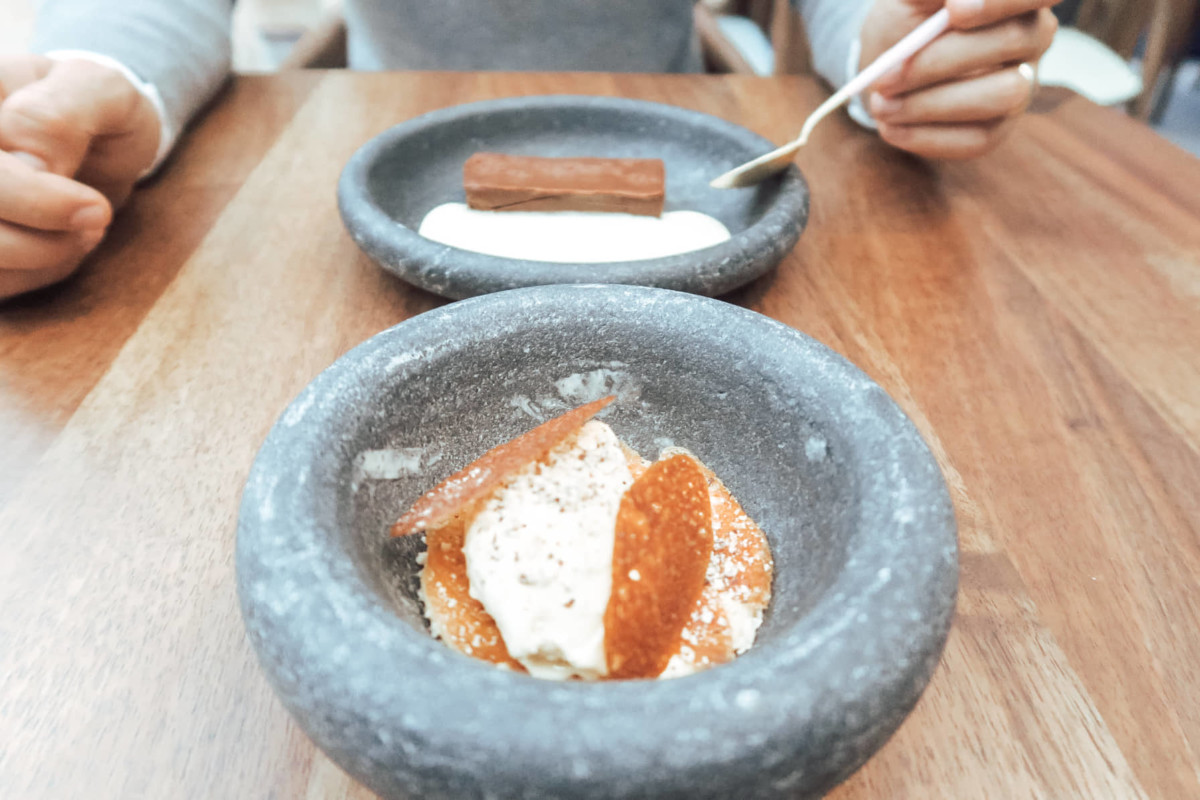 One dessert is a passionfruit icecream and cream fusion, all flavours compliment eachother nicely without being too sweet or too tangy, the biscuit bits add some texture, creating the perfect synergy in your mouth.

The second dessert is a chocolate cake with vanilla cream, so simple. The chocolate slab is dense, moist and perfectly paired with the vanilla cream. It would also go down well with a coffee if you were in the mood for stopping by for a quick drink. 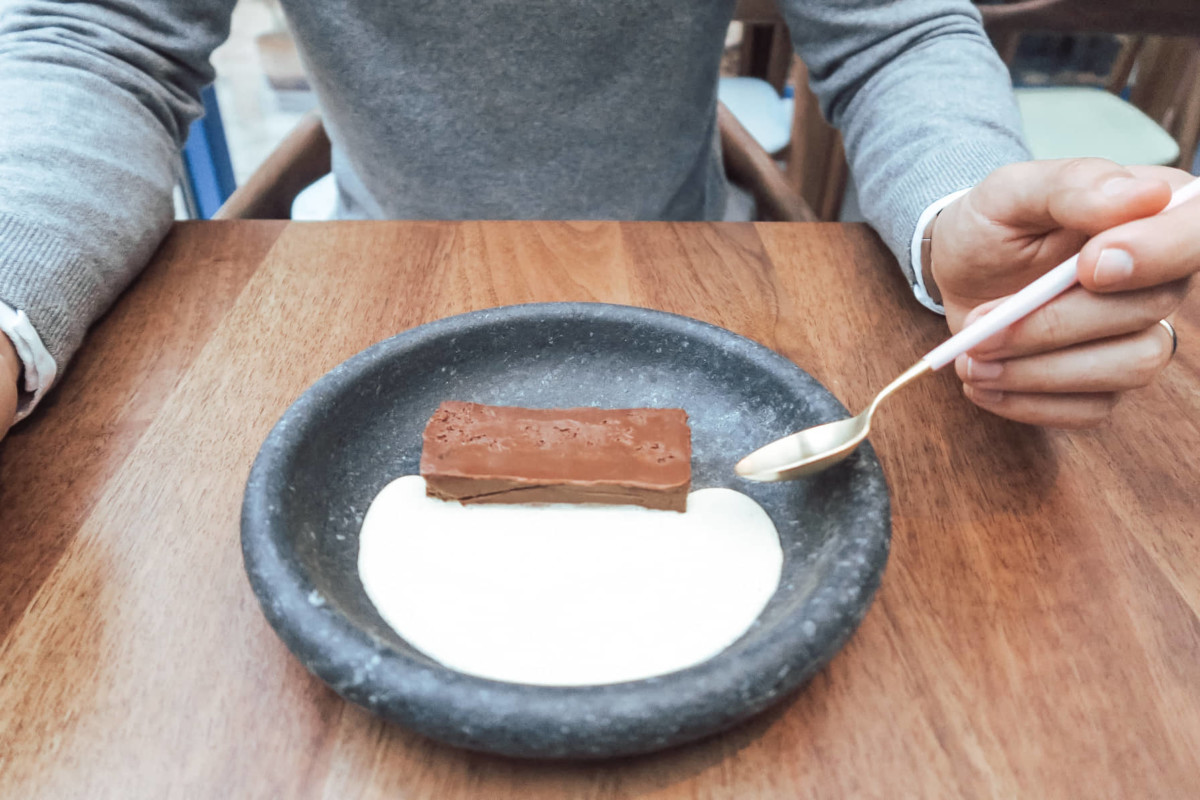 This is one of my final restaurant experiences in Croatia before I move back to my natural habitat, London. I must admit that I’ve been looking forward to moving back to London, a far more exciting city than the whole of Croatia combined. When I first heard about TheAtrium by Filho, I thought it was too good to be true. It’s not often you come across a young and ambitious person in Croatia with the tools to execute their vision, most young people don’t execute in Croatia, they evacuate. It’s a country that lacks a lot for those who want to experience the finer things in life on a daily basis and not just for special occasions. There are not enough options and thats why I personally look forward to travelling outside the country the most. I am all for new restaurants in Zagreb, I believe that there is a lot of room for fine dining and exciting gastronomic experiences which is why I’d love to see Filip Horvat succeed with TheAtrium. He has a great team and staff beside him and the culinary skillset to go all the way to being the youngest chef in Croatia to receive a Michelin Star.